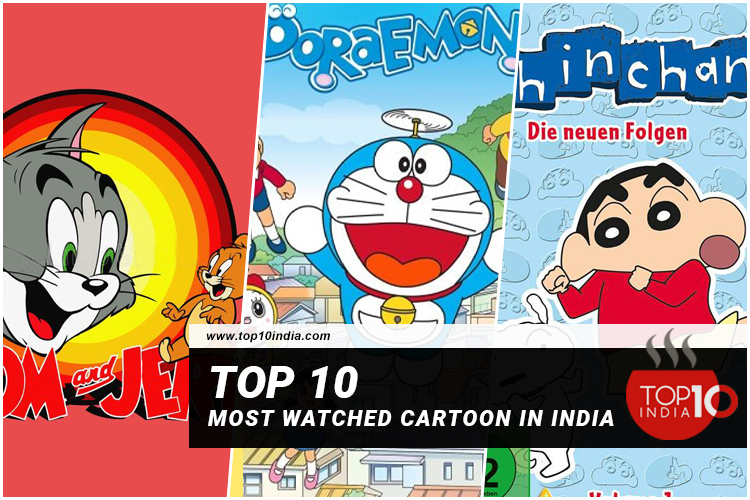 Top 10 Most Watched Cartoon In India

Top 10 Most Watched Cartoon In India: Tom and Jerry is the number 1 most watched cartoon in India that revolves around the fight between tom and jerry. Today’s youth rarely looks away from their smartphones and are engrossed in social media and Netflix. However, many of us, particularly those born in the 1990s, spent our childhoods watching numerous animated Hindi cartoons on television. There is no better method to calm a baby from his frantic avatar than to show him cartoons. Cartoons may cheerfully encourage your children to calm.

Top 10 Most Watched Cartoon In India

Kids have long found cartoons to be a major source of amusement, inspiration, that allows us to help you narrow down your choices on the basis of the attractiveness of cartoons. Things have changed drastically in recent years, as we now witness children of today’s generation constantly watching the latest cartoons. However, we, particularly the children of the 1990s, have also spent our entire childhood watching Hindi/English cartoons on our televisions. Let’s begin our journey through India’s Top 10 Most Watched Cartoon in India.

Tom and Jerry are at the top of the list of famous cartoons in India because they have been amusing us for more than 50 years, not only in India but all around the world. The plot centers around Tom, a cat, and Jerry, a lovely mouse, who are constantly fighting and seeking vengeance. This is India’s best cartoon, which is popular not just among children but even among the elderly.

Doraemon is a popular Indian animation that depicts the daily adventures and tribulations of Nobita, a young boy who experiences frequent bullying by his peers, low marks in school, and emotional breakdowns. It has the highest TRP in India. He has a robotic cat named ‘Doraemon’ who assists Nobita in sorting things out with his devices. Shizuka, Gian, Suneo, Dorami, and more characters appear in this popular Indian animation.

Shinchan is without a doubt everyone’s favorite show! Shinchan is a story about a youngster who tries everything he can to anger his parents but is adored by his audience, making it one of India’s best cartoons. This is also regarded as one of the funniest and most amusing cartoons ever produced. Shinchan’s comedic acts are sure to make you laugh out loud during the show.

I am confident that no one will be unfamiliar with this individual. Mr. Bean is well-known not just in India, but also throughout the world. The guy makes others laugh without saying anything since his actions are plenty. The show is available in two forms: a TV series and an animated version. It is one of India’s best cartoons, depicting the lives and antics of Mr. Bean, a man with a mole.

No 5. Oggy and the Cockroaches

This well-known Indian animation requires no introduction because it is extremely popular among children. Bheem is a strong and powerful character in the program. Bheem always comes to the villagers’ aid when they are in need. He just needs some laddoo to refuel his batteries, and he’ll be fine. We’ve all heard of Bheem, the Pandava sibling who is known for his bravery, and this Indian cartoon was inspired by him.

This popular Indian cartoon reminds me of Hattori’s “Ding Ding Ding Ding.” The cartoon has a large following among children, and we can’t deny that we spent most of our childhood watching it. Ninja Hattori is one of the best cartoons in India, appearing in the Top 10 Cartoons in India list. Characters like Kanzo Hattori, Shinzo Hattori, Shishimaru, Kenichi Mitsuba, and others are crucial ones in the show.

The main characters in this popular Indian animation are Motu, an obese food freak, and Patlu, a lean guy, as the name says. The tale centers around these two creatures who live in Furfuri Nagar, and it is regarded as the best cartoon in India for children. The show is fascinating because Motu is the one who creates the problems, and Patlu always fixes them by generating humorous situations.

This is one of India’s most well-known cartoons, which most of us grew up watching. This is one of the longest-running shows. The plot centers around Ash Ketchum, a youthful trainer of the fictitious Pokémon species. There are several characters in addition to Ash, including Pikachu, Misty, Brock, Jessie, and others. The Ash-Pikachu duo, which everyone adores, is what makes this show one of the best cartoons in India.

The primary character of the anime is Hagemaru, a child with only three hairs and the broadest brows. This popular Indian cartoon has a large fan base since it has a lot of amusing scenes. Hagemaru’s school life and daily experiences are the focus of the cartoon.

Who is the No 1 cartoon in India?

Tom and Jerry is the No 1 cartoon in India.

Which cartoon has the highest TRP In India?

Doraemon has the highest TRP In India.

Which Cartoon was banned in India?

Shin Chan was banned in India.

Published in A to Z, Cartoon, Entertainment, News and Social