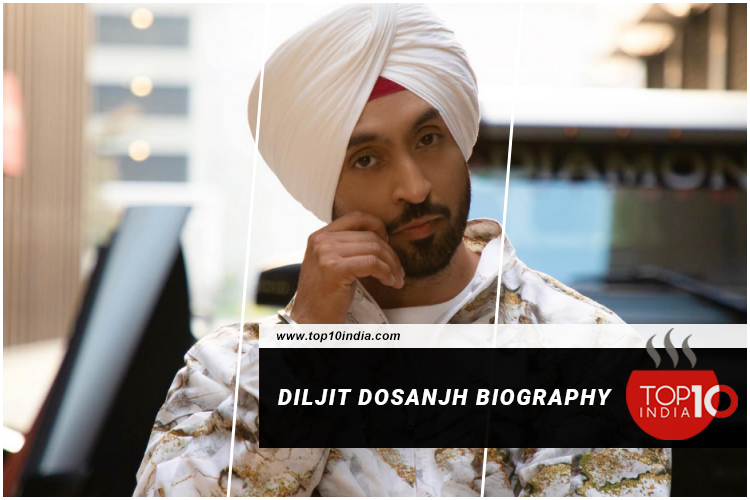 Diljit Dosanjh Biography | Net Worth | Punjabi Movies | Social Life: Daljit Singh, popularly known as Diljit Dosanjh, is an Indian singer-songwriter, actor, and television presenter who works in Punjabi and Hindi cinema. He is recognized as one of the leading artists in the Indian music industry. He also acts in Punjabi movies, with many of them being commercially successful, including Jatt & Juliet, Jatt & Juliet 2, Punjab 1984, Sardaar Ji, Ambarsariya, Sardaar Ji 2, Super Singh, Sajjan Singh Rangroot, and Shadaa – which are among the most successful Punjabi movies in history.

He made his Bollywood debut in 2016 with the crime thriller Udta Punjab for which he earned the Filmfare Award for Best Male Debut. However, this was followed by films that failed to propel his career forward in the Hindi film industry. This changed with his supporting role in the comedy Good Newwz (2019), for which he received a nomination for Best Supporting Actor at Filmfare. As of 2020, he has won the most five PTC Awards for Best Actor. He has also appeared as a judge in three seasons of the reality show Rising Star. In 2020, Dosanjh entered the Social 50 chart by Billboard, following his 11th album G.O.A.T. . Also, the album entered the top 20 in Canadian Albums Chart.

Diljit Dosanjh was to a Sikh family in the village of Dosanjh Kalan in Phillaur tehsil, Jalandhar district, Punjab, India. His father, Balbir Singh, is a former employee of Punjab Roadways, and his mother, Sukhwinder Kaur, is a homemaker. He has two siblings, one elder sister and one younger brother. He spent his early childhood in Dosanjh Kalan. He then moved to Ludhiana, Punjab, where he completed his formal education, including graduating high school from Shri Guru Harkrishan Public School. While still in school, he began his singing career by performing Kirtan (Sikh religious music) at local gurdwaras.

2011 saw Dosanjh’s entry into mainstream Punjabi movies. His debut film in the lead role, The Lion of Punjab, was released in February 2011. Though the film flopped at the box office, his track “Lak 28 Kudi Da,” from the movie’s soundtrack, was a major success. The track, featuring Yo Yo Honey Singh, reached number 1 on The Official Asian Download Chart in the USA published by the BBC. In July 2011, his second Punjabi movie Jihne Mera Dil Luteya, was released. The film, also featuring Gippy Grewal and Neeru Bajwa, did good business. Dosanjh gave vocals to six of the twelve tracks in the film’s soundtrack.

Dosanjh next starred in the social drama Udta Punjab (2016), his first Hindi film. With a worldwide collection of ₹996.7 million, the film proved to be a commercial success. Directed by Abhishek Chaubey, the film deals with substance abuse in the Indian province of Punjab. Co-starring alongside Kareena Kapoor, Shahid Kapoor, and Alia Bhatt, Udta Punjab generated controversy when the Central Board of Film Certification deemed that the film represented Punjab negatively and demanded extensive censorship before its theatrical release. However, the Bombay High Court later cleared the film for exhibition with one scene cut. Dosanjh also sang the song “Ik Kudi” for the film. In a highly positive review, The Hindu said that Dosanjh was “successful” in delivering a “highly hitting performance.”

Diljit Dosanjh started his career as a Punjabi singer in 2003-04 with the album Ishq Da Uda Adaa and Dil. Both albums were a big hit. From 2004-2010, he gave many hit albums and hit songs. His album Smile was released in 2005 with songs Nachdiyan Alharan Kuwariyan and Pagan Pochaniyan Wale. He is also a television personality as he was a judge on singing Reality Show Rising Star for seasons 1, 2, and 3. Continually experimenting with new musical ideas and images, Dosanjh’s musical and performance style is the subject of analysis and scrutiny from critics. Dosanjh grew up learning music from Gobinder Singh Alampuri and Kartar Singh, and his initial work reflected their style. His later collaboration with Honey Singh lent a different dimension to his music. The composers Jaidev Kumar, Sukhpal Sukh, Sachin Ahuja, Pavneet Birgi, Jassi Bros Bhinda Aujla, and Tru Skool have influenced him. His goal is to make a Punjabi song that becomes a worldwide hit like the Korean single Gangnam Style.

Dosanjh started an NGO called Saanjh Foundation, focusing on underprivileged children and seniors, contributing to orphanages and nursing homes. It also endeavors youth empowerment with self-confidence, well-being, anti-bullying, mentoring, and career development. It takes its name from the second part of Dosanjh’s last name, which loosely translates “amity.” He launched this organization on his birthday in 2013.