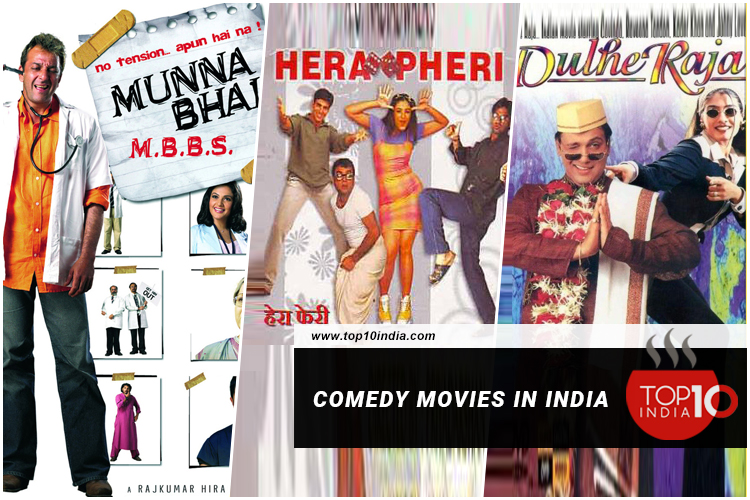 Comedy Movies In India: Comedy is a communal hug – a “jaadu ki jhappi” as Raju Hirani’s Munnabhai would have it – that Bollywood has churned out in the best of times and bleakest of times. When Hindi cinema is at its inspired high watermark madness, it can be a lot of fun – both for the audience and filmmakers and crew behind the making of the film. Thinking of Half Ticket, Jaane Bhi Do Yaaro, or Andaz Apna Apna, one often wonders if the cast and crew had as much fun making them as we had to watch them. But in many cases, we do know that it was not all play and party on the sets.

A comedy film is a category of film in which the main emphasis is on humor. These films are designed to make the audience laugh through amusement and most often work by exaggerating characteristics for humorous effect. Films in this style traditionally have a happy ending.

Murli Prasad Sharma, nicknamed Munna Bhai, is a goon. His father, Hari Prasad Sharma, had wished him to be a medical doctor, so he creates the faux Sri Hari Prasad Sharma Charitable Hospital, named after his father, and pretends to live following this wish whenever his father and mother Parvati visit him in Mumbai. One fateful day, however, Munna’s plan goes awry when Hari meets an old acquaintance, Dr. Jagdish Chandra Asthana, and the two older men decide to betroth Munna to Asthana’s daughter, “Chinki”. At this point, Munna’s cover is blown, and Asthana insults Munna’s parents and calls them “fools” for being ignorant of Munna’s real life. Hari and Parvati, aghast and later heartbroken, leave for their village

The film begins with Shyam (Suniel Shetty), a guy searching for a job at a bank. He was unable to get the job despite his late father who worked there accidentally bumps into a guy named Raju (Akshay Kumar). Shyam mistakes Raju for a pickpocket and begins to chase him. However, he discovers the truth and vice versa occurs with Raju chasing Shyam mistaking him for a pickpocket. Raju has his own troubles, dealing with his daydreams and the unfriendly people he is working for. He is unable to keep a job and thus faces many problems.

K. K. Singhania a business tycoon buys an expensive hotel “Maharaja International” from P. K. Diwani. Later on, Singhania finds that a Dhaba inside the hotel complex run by a petty guy Raja acts as a hitch to the earnings of the hotel. The hilarity starts henceforth when every ploy used by Singhania to dislodge Raja’s Dhaba ends up in smoke.

Amar and Prem are two daydreamers with a common aim: getting rich by marrying a rich heiress, Raveena Bajaj, daughter of the wealthy Ram Gopal Bajaj. Raveena travels to India with her secretary and friend, Karishma. She is in India to find a suitable groom. The men run into each other on a bus bound for Ooty, where Raveena lives, and soon realize that they have a common goal. The two then fail at various attempts to woo the woman.

Raja Singh a.k.a. Raja Babu (Govinda) is the sole heir to a rich village couple (Kader Khan and Aruna Irani). He is good-hearted but is also spoilt, unsophisticated, and uneducated. Lakhan (Prem Chopra) pretends to be an ally of Raja’s rich father but is secretly embezzling funds. He also creates problems for Raja and his family. Raja regularly visits the village photo studio and gets his picture taken, each time wearing a different outfit. He is always accompanied by his sidekick Nandu (Shakti Kapoor). He falls for Madhubala “Madhu” (Karishma Kapoor) when he sees her photograph in the studio.

No.6 Jaane Bhi Do Yaaro

Professional photographers Vinod Chopra (Naseeruddin Shah) and Sudhir Mishra (Ravi Baswani) open a photo studio in the prestigious Haji Ali area in Bombay and hope to make enough money to keep it running. After a disastrous start, they are given some work by the editor of “Khabardar”, a publication that exposes the scandalous lives of the rich and the famous. They accept it and start working with the editor, Shobha Sen (Bhakti Barve), on a story exposing the dealings between an unscrupulous builder, Tarneja (Pankaj Kapoor), and corrupt Municipal Commissioner D’Mello (Satish Shah). During their investigation, they find out that another builder Ahuja (Om Puri) who is Tarneja’s business rival is also involved in this dealing to get a contract for building 4 flyovers from D’Mello.

Ramprasad Dashrathprasad Sharma (Amol Palekar), a qualified CA, is looking for a job. He and his sister Ratna (Manju Singh) have no relatives or acquaintances except Dr. Kedar (David). Dr. Kedar tells him about Bhavani Shankar’s (Utpal Dutt) firm known as Urmila Traders. Ramprasad is shown to possess many qualities. He is very good at accounting, is fond of sports and music, is a very good singer and also a very good actor (which he uses to get the job at Shankar’s office).

Badrinath Chaturvedi (Manoj Joshi) heads a Brahmin family whose ancestral palace in Rajasthan is believed to be haunted by the ghost of Manjulika, a Bengali classical dancer. Siddharth Narayan Chaturvedi (Shiney Ahuja) and His archeologist wife Avni Chaturvedi (Vidya Balan), the son and daughter-in-law of Badri’s elder brother, return to their native village from the United States and decide to stay in their ancestral palace. This leads to Siddharth’s childhood love interest Radha (Ameesha Patel), who is Badri’s adopted daughter, feeling heartbroken but she immediately recovers. Siddharth is crowned as the king, his right to the throne.

No.9 Padosan (Comedy Movies In India)

Bhola (Sunil Dutt), an innocent young man lives with his maternal uncle (Mama) Kunwar Pratap Singh (Om Prakash). Bhola is enraged at Pratap Singh who has been searching for a girl to marry despite his wife being alive. Angry, he leaves his uncle’s house and moves in to live with his Aunt (Pratap’s wife). There, he finds a beautiful neighbor Bindu (Saira Banu) and falls in love with her. Bindu however, gets annoyed by Bhola and refutes his advances. Vidyapati (Kishore Kumar), who is a singer and theater actor and Bhola’s friend and mentor comes to his rescue and spies on Bindu.

No.10 De Dana Dan (Movies of Comedy In India)

Nitin Bankar (Akshay Kumar) and Ram Mishra (Sunil Shetty) are lucky in love, otherwise, their life is a big zero like their bank balance. Nitin is stuck as a servant and driver of Kuljeet Kaur (Archana Puran Singh), according to the conditions of a loan that his father had taken to educate Nitin. Kuljeet is the owner of many malls, restaurants, and other places in Singapore, where this whole story is based. Nitin is fed up with Kuljeet’s dog, Moolchand Ji, who always puts Nitin into trouble.

1. Which is the no.1comedy movie in India?

Hera Pheri is the no.1comedy movie in India.

2. Which is the best comedy movie in Bollywood?

Padosan is the best comedy movie in Bollywood.

3. Which is the most famous comedy movie in terms of profit?

Hera Pheri is the most famous comedy movie in terms of profit.

4. Which comedy movie is the biggest in terms of series?

Golmaal is a comedy movie that is the biggest in terms of series.