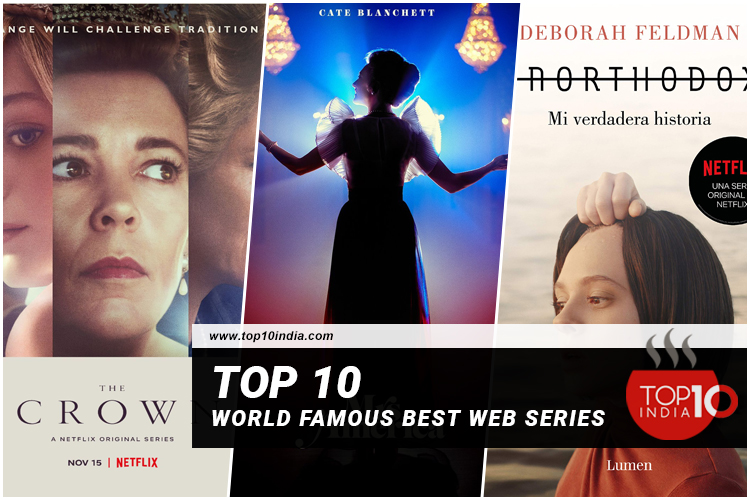 Top 10 World Famous Best Web Series: There is no single person today who has not invested a considerable amount of time watching some web series, and we all know how addicting it can get. But getting quality series that fits our taste is not that easy, especially given the wide range to choose from. So here is a list of web series that viewers across the globe most love. Read on to find something for your next binge-watch session.

The crown is a historical drama that showcases the reign of Queen Elizabeth II. Without any action sequence or a renowned star cast, ‘The crown’ is still one of the most expensive shows of all time, thanks to all the sheer attention put into the details. The show is visually appealing to the eyes, from lighting to cinematography to accurate historical costumes and locations. All these factors come together smoothly as a high-quality binge package. The crown is a must-watch period drama based on true events. This series has not a single fault that can be pointed out. It’s well written and filmed and is sure to take you back in time and is undoubtedly a treat for people who love period dramas.

Mrs. America is a historical drama set in the 1970s. The show very well narrates the women’s rights movement of the 70s and showcases the political infighting during the era. The best part about the series is that it does not shy away from showing the complexities of a real feminist: the inner fear, regrets, conflicting emotions, and thoughts. The cinematography and the brilliant work done by the actors are sure to take you back in time and make you feel all sorts of emotions. Even if you are not a true blue feminist, you will love the series for various reasons like the thrill, the melodrama, and a hint of romance.

Unorthodox is a German American drama Series inspired by Deborah Feldman’s autobiography. This series has received 8 primetime Emmy award nominations. The story is about Etsy, a 19-year-old Jewish woman who, to escape from her unhappy arranged marriage, runs away to Berlin, where her mother lives. But her husband soon follows her after learning that she is pregnant with his child. Etsy’s character is strong and courageous and has a fighting spirit amidst an ocean of apprehension. The story tells a lot about the Jewish community, their tradition, and their beliefs, which not many people are aware of. The character of  Etsy is so well portrayed that it is impossible not to feel the emotions emoted by the character and has received a lot of love from the audience for the same.

The Queen’s Gambit is an American coming of age period drama based on a novel of the same name. As the name suggests, the series is about an orphan chess prodigy and her unlikely journey to stardom while grappling with drug and alcohol addiction. The main reason to watch this series is it is one of a kind storyline because, let’s be honest, how often we get a series based on a game like chess. The series all together received a positive response even from the chess community. Anya Taylor has done a fantastic job portraying the character with her brilliant acting, and the whole storyline itself is very satisfying with its realistic approach. This story is sure keeps you engaged with the perfect amount of drama and a compelling storyline.

Fleabag is a British tragicomedy series about a free-spirited young woman in London who tries to navigate her life and love while trying to cope with a tragedy. The story focuses on how amidst all the anger and grief, she tries to heal without taking any help offered to her and keeping her bravado through it all. The show is definitely addicting with the perfect amount of dark humor with some remarkably memorable and hilarious scenes. If you want some refreshing content apart from the regular drama, then Fleabag is definitely the one for you. The whole series unfolds beautifully and will surely surprise you with the twists and turns.

Anne With an E is a Netflix series about an orphan girl named Anne. The whole story has very well addressed a range of issues such as racism, gender inequality, freedom of speech, psychological trauma, child abandonment, etc. The character of Anne is bright, high-spirited, and imaginative. Anne is always bullied in her orphanage, and once she gets adopted, the bullying continues to her new school, but with her unique character and traits, she transforms the lives of people around her.

Dark is a German sci-fi thriller and the story of four families in a small town in Germany that uncovers a series of mysteries that spans four generations. The show has many interesting and indulging factors for sci-fi lovers, like time traveling through a wormhole. Everything starts when a child goes missing, and the families set on for a frantic hunt for answers. The series will definitely keep you hooked throughout with the catchy and not-so-common storyline.

Georgia is a free-spirited woman who, along with her two kids, Ginny and Austin, moves to the north to search for a fresh start and give a better life to her children. Ginny, a 15-year-old, is portrayed as being more mature than her 30-year-old mother. As the name suggests, the show revolves around the mother-daughter duo. It is definitely a feel-good kind of series that includes everything from romance to drama to some serious life lessons.

The Haunting of Bly Manor is a gothic romance series that kick starts with a young American woman who arrives at Bly as a governess for two kids. Danielle Clayton is totally unaware that the manor is haunted, and you sure are in for an adrenaline rush when she starts seeing the ghost of Peter Quint. The series has a perfect touch of spookiness and romance, and both combined are definitely something you will enjoy watching.

Little Fires Everywhere is an American series adapted based on the book with the same name. The story centrally revolves around the Richardsons, Mia – a single mother and her daughter Pearl. There is something that Mia is hiding from Pearl, but what is it? You can expect many unexpected twists in the story, and it also brings in nostalgic emotions.

Viewers across the globe approve all the above-mentioned series. All genres are covered here, so everyone gets something according to their taste. I hope your choice-making task has been sorted a bit with this list and you enjoy your next binge-watch session.

Published in A to Z, Country and Entertainment