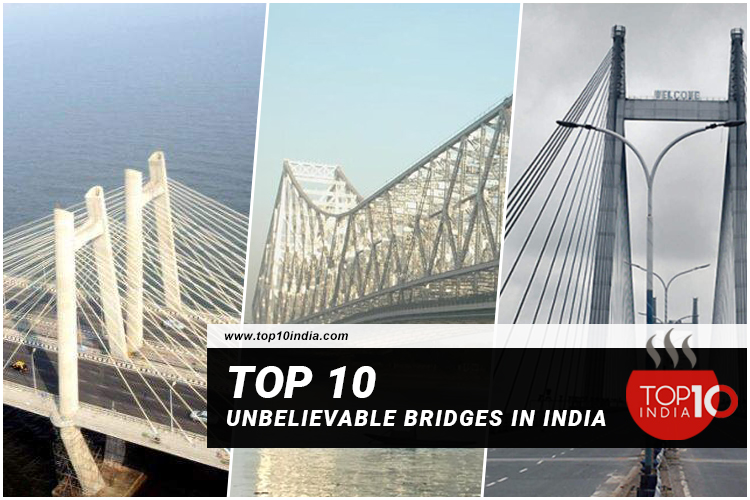 Top 10 Unbelievable Bridges In India: Bandra Worli Sea Link, Mumbai is the number 1 bridge in India that is basically a cable-stayed bridge supported with cables. A bridge is a metal or concrete construction that connects two points, such as roadways or trains. Bridges have aided in the transformation of people’s lives, as simple as it may appear. They’ve given people access to the outside world, made life easier for them, and literally and metaphorically opened doors for them.

India now has a large number of bridges. Bridges have been built across rivers, high altitude zones, and even mountains, wherever it appears impossible. Some of these bridges are stunning and considered engineering masterpieces. Here is the list of the Top 10 Unbelievable Bridges In India.

The most unbelievable bridge in India, the Howrah bridge, comes to mind when one thinks of Kolkata. Kolkata’s most iconic landmark is the Howrah Bridge. This renowned bridge in India, which spans the Hooghly River, was built in 1943. It is a cantilever bridge that hangs over the river and is only supported at the ends.

Vidyasagar Setu, popularly known as the Second Hooghly Bridge, is another famous bridge in India that spans the Hooghly River and is located in Kolkata. The bridge was dedicated to the public in 1992 and is named after Pandit Ishwar Chandra Vidyasagar, an educational reformer.

The Mahatma Gandhi Setu, among the top 10 unbelievable bridges in India, spans the Ganges and is one of India’s longest river bridges. The bridge, which connects Patna, the state capital, to Hajipur, was completed in 1982. Gammon India Limited built the 5.75-kilometer bridge, which took ten years to build.

In 1914, the Pamban Bridge in Tamil Nadu became India’s first sea bridge. Until 1988, when a road bridge was built, it was the only link between Rameshwaram and the mainland. The middle section of the Pamban Railway bridge that opens up and allows ships to sail through was designed by German engineer Scherzer.

A popular bridge in India, Coronation Bridge, located in Siliguri, West Bengal’s Darjeeling district, is a picturesque bridge surrounded by lush green forests. The Teesta River bridge is named after the coronation of King George VI and Queen Elizabeth to the throne.

Golden Bridge is a well-known British-era bridge in Gujarat among the top 10 unbelievable bridges in India. It is built across the Narmada River and links Ankleshwar and Bharuch. The British Raj erected the bridge in 1881 to maintain a smooth trade flow and access to the officials in Mumbai’s port city.

Godavari Arch Bridge, which opened in 1997, is an engineering wonder. The bridge, which is made of prestressed concrete, is Asia’s longest arch bridge. It is located in the city of Rajahmundry and spans the Godavari River. The bridge is a railroad bridge with a total length of 320 feet. It was built to endure cyclonic storms because it is located in a cyclonic area.

The Jadukata bridge, which spans the Kynshi River, is a marvel of engineering. It’s in Ranikor, in the West Khasi Hills, and it’s surrounded by lush greenery. It’s a cantilever bridge with only the ends attached. This is, without a doubt, one of India’s most gorgeous bridges. The Jadukata Bridge, erected across the Jadukata River in Meghalaya’s West Khasi Hills District, is the country’s longest span cantilever bridge.

Dhola-Sadiya Bridge is India’s longest river bridge, stretching over 9 kilometers across the Lohit River. It connects the states of Arunachal Pradesh and Assam. In 2017, the bridge was built and opened to the public. The bridge is critical because it will cut the time it takes to travel between the two states from six to one hour.

1. Which is the beautiful bridge in India?

Bandra Worli Sea Link, Mumbai is the most beautiful bridge in India.

4. Is there any draw bridge in India?

Pamban Bridge, Tamil Nadu is the draw bridge in India.

Published in A to Z, Infrastructure and Tech