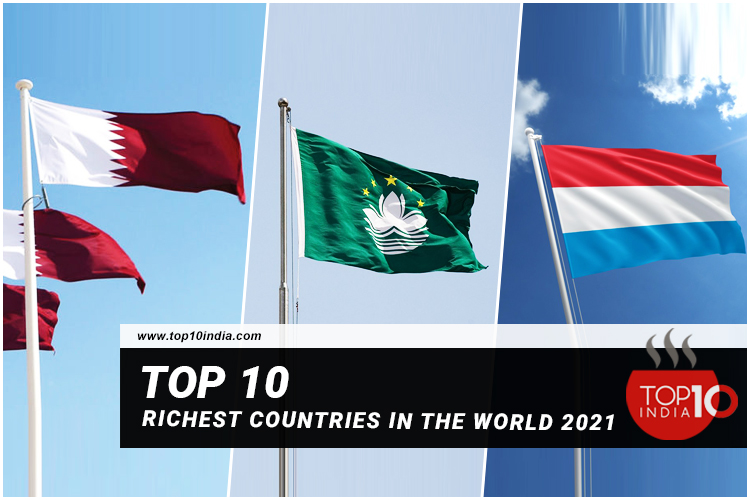 Qatar is the sovereign country in western Asia. The population of this country is about 2.6 million. Life expectancy at birth in this country is 78.3 years. It is among the richest countries in the world. Qatar is a high-income economy and is a developed country. This country has the highest per capita income in the world. The unemployment rate of the country is 0.2%. This country has the world’s third-largest gas reserves and oil reserves. Qatar is a powerful country in the Arab world. This country will host the FIFA World Cup 2022, becoming the first Arab country in the world to do so. France and other western countries train Qatari special forces. GDP of the country is about $166.031`billion, making it 1st on our list. Tourist places to visit Qatar are the Museum of Islamic Art, Doha Corniche, The Pearl Qatar, Souq, and many more.

It is located on the southern coast of China. It was established in 1557. It has a large amount of autonomy with its own passport, currency, and constitution. This country has little land and few natural resources, and it totally depends on mainland China for most of its basic needs like food, water, and energy import. Suppliers of raw materials and capital goods of this country are Hongkong and Japan. It has 41 casinos that belong to Wynn resorts and sands. It is the only part of the world where gambling is considered legal. The GDP of the country is 39.449 billion dollars, making it 2nd on our list. Macao has a rapid development in its manufacturing sector in 1970. Tourist places offered by the country are The Venetian Macao, Senado Square, A-Ma Temple, and many more.

Luxembourg is one of the smallest European countries, surrounded by France and Germany. It is famous for its medieval old town. It is a developed country with a progressive economy and one of the world’s highest GDP per capita. The country is a member of the European Union (EU), NATO, United Nations (UN). The Security Council of the country consists of fifteen members, of which five are considered permanent. The citizens of the country can travel to 187 countries and territories without visas. It is famous for the Moselle river valley in the southeast city. It is considered one of the most beautiful and richest countries in the world.

It is an island country at the southern end of the Malay peninsula. Its population is 5.70 million. The national language of Singapore is Malay. The country is also known as “Garden City” or a “City in a Garden.” It has one of the highest living standards in the world. It offers good education, healthcare, housing. This country is known for its strict rules and punishments, including heavy fines. It is among the safest countries in the world. This country is the founding member of ASEAN. Its constitution has representative democracy as its political system. The legal system of Singapore is based on English Common Law. It is ranked as one of the most beautiful and least corrupt countries across the world. GDP of the country is $379.071 billion making it 4th on the list. Travel places offered by the country are Marina Bay Sands, Botanic Garden, Zoo, Orchard Road, and many more.

Ireland is an island situated in North Atlantic. From the past few decades, Ireland has gone from one of the poorest nations to one of the wealthiest nations in the world; this is all due to the export-oriented economic model and success in attracting FDI, particularly from large multinationals. It is among the fastest-growing economies, with a 7.2% annual increase in GDP. The country offers a skilled English-speaking workforce, a suitable business environment, and a favorable tax regime. Ireland’s top exports are chemicals like packaged medicaments. The country’s GDP is over $320 billion making it 5th on our list—tourist places to visit in Haifa, Nazareth, Jaffa, The Dead Sea, and many more.

Brunei is a small country on the island of Borneo, which Malaysia and South China surround. This country is known for its biodiverse rainforest and beaches. This country gained its independence from the United Kingdom on 1 January 1984. Economic growth during the 1990s and 2000s with an increase of 56% in GDP helped transform Brunei into an industrialized country. This country has the second-highest Human Development Index. This country does the production of crude oil and natural gases. It has the highest unemployment rate among the 10 richest countries at 9.2%. Worldwide, the unemployment rate is less than 5%. This country is also considered the most beautiful and richest country in the world.

Norway is a country in the north of Europe. The mainland of this country is surrounded by the Atlantic Ocean and the North Sea. The monarchy of this country is independent since 1814. The population of Norway is 5 million approximately. The capital of this country is Oslo. The national language of this country is Norwegian. The constitution of this country was written and signed on 17th May 1814. This country tried to stay neutral in world war 2 but was occupied by German forces from 9th April 1940 to 8th May 1945. In 1952 Norway became a member of “NATO.”  Exports of the country include natural gas, oil, hydroelectric power, fish, and minerals. GDP of Norway is $366 billion making it on 7th rank in our list. Places offered by the country for tourists are Sognefjord, Pulpit Rock, Tromso, Lofoten Island, and many more.

UAE is a country situated in the Eastern End of the Arabian Peninsula, surrounded by Oman and Saudi Arabia. The UAE is an elective monarchy formed by a Federation of 7 Emirates; nearly half of the exports from UAE are in the form of petroleum- refined, crude, and gas. The country is recognized as a middle power and regional. The UAE is a member of the United Nations (UN) and Gulf Corporation Council. Country exports also include precious metals and minerals like diamond and gold. Arabic is the official language of the country. It is one of the wealthiest countries in the world, with a GNI per capita of $67,758. It is one of the highest rates of primary school enrolment and setting up students for future success. UAE has the least unemployment rate in the world at 2.6%. Tourist places offered by the country are Burj Khalifa, The Dubai Mall, Ferrari World Abu Dhabi, Emirates Palace, and many more.

It is a country in Western Asia, bordering Iraq to the North and Saudi Arabia to the south. Kuwait is having a population of 4.5 million people. It is one of five nations with a GNI per capita above $70,000. It is considered one of the wealthiest countries in the world. It is an Emirate with an autocratic political system. Petroleum is the main source of exports accounting for more than 84%.  Kuwait has more than a 4.1 million population. Arabic is the official language used in the country, and the official religion is Islam. Tourist places offered by the country are Kuwait Towers, Grand Mosque of Kuwait, Liberation Tower, and many more.

Switzerland is a mountainous European country surrounded by Italy, France, and Germany. It is one of the richest countries in the world. The population of the country is more than 8.5 million. Gold makes up the largest share of exports for the country. Being a relatively small country, it is one of the countries holding a large share of the World’s gold. Life expectancy at birth in the country is 83.6 years. It has weathered the situation of covid-19 very well; this was all due to the help of laxer restrictions. This country is famous for cows, cash, cheese, clocks, and chocolates, followed by meadows, mountains, Heidi, and Edelweiss. The relatively small country has the oldest policy of military neutrality in the world and four national languages.

Top 10 Richest countries of world list are being prepared by consolidating the GDP, popularity and the famous places to travel by the country. This will help you gain knowledge about Top 10 Richest Countries in the World 2021

Published in A to Z, Country and General knowledge