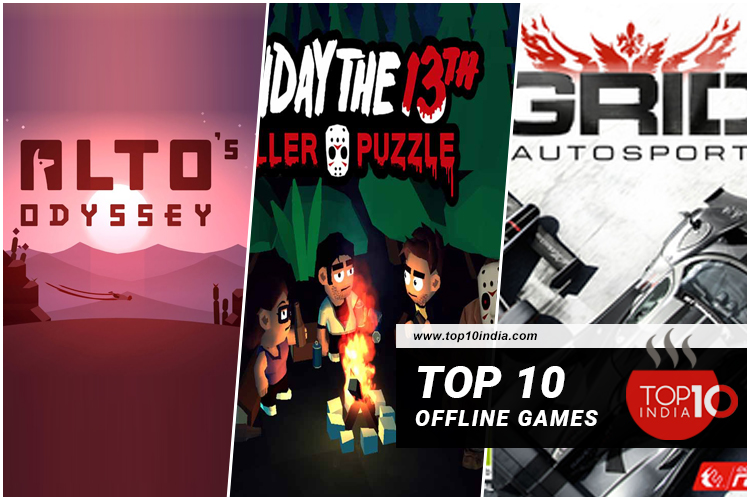 Top 10 offline games:- Offline games have been such a rave in the past few years that they have quickly surpassed even gaming consoles concerning popularity. The continuous development of the smartphone sphere has made it possible for top game developers to hit google play with their best lot. But there is one drawback with the play store: most of the game requires an internet connection to play it, but here, we are providing Top 10 offline games.

Here is the list of Top 10 offline games. This list presents the best games which can be played without any internet connection. Internet connection for games often affects the gaming experience and limits players in a country like India, where consistently finding an internet connection can be a task on its own. So, that’s why we have prepared this list.

Alto’s Odyssey is an endless runner and a sandboarding video game developed by Team Alto and published by Snowman. It was released in 2018 for iOS and Android. It is a side-scrolling infinite running game that requires no internet connectivity. You can slide down various slopes throughout the game while collecting coins. The highlight of the game is its simplistic, enjoyable gameplay and great colorful graphics.

No.2 Friday the 13th: Killer Puzzle

Friday the 13th: Killer Puzzle is a horror puzzle game for iOS, Android, Steam, and Nintendo Switch developed by Blue Wizard Digital. It is released on January 20, 2018, in the USA and April 13, 2018, worldwide. It is the fourth official video game based on Friday the 13th: Killer puzzle. The game won the iOS App of the week on January 26, 2018. In this game, the player control Jason Voorhees by sliding him around an isometric puzzle to attack victims directly or indirectly, in “Kill Scenes.”

Grid Autosport is a racing video game developed by Codemasters. It is the ninth game in the TOCA series. A racing game from the popular GRID series, GRID Autosport takes you racing on the tracks. With full controller support, lots of content, and many races, players can be entertained for hours. The game is based on the PS3/Xbox 360 title of the same name, so you get great graphics and good gameplay.

Temple Run is a 3D endless running video game developed and published by Imangi Studios. The player controls an explorer who has obtained an ancient relic and runs from a demonic monkey-like creature chasing him. The game was initially released for iOS devices on August 4, 2011, and later ported to the Android and Windows Phone 8. The game was a commercial success with positive reviews from critics.

Subway Surfers is an endless runner mobile game co-developed by Kiloo and SYBO Games, private companies based in Denmark. It is available on Android, iOS, Kindle, and Windows Phone platforms and uses the Unity Game Engine. Subway Surfers was released on 24 May 2012 with updates based on seasonal holidays. In 2017, It was the most downloaded game across the globe. The game starts by tapping the touchscreen while jake or any other character spray graffiti on a subway and then gets caught in the act by the inspector and his dog, who starts chasing the character.

Minecraft is a sandbox video game developed by Mojang. In Minecraft, players explore a blocky, procedurally generated 3D world with virtually infinite terrain and may discover and extract raw materials, craft tools, and items and build structures or earthworks. Despite its lack of plot and minimal graphics, Minecraft continues to be a trendy title across platforms for its endless possibilities. Players can build their own worlds and play in them without requiring a connection. There are also extra skins that can be purchased.

No.7 The Room Series

The Room is a puzzle video game developed by Fireproof Games. The Room series of puzzle games feature puzzles that force you to brainstorm along with graphics that look great. Each of the games puts you in a room that you must escape by solving the corresponding puzzles. The simple concept means you don’t deal with any ads or in-app purchases. While the game is offline, you will need to be connected if you want to use the auto-save feature, so keep that in mind.

Ravensword Shadowlands is a role-playing game created by American indie studio crescent moon games. It is the successor of Ravensword: The fallen king. Ravensword is a part of a hit RPG game franchise that was created for the android platform. Ravensword takes a player to the kingdom of Tires, where there are massive maps to explore freely. It has an enormous 3D RPG world to explore. It reflex and precision-based combat with manual blocking and dodging.

Ark: Survival Evolved is a 2017 action-adventure survival video game developed by studio wildcard, in collaboration with instinct games, Efecto Studios, and Virtual Basement. Ark: survival evolved is an exceptional survival experience that features a vast open world, which players can easily explore and enjoy. In Ark: Survival Evolved, a player needs to explore the islands with nothing, not even clothes. The player needs to explore the islands, consisting of several biomes, and gather resources to craft gear and build shelters. But beware of the dinosaurs that roam around. Or name them to be your pets.

Published in A to Z and Gadgets