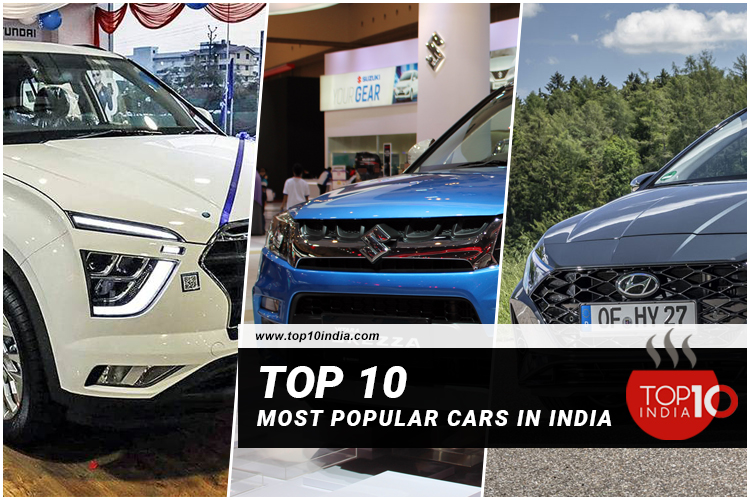 Top 10 Most Popular Cars In India: Since the last decade, cars have gained a lot of popularity in India. New cars are being developed and launched frequently. The technology used in cars has also changed drastically. Also, consumers are becoming more and more aware of the feature and specifications of their vehicles.

TOP 10 MOST POPULAR CARS IN INDIA

Although the customers have a wide choice of vehicles from different manufacturers, there are some cars that are more loved than others. Some of these cars have been around for quite some time now while others have entered the market recently. These cars provide excellent value for money and are decently equipped according to their price. In addition to this, all these cars comply with the latest Bharat Stage 6 (BS6) norms given by the government. So, let’s dive into our list of some of the bestselling and most popular cars in India based on their total sales.

Hyundai is a South Korean car manufacturer that entered the Indian market in May 1996. Since then, it has grown to become one of the most popular car manufacturers in India. The Creta was first showcased as a concept vehicle in the 2014 Beijing Auto show. It came to India in its production-ready form in the year 2015. It is a five-seater subcompact crossover SUV based on the Hyundai-Kia PB platform. The current and the latest generation Creta was introduced in March 2020. It comes with the option of one diesel and two petrol engines. One of the petrol options is turbocharged while the other is naturally aspirated. It is one of the most famous cars in India 2021.

Maruti Suzuki has been selling affordable and quality cars in India since the year 1981. The Vitaria Brezza is one of the most popular cars in india 2021. The Vitaria Brezza is a subcompact SUV that came into production in the year 2016. At that time it was powered by a turbocharged diesel engine mated to a 5 speed automatic or manual transmission. After 2020, this engine was replaced with a petrol engine which came with a 5-speed manual or a 4-speed automatic gearbox.

It has also received 4 stars in Global NCAP safety tests.

Once again we have Hyundai in our list of most popular cars in india 2021. The i20 is one of the best-looking hatchbacks on sale in India right now. The i20 was launched in many markets replacing the Getz. It was launched in the year 2008. This car uses a platform that is completely new and is most popular in Europe and India. The third and current generation was set to launch in 2020 but was delayed due to the pandemic. It reached the Indian shores in the first quarter of 2021 and is currently on sale with three petrol and one diesel engine option. There is also a wide range of trim levels to choose from.

On the fourth spot on our list once again we have a car from the house of Maruti Suzuki. It is one of the most popular cars in India since its launch. The Baleno badge has been used by the company since 1995 for many different cars. These cars were affordable sedans which were very popular back in the day. The current generation Baleno is a hatchback. It was introduced in the year 2015 and has gained a lot of popularity since then. It was given a facelift in 2019 and came with some significant cosmetic updates.

Maruti Suzuki was formed when Maruti Udyog Ltd. And the Japanese carmaker Suzuki joined hands in 1981. They have since made many popular and affordable cars for the Indian market. The Dzire is a compact four-door sedan that came into production in the year 2008. It was the sedan version of the more popular Swift hatchback. It is a sub-4-meter car to avail benefits given to cars under 4 meters of length. The current and the third generation Dzire chassis is based on the HEARTECT platform. The car comes with the option of a manual or an automatic gearbox. It is arguably the most famous cars in India 2021.

The most popular car in India is probably the Maruti Suzuki Swift. This car gave birth to the much-loved Swift Dzire. The global version of the first generation Swift was first shown to the world in Paris Motor Show 2004. It also received 4 stars safety rating in Global NCAP tests. Since its launch in India, it has been the most popular subcompact hatchback car. It also received many cosmetic and mechanical upgrades over the years. This car is also popular in motorsports like rallying and circuit racing.

Hyundai has made some of the most popular and compact cars in India for a long time. The most popular car in india list is incomplete without this car. The Grand i10 is a more premium version of the small and affordable i10 which is the smaller brother to i20. The overall quality and durability of the car have increased drastically. For someone looking for a small and easy-to-use car, this is a perfect choice. After-sales service and maintenance are also very cheap and good.

Tata is one of the most recognized and famous car manufacturers all over the world.

They currently own Land Rover and Jaguar which are British manufacturers. They make some of the best private and public vehicles in India. The Tiago was a replacement of the Tata Bolt which was based on the much older Tata Indicia Vista. It came into production in the year 2016. It is a popular sub-4-meter compact hatchback made by an Indian manufacturer. The Tata Tigor which was launched later is a compact sedan based on the Tiago.

The Celerio is another popular compact hatchback made by Maruti Suzuki which came into production in 2014. It was the first car in Pakistan that came with an automatic gearbox.

The earlier model came with a petrol engine and the diesel variant was introduced later in 2015. It came with an automatic as well as a manual gearbox. It is one of the cheapest and smallest that you can buy in India. The Celerio was marketed as a car that eliminated the manual gearbox and promised ease of use.

Maruti Suzuki launched the first Indian car in the form of the Maruti 800. It was an instant hit and was the most affordable car in India for a long time. The Alto was sold much later and was a replacement for the much-loved 800. But, the manufacturer decided to resurrect the 800 badges in the form of the Alto 800. It was launched in October 2012 and mixed the Alto and the 800 badges. It is one of the smallest cars on sale in India right now. It is known for its ease of use and maintenance. It is a perfect beginner car.

The Maruti Suzuki 800 is the most popular car manufactured in India. Its latest avatar is the Alto 800.

The Maruti Suzuki Swift is currently the No. 1 car in India. It is also one of the best-selling cars in India currently.

The best car in India is the Hyundai i20. With its latest features and premium quality, it is one of the best cars in India.

The Maruti Suzuki Dzire is the best car to buy in India due to its value for money and huge boot space.

Published in A to Z, Automobile and Brands