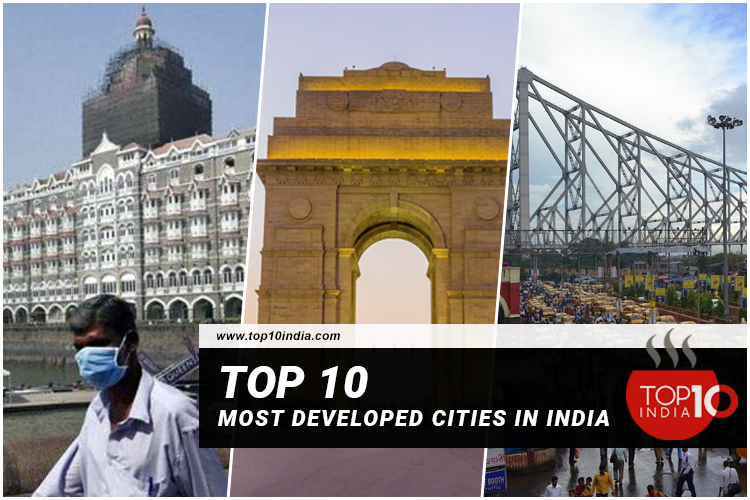 Top 10 Most Developed Cities in India

Top 10 Most Developed Cities In India: Mumbai has a GDP of 310 billion US Dollars, the most developed city in India. India is still a developing nation but is considered one of the emerging superpowers in the world. People are constantly working and exceeding their limits to make their country the best in the world. The development of a particular region is dependent on many external as well as internal factors. But some cities in India show rapid growth in all the aspects that define a developed city.

Top 10 Most Developed Cities In India

These cities have rapidly developed infrastructure and have shown development in other social and economic aspects. We have created a list based on the net GDP that each city contributes. Gross Domestic Product is a measure of complete business sector estimation of every single goods and service produced to be delivered in a nation-state or city inside of a given time frame. Let’s dive into our list. Here is the list of the Top 10 Most Developed Cities In India.

Mumbai is the capital of Maharashtra. It is an important city in Indian History as well. Mumbai is the home of all major industries across India. It is located along the Arabian Sea and also has an international airport. It is also the home of Bollywood. It has all the major hotel chains and is a trendy tourist spot. It is also famous as the financial capital of India. It is known to be one of the most developed cities in India.

GDP:
• It is estimated that Mumbai has a downright GDP of $310 billion.
Attractions:
• Gateway of India.
• The Arabian Sea and Elephanta Caves.
• Lal Baug Ganpati temple.
Major Industries:
• Bollywood and its sub-industries.
• Maritime transport and trade.

The capital city of India, New Delhi, lands second on our list of most developed cities in India. It is home to the Indian Parliament and also has many prime official buildings. Estimates show that New Delhi generates a GDP of $293.6 billion. The city also has an international airport. The development has led to the overall development of the NCR region. It is also a famous tourist destination and is visited by tourists all time of the year.

GDP
• The GDP of New Delhi is $293.6 billion.
Attractions:
• India gate and Qutub Minar are the most popular tourist spots.
• The Indian Parliament.
• Various local markets that sell exclusive goods.
Major Industries:
• New Delhi is home to various government buildings.
• It is also rising as an information or data technology hub.
• Various media outlets are based out of New Delhi.

Kolkata is rapidly emerging as the most advanced city in India. It was also India’s capital before independence. It is undoubtedly among the best cities to live in. Kolkata has a rich cultural heritage and is famous for its cuisine and traditions. It is also the capital city of West Bengal and the biggest city in the whole state. It is also claimed to be one of the safest cities in India.

GDP:
• Kolkata has a GDP of $150.1 billion.
Attractions:
• Visited by many people of its rich and diverse cuisine.
• Known as “The Cultural Capital of India.”
• It also has various temples and museums.
Major Industries:
• This city has numerous hotels as it is a major tourist destination.
• The city is also home to steel and heavy engineering machinery production.
• It is India’s centre for jute processing.

The capital city of Karnataka that is Bangalore, is also India’s information technologies hub. The city is quite famous for its parks and gardens. This is also one of the best cities to live in India. The youth prefers living in this city as it has job opportunities and has good nightlife. It is one of the most advanced cities in India for a long time.

GDP:
• The city of Bangalore contributes $110 billion to the GDP.
Attractions:
• The ISKCON temple in Bangalore is visited by many devotees and is a must-visit spot.
• The city is filled with beautiful gardens and parks.
• Ooty and Mysore are the two popular spots that Bangalore connects.
Major Industries:
• The city is popular as the IT hub of India.
• Some of the best educational institutes in India are located here.
• The city is also the birthplace of various startups.

Chennai is also the capital city of the state of Tamil Nadu and one of the most developed cities in India. It is also one of the oldest and biggest cities in southern India. Until the year 1996, Chennai was known as Madras. It has a lot of historical importance as it was a port city. Most of the automobile manufacturers are situated in Chennai.

GDP:
• Chennai contributes around $78.6 billion to the GDP.
Attractions:
• Chennai is home to various beautiful beaches like Marina Beach.
• Chennai has various bars and pubs too.
• various temples can be visited here.
Major Industries:
• Most of the major automobile manufacturers are based in Chennai.
• It also has major healthcare centers providing good facilities.
• The Chennai Port and Ennore Port are of importance in trade.

Hyderabad is known as the ‘City of Nawabs.’ Hyderabad was earlier the capital city of Andra Pradesh. The city is known as a popular IT hub. The city is divided into two major parts that are the old city and the new city. The old city is filled with the nostalgia of the Mughals and nawabs, and the new city is growing rapidly to become the major IT hubs in central India.

GDP:
• Hyderabad has a downright GDP of $75.2 billion.
Attractions:
• The city has a rich cultural heritage and is famous for its biryanis and Mughal cuisine.
• The Fort of Golconda is also a popular tourist destination.
• The beautiful Charminar is also a major attraction in this city.
Major Industries:
• Hyderabad is rapidly emerging as a major IT hub in India.
• The city is filled with various restaurants and hotels that specialize in local cuisine.
• Tourism is one of the major industries in this city.

Pune is the second biggest city in Maharashtra and one of the most developed cities in India. It is also home to various companies. Pune is situated around 100 km away from the city of Mumbai. It makes it a hotspot for various industries and companies. Its development has gained a lot of pace in recent years. This city also has an air force base and cantonment.

GDP:
• Pune has a downright GDP of $69 billion.
Attractions:
• The Shanivar Vada and the Raigad Fort are a famous part of the Maratha Empire that tourists visit.
• Lonavala is a hill station situated near Pune and is a famous tourist destination.
• Mahabaleshwar hill station is also situated near Pune.
Major Industries:
• Pune is a major educational hub in the country.
• Major automobile manufacturers are also located in Pune.
• It is also a major IT hub in Maharashtra.

The most developed City of India list is incomplete without Ahmedabad, which is situated in Gujarat. It is also one of the fastest-growing cities in India. Ahmedabad is home to various businesses. It is the largest and the most populated city in the state of Gujarat. It is also claimed as the safest city to live in India. The city also ranks as one of the cleanest cities in India.

GDP:
• Ahmedabad is estimated to have a GDP of around $68 billion.
Attractions:
• The Sabarmati Ashram is a frequent tourist spot in Ahmedabad.
• The Adalaj stepwell is also a famous tourist spot.
• There are various beautiful lakes in and around Ahmedabad.
Major Industries:
• Ahmedabad is home to the diamond-cutting industry.
• The cotton and textile industry is also very famous.
• Various pharmaceuticals companies are also based here.

No 9. Surat (Top 10 Most Developed Cities in India)

Surat is also one of the most advanced cities in India and one of the biggest in Gujarat. It also has an extensive coastline. Like other cities in Gujarat, it also has diamond-cutting industries and various other small and large-scale businesses.

GDP:
• Surat contributes about $59.8 billion.
Attractions:
• The beaches of Surat are frequented by visitors.
• The Dutch garden is also a major tourist attraction.
• The Dumas beach is the only haunted beach in India situated in Surat.
Major Industries:
• There are various diamond-cutting industries here.
• Surat is also well known for its silk and textile.
• Handicrafts from Surat are also very popular.

No 10. Visakhapatnam (Top 10 Most Developed Cities in India)

One of The most developed cities of India, Vishakhapatnam, has its own importance as it has some of the biggest ports in India. This has been the boosting factor for the GDP.

GDP:
• Visakhapatnam has a GDP of around $48.5 billion.
Attractions:
• The Kursura submarine museum.
• This city also has various beaches.
Major Industries:
• This city is a major trade center and has an international port.
• The city is also a major steel manufacturer.

1. Which is the richest city in India?

Mumbai is claimed to be the richest city in India.

2. Which are the top 10 richest states in India?

Bangalore is the best city to live in in India 2021.

4. Which city has the highest GDP in India?

Published in A to Z, Business, Destination and Economy