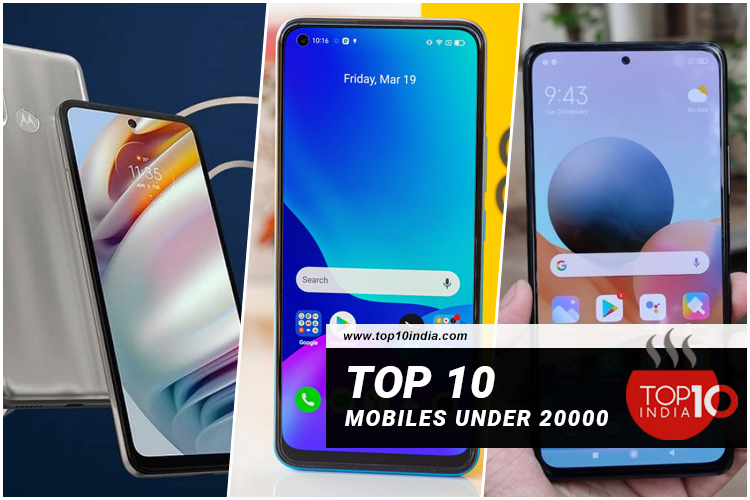 Top 10 Mobiles Under 20000 | Affordable Mobile Phones List: In the world of smartphones, we’ve reached a point where it’s no longer necessary to spend absurd amounts of money to get some pretty cool features in phones. Even in the mainstream segment, one can find some good deals if one knows where to look. If you have a budget of around Rs. 20,000, then you can find a pretty diverse set of good smartphones on offer. It was just last year that the in-display fingerprint sensor became all the rage in flagship phones, and today, you can actually get that in a phone under Rs. 20,000.

In this article, we are going to discuss the top 10 mobiles under 20000 ranges. These mobiles which we are classifying are the best top mobiles in the 20000 range. We will classify these mobiles based on their battery backup, camera quality, processor, ram, and many more details. Motorola Moto G60 is ranked in the first position in the list of top 10 mobiles under 20000.

The Moto G60 s the first Motorola smartphone with a 108-megapixel camera and is priced quite aggressively. The Moto G60 is a big and bulky phone measuring 9.8mm in thickness and weights 225g. This makes single-handed use a little tough. It has a big 6.8-inch LCD with a 120Hz refresh rate. It has a hole punch at the top that houses the 32-megapixel selfie camera. Moto G60 is powered by the tried and tested Qualcomm Snapdragon 732G processor and delivers good performance. It has only one variant in India, offering 6GB of RAM and 128GB of storage. Storage is further expandable using the hybrid SIM slot.

Realme 8 Pro is the successor to the Realme 7 Pro and gets a bold design. It is slimmer than its predecessor and comes in flashy colours. The main change on the Realme 8 Pro is the quad-camera setup at the back, which houses a 108-megapixel primary camera. The phone is light and easy to hold. It sports a 6.4-inch AMOLED display with a hole punch for the selfie camera in the top left corner. The display has full-HD+ resolution and an in-display fingerprint scanner. It is also powered by the Qualcomm Snapdragon 720G processor, with 6GB or 8GB of LPDDR4X RAM and 128GB of UFS 2.1 storage. You get a 4,500mAh battery that is capable of fast charging at 50W.

Xiaomi is raising the profile of its mainstream Redmi Note series with specifications that are sure to grab attention. The Redmi Note 10 Pro Max has a 108-megapixel camera but is otherwise identical to the Redmi Note 10 Pro, and the price difference between the two might not be worth it. This phone has a fantastic 6.67-inch full-HD+ 120Hz HDR10 Super AMOLED display with an embedded front camera. It’s bright, crisp, and vibrant. You get a Qualcomm Snapdragon 732G SoC and up to 8GB of RAM with 128GB of storage. There’s a 5020mAh battery, and you get a 33W charger in the box.

The Realme Narzo 30 Pro 5G is currently the least expensive 5G phone in India, with a starting price of Rs. 16,999. The all-plastic body has held up well so far, ergonomics are good, and it doesn’t feel cumbersome even though it weighs about 194g. The side-mounted fingerprint sensor works very well. All that’s needed is a quick tap to unlock the phone. The display is a 6.5-inch full-HD+ LCD panel with good levels of brightness and colour saturation. The Realme Narzo 30 Pro 5G runs on the MediaTek Dimensity 800U SoC, a built-in 5G modem and is quite powerful and power-efficient.

No.5 Infinix Zero 8i

The Infinix Zero 8i is a tall smartphone with a  big 6.85-inch display with a 90Hz refresh rate. It has got a dual selfie camera setup embedded in the top left corner. The Zero 8i isn’t thick, and the curved sides make it comfortable to hold. Infinix has put the fingerprint scanner on the power button, slowly becoming the norm these days, even for budget smartphones. II found the Infinix Zero 8i to be a little too heavy, tipping the scales at 210g. It packs in a 4,500mAh battery and 33W fast charging but ships with an 18W charger in the box.

The Vivo v20 se is a tall smartphone with a big 6.44-inch display. It has got a dual selfie camera setup embedded in the top left corner. It has a processor of Qualcomm Snapdragon 665. The phone’s RAM is 8GB external;l and has an internal memory of 128 GB. The battery capacity of this phone is too good. It has a battery of 4100mAH.  The Vivo V20 SE runs Android 10 and is powered by a 4100mAh removable battery. The Vivo V20 SE supports proprietary fast charging.

The Realme X7 5G comes in at an attractive price and boasts of the brand new MediaTek Dimensity 800U processor, plus 5G (dual-SIM, dual-standby) and an eye-catching design. The back and giant brand slogan pattern might not be to everyone’s taste, but that’s only on the ‘Nebula” version, and there’s also a sober ‘Space Silver’ option. The Realme X7 has a 6.4-inch AMOLED screen with an in-display fingerprint sensor. It’s relatively light and compact but still has a 4,310mAh battery and delivered excellent runtime during our review. You can use the bundled proprietary 65W fast charger, but this phone actually charges up to 50W.

It features a mirror-split design, which creates some interesting patterns when light hits it. The Realme 7 is thicker (9.4mm) and heavier (196.5g) than the 6 due to its larger battery, which is very noticeable in daily usage. The Realme 7 is the first phone to debut with the MediaTek Helio G95 SoC. This is an updated version of the Helio G90T, seen in the Realme 6, but it’s not a major upgrade. Performance is pretty satisfactory. The Realme 7 uses Realme UI, based on Android 10, which worked smoothly. Face recognition and the side-mounted fingerprint sensor are also quick.

The Realme 7 Pro features the same mirror-split design on its back as the Realme 7, but it’s a lot slimmer (8.7mm) and lighter (182g), even compared to the Realme 6 Pro. Sadly, this phone ditches one big feature from the Realme 6 Pro, and that’s a high screen refresh rate. The Realme 7 Pro performed well as it features the same Qualcomm Snapdragon 720G SoC as the 6 Pro. Realme UI ran pretty smoothly without missing a beat. The Super AMOLED display was great for watching videos on, and the stereo speakers enhanced this experience.

The Samsung Galaxy M31s is the successor of the Galaxy M31 and brings new features to the segment. The Galaxy M31s sports a 6.5-inch Infinity-O AMOLED display with a hole punch at the centre. Just like the Galaxy M31, this too packs a big 6,000mAh battery, but this time around, Samsung has paired a 25w charger in the box. Samsung has also gone with a side-mounted fingerprint scanner on the Galaxy M31s. The phone has a “Glasstic” back which looks like glass but is actually made out of plastic. It is a fingerprint magnet and picks up fingerprints very easily.

Please stay connected with us for further updates. We will be keeping you updated from time to time.

Published in A to Z and Gadgets