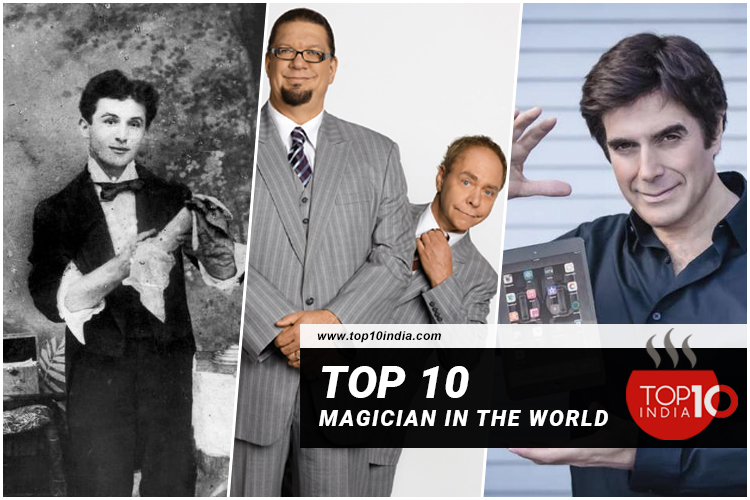 Top 10 Magician In The World: Magicians are the one that performs the different tricks, and illustrations. And that is not possible for everyone. Only a few can make it possible. Magicians practices their magic for years, and they can show it in public. Magicians have supers skills to perform different tricks.

Top 10 Magician In The World

In the new era, magic is not popular, but some people are still interested in it. Small kids also love magic because to get to see something unbelievable. So here is the List Of Top 10 Magicians in the World. These are some most popular magicians who have done some interesting and thrilling tricks.

Harry Houdini is ranked at the 1st position in the list of Top 10 magicians in the world. Harry Houdini is a very popular magician from America. He started his magic career in 1891 but didn’t get much famous. Later he focused more on the card tricks and became ‘King of Cards.’ In the 1900s, harry met William Melville and gave him the proof of escape from the handcuffs. After this successful escape, he was immediately booked Alhambra for six months. Later he became very popular and performed escape acts, illusions, card tricks, and outdoor stunts in the theaters of Great Britain. He also traveled to Netherlands, Germany, France, and Russia to perform and became popular in that places also. He also published many books. Some of them are – Miracle Mongers and their Methods, Houdini’s Paper Magic, A magician among the spirits, and Conjuring. Harry got married to Wilhelmina Beatrice ‘Bess’ Rahner during his struggling years. He became popular among many countries for his thrilling and escapes tricks.

Penn and Teller are two American magicians that perform magic with comedy. They both performed their first show together on 19th August 1975 at Minnesota Rennaisance Festival. As time passed, they both got popular among people. In 1987, They started the first of three board way runs. From the 1980s, this duo started working on Tv shows. Ans, some of the Tv Shows are – Saturday Night Live, The tonight show with Jay Leno, and Late Night with David Letterman. After this, they visited different countries and performed their magic there. This duo has also written many books about magic- Penn & Teller’s Cruel Tricks For Dear Friends, Penn & Teller’s How to Play with Your Food, and Penn & Teller’s How to Play in Traffic. The duo has different lifestyles; they didn’t interact with each other lives after work. They both respect each other as business partners. This duo performs light-hearted gags such as graphic tricks and clever pranks to tackling.

David Copperfield is an American Magician. At the age of 19, he organized the first ‘Magic of David Copperfield’ at the Pagoda Hotel in Honolulu.  In 1977, he hosted the show The Magic of ABC. From 1977 to 2001, Davis has 18 special Tv shows. Later, he performed in many tv shows and stage shows and became popular worldwide. David owns the International Museum and Library of the Conjuring Arts. In 2006, he purchased eleven Bahamian islands called Musha Cay. He is also ranked in the Guinness World record for Highest career earnings as a magician. Some of the most popular illusions of David are – Walking Through the Great Wall of China, Portal, Laser illusions, Flying Illusions, and death saw. David is an incredible magician and has many many awards, and made many records in Guinness World record.

David Devant was an English magician and shadowgraphs. At the beginning of his career, he was a Maskelyne & Cooke company member and performed daily at the Egyptian Hall. Later in 1905, Devant became a partner with John Nevil Maskelyne. As time passed away, he became e more and more popular. He was also invited to perform in  Royal Command Performances. Later, Maskelyne and Devant’s House of Magic became famous all over the world. In 1920, he retired from magic because he was suffering from Paralysis Agitans. Devant revealed his magic tricks in his book ‘Secrets of My Magic.’ He was also the first President of ‘The Magic Circle.

Apollo Robbins is a magician and security consultant from America. Robbins has claimed that he has learned these magical tricks from his brothers. Robbins got fame after Pickpocketing Secret Service agents lead with earlier President ‘Jimmy Carter’. He successfully imperceptibly took the keys of the President’s motorcade. He was also seen in my television shows. Robbins was featured at TEDGlobal in 2013, and its video was posted on Youtube and crossed over 20 million views. He was popular for his tricks of taking away things, but he always returned them. He was also known as a ‘Sleight-Of-Hand’ artist. Robbins got married to a Vietnamese-American magician ‘Ava Do.’

Shin Lim is a Canadian-American magician. He is mostly known for his close-up card magic and sleight of hand. Shin learned magic tricks through youtube. He started improving his skills, and he developed his own tricks. And he used the platform YouTube to show his performances and technique. At the age of 20, Lim was diagnosed with Carpal tunnel syndrome. After this, he chooses a magic career over a pianist. In 2012, he participated in the International Federation of Magic Societies World Championship and was ranked at 6th position. This was a big success for his magic career. After this, he was invited to the show Penn & Teller: Fool Us, and guess what is successfully fooled the hosts. In 2018, he participated in America’s Got Talent and became the winner of that show. In 2019, Lim married Casey Thomas. He has won many shows and awards during his magic career.

David Blaine is an American illusionist, magician, and endurance artist. He started his career in the year 1997, his first television special, ‘Street Magic.’ In 1999, he was buried in an underground plastic box underneath a 3-ton water-filled tank for seven days. Blaine has performed many dangerous and unbelievable tricks during his whole career. Some of his most dangerous and thriller tricks are – Drowned Alive stunt, Revolution stunt, Dive of Death, Electrified, and Vertigo. Some of his popular tv shows – Real or Magic, beyond magic, the magic way, and Ascension. David married Alizée Guinochet and has a daughter named Dessa.

No 8. Val Valentino (Top 10 Magician In The World)

Val Valentino is an American magician. Val started his journey as a magician at the age of 5 by the trick of the ball and vase his father gave him. In his teenage, he performed at the International Cultural Awareness Program. His performance revealed magic secrets to encourage others to become magicians from 1997 to 1999, Val in 2 Fox Network specials. In 1999, Val was also seen in a Masked Magician persona on an episode of Diagnosis: Murder. In 2012, a book was released by Heavy Ink, starring the character of the Masked Magician.

James Randi was a Canadian-American magician. He started his magic career in 1946 with stage magic tricks and escapologists. In his early career, he performed many escapes from jails and safes around the world. In 1956, he remained for 104 minutes in a sealed metal coffin submerged in a hotel swimming pool. He was also seen in television shows Wonderama and The Magic Clown. Some popular books of James are- Flim-Flam, The Faith Healers, Psychic Investigator, Test Your ESP Potential, and An Encyclopedia Of Claims. James married José Alvare on 2nd July 2013 in Washington. James also formed the James Randi Educational Foundation.

Siegfried and Roy are the two German-American magicians and entertainers. They started their career by performing in European Nightclubs with Tigers. In 1981, they performed in the show Beyond Belief at the New Frontier Hotel. They were also seen in some Tv series – Father of the Pride and Siegfried and Roy: The Magic Returns. They have also performed in some movies –  Vegas Vacation, Oceans Eleven, Showboy, and Siegfried and Roy: The Magic Box. In 2010, they both announced their retirement from show business.

David Copperfield is the No 1 magician in the world.

2. Who are the two famous magicians?

Penn and Teller are the two famous magicians.

3. Who is the best illusionist in the world?

David Blaine is the best illusionist in the world.

Published in A to Z, Entertainment, General knowledge, News, Personality and Social