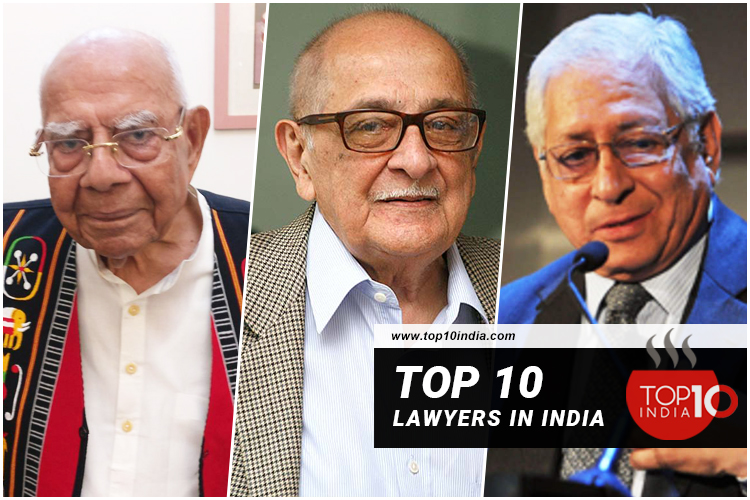 Top 10 Lawyers in India: Lawyers are the one, who knows all the laws of the constitution of India. They know who to deal with injustice. Lawyers help people in getting by justice by their knowledge and skills.

India has many great and outstanding lawyers and has served for many years. Lawyers also manage business disputes of big companies and are paid great amounts for it. So, here is the list of Top 10 Lawyers in India. These are the most popular lawyers in India.

Ram Boolchand Jethmalani is an Indian lawyer and politician. He started his career as a lawyer and Professor in Sindh before partition. He fought his first case at the age of 17, under Justice Godfrey Davis. In 1954, he became a part-time Professor at the Government Law College, Mumbai. In 1996, he also became a member of the International Bar Association. He was involved in several high-profile defense cases as a lawyer – Harshad Mehta and Ketan Parekh, and L. K. Advani. In 1988, a member of the Rajya Sabha. In 1996, he became Union Minister of Law, Justice, and company affairs. In 2010, he was elected as the president of the Supreme Court Bar Association. He announced his retirement from the judicial profession in 2017. In 1977, he was awarded the Human Rights Award by World Peace Through Law.

Fali Sam Nariman is a senior advocate to the Supreme Court of India since 1971. He started his law practice at the Bombay High Court. He has fought many major cases in his career. Some of them are – Golak Nath, S.P Gupta, T.MA. Pai Foundation and many more. He was a President Appointee member of the Rajya Sabha from 1999 to 2005. He served as President of the International Council for Commercial Arbitration. He was also the Chairman of the Executive Committee of the International Commission of Jurist. He was awarded Padma Bhushan in 1991.

Soli Jehangir Sorabjee was a popular lawyer and jurist of India. He started his career in 1971 as a senior advocate of the Bombay High Court. From 1977 to 1980, he served as the Solicitor-General of India. He also worked on the Citizen’s Justice Committee. Some major cases of Sorabjee were – S.R Bommai vs. Union of India, I.R Coelho vs. State of Tamil Nadu, B.P Singhal vs. Union of India, and many more. He was the chairman of the Transparency International and Convenor of the Minority Rights Group. From 2000 to 2006, he served as a Permanent Court of Arbitration member at the Hague. He was honored with Padma Vibhushan to defend the freedom of expression and the protection of human rights.

K.K Venugopal is an Indian constitutional lawyer and a senior advocate at the Supreme Court Of India. He was the president of UIA – International Association of Lawyers. The Royal Government of Bhutan appointed him as the Constitutional adviser to draft the Constitution of Bhutan. In 2017, he was appointed as the Attorney General of India.  He has fought several varieties of cases in the last 50 years. In 2015, he was honored with the Padma Vibhushan award by the Government of India.

Gopal Subramanium is a very well-known Indian lawyer. He started his career with Shradul S Shroff in 1980. He was a counsel for the states Madhya Pradesh and Uttar Pradesh. From 2009 to 2011, he was a Solicitor General of India. He was also the Chairman of the Bar Council of India. He also fought on behalf of the Government of Delhi in a case concerning the constitutional division of powers between the Delhi Government, the Union Government, and the Lieutenant Governor of Delhi. In August 2020, he founded the Subramanium Study Centre in Oxford. He is a constant lecturer and speaker on law, primarily in the UK and India.

Abhishek Manu Singhvi is an Indian lawyer and politician. In 1997, he became the youngest Additional Solicitor General of India. From 2001, he became the National Spokesperson for Indian National Congress. In 2006, he was elected for the Rajya Sabha. In 2010, he became a member of the Consultative Committee for the Ministry of External Affairs. He is currently a member of the Parliament of India and representing West Bengal in the Rajya Sabha. He is one of the senior advocates of the Supreme Court Of India.

Palaniappan Chidambaram is a lawyer and politician in India. He applied as a lawyer in the Madras High Court and became a senior advocate in the year 1984.  He has practiced in the Supreme Court of India and many other high courts. He was a union leader for MRF and worked with the Congress party. He was the President of the Tamil Nadu Youth Congress. In 2001, he formed his own party Congress Jananayaka Peravai and focused on the regional politics of Tamil Nadu. In 2008, he was appointed the Union Home Minister. He was also the Finance Minister of India. He currently serves as a Member of Parliament ‘Rajya Sabha’.

Harish Salve is an Indian senior advocate. He started his career in 1980 as an intern at  J. B. Dadachandji & Co. and later a full-time lawyer. From 1999 to 2002, he worked as the Solicitor General of India. He mostly represents large corporations like – Reliance Industries LTD, Tata Group, and ITC. He also represented the Vodafone tax dispute with the Government of India. Firstly he lost the case at Bombay High Court but won it at the Supreme Court. In 2015, he also took up the high-profile case of actor Salman Khan. In 2020, he was appointed as a Queen’s Counsel for the courts of England and Wales.

K.T.S Tulsi is an Indian politician and a senior advocate in the Supreme Court of India. He started his career in 1980 and started practicing criminal law. In 1987, he was appointed as a senior advocate. In 1990, he became the Additional Solicitor General of India.  He has represented the Indian government over ten times in the Supreme Court. From 1994, he is the President of the Criminal Justice Society of India. In 2014, he was nominated as a member of the Rajya Sabha.

Salman Khurshid Alam Khan is an Indian lawyer and politician. In 1980, he became the Deputy Minister of Commerce in the Government of India. In the 2009 General Election, he was elected as a Member of Parliament from Farrukhabad. He was the Cabinet Minister of the Ministery of External Affairs. He has become the President of the Uttar Pradesh Congress Committee two times. He is also the President of the Delhi Public School Society. He is one of the most successful lawyers in India.

Ram Boolchand Jethmalani was the No 1 lawyer of India.

2. Who is the best lawyer in India?

3. Who is the highest-paid lawyer in India?

Ram Boolchand Jethmalani was the highest-paid lawyer in India.

Published in A to Z, News, Personality and Sociology & Society