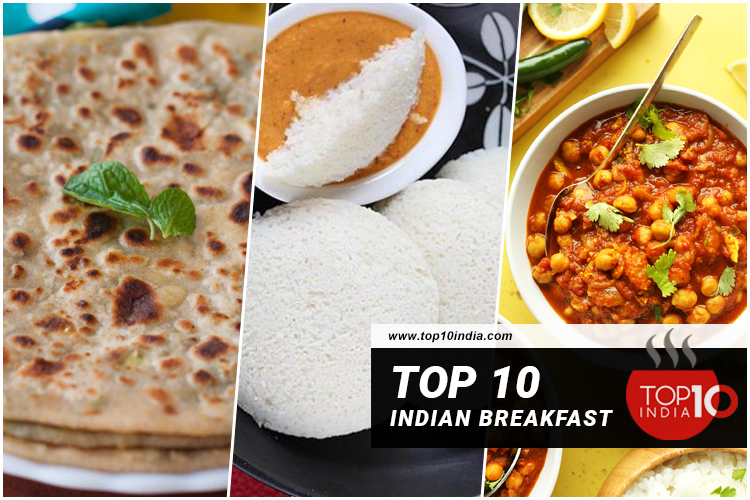 If we talk about the most energising meal of the day, breakfast containing protein, carbohydrates, fibre, and fat, then the rich Indian breakfast surely offers you poha, idli, upma, parantha, and many more food items cooked in ghee and oil. Indians usually consume curd, milk etc., in the morning that is a rich source of protein. India has many states, and all the people of these states enjoy various items in breakfast, be it of any state. Here is our list of the top 10 Indian Breakfast.

Pratha is one of the famous and the best breakfast in India that we all relish and consider it as a staple in the morning is golden brown in colour and known as Indian bread. The name Pratha is derived from the words parat and atta (flour).

It is baked in ghee and consists of whole wheat flour. It is made in various shapes like triangular, square, and round. The parathas are also stuffed with garlic, boiled potatoes, cauliflower, paneer, radish, chilli, or ginger.

Sometimes they are also served with yoghurt, pickles, homemade chutneys, vegetable curries, and meat. Pratha is traditionally consumed with lassi, that is, buttermilk in Punjab. Parathas are also served in hotels and restaurants in India that we all love to relish.

Idli is a South Indian menu that is now prepared in all the states of India. Especially, it is loved by kids. People serve it with Sambhar. Idli is a type of savoury rice cake that originated in India and is now popular in Sri Lanka.

It is baked or cooked with rice and fermented lentils, which are then steamed. The idli is served hot, and you will enjoy it the most with coconut chutneys. There are many versions of idli, such as Rava idli and malli idli, as it is trendy in India.

Idli can also be made with rice, but using Rava is better as it is more healthy.

Chana Masala is one of the special dishes in North India, and it is tangy in taste that can be served with paratha in the morning or with naan. People in Inda also consume it as a snack, breakfast, or meal. Chana Masala is a delicious and flavoured Indian curry made by cooking chickpeas in a spicy onion tomato masala gravy.

Chana Masala is one of India’s most popular vegetarian dishes, and it is also served in school canteens, at work, or on railway platforms. This dish can also be served with rice and roti. Seeing the popularity of Chana Masala, people in India have also started eating Chole aaloo, made with potatoes and chickpeas.

Appam is one of the most popular Indian breakfast that is a sort of bowl-shaped pancakes which is made from a batter of rice flour and coconut milk. The shape is derived from the small Appa Chatti in which they are cooked. It is consumed for both breakfasts and dinner, especially in Tamil Nadu, Kerala, and Sri Lanka. People outside India bake appam on a stone.

At present, it is served with some spicy coconut milk curry.

It is one of the highly nutritious meals that could be taken or eaten in breakfast, lunch or dinner, and is also accompanied by rice or Indian flatbreads such as roti and naan. People in few states of India usually eat it for breakfast. It has its roots in Punjab. It is one of the most loved North Indian Dishes. It is effortless to prepare and could be made in so many ways.

Upma is an Indian dish prepared for kids in breakfast for school and is eaten too by other age groups. Upma is made with dry semolina or rice flour and is churned into a thick porridge. Upma is served hot for breakfast, and its taste is slightly bland, so various beans, spices, and nuts such as turmeric and chilli are later added to the dish to improve its flavours.

Upma is mainly originated in South India but has now gained popularity and is eaten throughout the country. Upma is served with grated coconut chutney instead of sauce and pickle. Choosing good quality rava is very important to make a good upma.

If the rava is not roasted well, Upma becomes sticky. Over mixing of starch should be avoided in rava as it makes it sticky.

Misal is one of the popular spicy dishes that is often served in Maharashtra for breakfast. This dish contains many ingredients such as curd, pav, moth bean, spiced potatoes, gravy, and is later garnished with coriander, onions, and tomatoes.

The base of Misal needs to be crunchy, but its taste is spicy. After it is prepared, the dish looks colourful as red, orange, brown, and green. The dish is mostly eaten for breakfast, a midday snack, or sometimes a one-dish meal.

It remains a favourite snack, and it has a good nutritional value. The cooking time of this dish is about 45 minutes. It is also served by hand carts, factory canteens, fast food joints and fine dining restaurants.

Nihari is one of the non-vegetarian meat-based dishes that has originated from New Delhi. At the time of Independence in 1947, when the people from Pakistan shifted here, they started their small food points or restaurants and started serving Nihari in breakfast in India in Delhi. Especially the Muslims relish this meal for breakfast.

The ingredients of this dish are mutton, chicken, or beef shanks. The dish is cooked together with numerous spices such as cumin, cloves, garam masala, and cardamom in the big vessels. It takes 6 to 8 hours for this dish to be cooked properly. It is flavoured with long pepper and a relative of black pepper.

Puri is a deep-fat fried bread that is made in almost every kitchen in India using whole-wheat flour. The dough is rolled into flat round shapes, and it is fried in vegetable oil and ghee. The dough absorbs the oil in the wok, and puri gives out a puffy appearance and an appealing golden colour while it is fried.

It is consumed as a side dish, along with spicy curries, creamy, or various vegetable dishes. It is eaten for breakfast or as a snack, or a light meal. It may also be eaten with sweet dishes. During a few festivals in India, like Durga Ashtami, every household cooks puri with halwa and serves girls.

Dosa, a very mouth-watering breakfast food, prepared mostly in the south of India. But people across the country take it as an evening snack too.  Dosa comes in a variety like onion dosa, paneer dosa, potato dosa, masala dosa etc. Basically, it is excellent and crisp and is served with coconut chutney and sambhar. Dosa can be cooked in oil, ghee or butter that best suits your taste. It is not deep-fried, tempered or seasoned. You need to spread the batter on the tawa and flip it once or twice until it turns golden and cooked. Dosa doesn’t need spice in it and is filling, tasty and healthy for you to eat as breakfast or whenever you like.

Paratha is a typical Indian breakfast.

Idli Sambhar or Dosa Sambhar is the best Indian Breakfast.