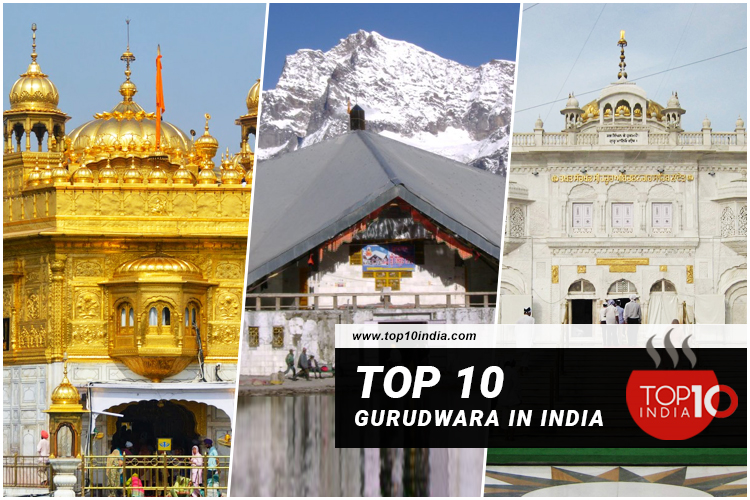 Top 10 Gurudwara in India | List of Gurudwaras in India

Top 10 Gurudwara in India: It is a place where all the Sikhs come together for worship. The meaning of “GURUDWARA” is ‘the residence of the guru,’ or ‘the door that leads to the guru.’ Sikhs refer to Gurudwara as Gurudwara sahib. The followers of Guru Granth Sahib, the holy book of Sikhism, the main feature of Gurudwara is to listen to the praises of Lord God and true guru in association with the true congregation of the devote worshipers and recite the prayers in Guru Granth Sahib.

In this article, we are going to discuss the best Gurudwaras in India. Which is based on these public spaces, the provisions of daily services, and many more. Here is the list of Top 10 Gurudwara’s in India.

This place is also known as Sri Darbar Sahib and Golden Temple. This temple is famous all over the world, not only in India. Several people come to visit this holy place for worship. It is counted among the top sightseeing spots in India. It is constructed with white marble, overlaid by the genuine gold leaf; Maharaja Ranjit Singh Ji had covered the upper part with gold. A Lotus-Shaped dome was covered with 100kg of gold: the fifth Nanak, Guru Arjan Sahib, himself designed and created this central place of worship.

This Gurudwara is located in the district of Uttarakhand, which is Chamoli. It is an altitude of 4000 meters above sea level. It is so beautiful as well as an example of perfect Vastu art. It has been seen that it is closed from October to April due to heavy snowfall in the area. It is devoted to Guru Gobind Singh (1666-1708). General Harkirat Singh is the person who made this gurudwara. It was constructed around the 1960s. He selected Architect Siali to lead the design and construction of this sacred pilgrimage site; it was built keeping all the environment and climatic conditions in mind.

It is one of the five takes in Sikhism. It is situated on the banks of the Godavari river in Nanded city of Maharashtra. The Gurudwara located in it is called ‘Sachkhand’ that is the “religion of truth.”Angitha Sahib is the inner room of the gurus. It is believed that the last rites of Guru Gobind Singh were performed at this place in 1708. It was built between 1832 and 1837by Sikander Jah, Asaf Jah, upon the request of his friend Maharaja Ranjit Singh.

It is dedicated to Shri Guru Gobind Singh Ji. This place is located in the Sirmour district of Himachal Pradesh. At this place, Guru Gobind Singh Ji spent four years of his life and was the composition of Dasam Granth. In this Gurudwara, a museum shows the pen and weapons of its time used to use the guru. The gurdwara enjoys a high historical and religious importance among the followers of the Sikh religion world over. The site is situated on the bank of River Yamuna.

It is Delhi’s oldest and historically Gurudwara. It is dedicated to the ninth Sikh Guru, Guru Teg Bahadur. At this place, Guru Teg Bahadur was sentenced to death. It is one of the nine historical Gurdwaras in Delhi. It was first constructed in 1783 by Baghel Singh to commemorate the martyrdom site of the ninth Sikh Guru; It is situated in Chandni Chowk in the midst of Old Delhi. It dates back to 1675, built-in 1973 in the late 18th Century; this Sikh temple features ornate details & peaceful temperature.

It is present in the Fatehgarh district of Punjab. In the year f 1704, Sahibzada Fateh Singh and Sahibzada Zorar Singh were given the pinch alive in the wall here on the orders f Faujdar Wazir Khan. It was made in the memory of his martyrdom. The main feature of this Sikh architecture with white stone structures and a golden dome. It is in the state of Punjab in India; the gurudwara marks the 1710 conquest of the city by the Sikhs under the leadership of Banda Singh Bahadur. It is captured that the area and razed the fort built by Ferozshah Tughlaq to the ground.

It is located in the Talwandi Sabo Village of South-east, 28 km away from Bathinda, Punjab. It is one of the five takhts of Sikhism. Guru Gobind Singh Ji stayed here after fighting against Mughal atrocities. Because of this, It is also known as ‘Master of Kashi.’ This title was given because of the intense literary activities that Guru Gobind Singh engaged in during his stay there. Today, the place is known as Fatehgarh Sahib.

It is said that this is the first place where Guru Nanak Dev Ji meditated during his visit. It is built between the hills of Manali and therefore the view here is so beautiful. This place has been a place for Hindus and Sikhs as it has many temples and a gurudwara. Nestling among Sylvan surrounding Parbati valley, Manikaran is famous for its hot springs. Manikaran, at an altitude of 1829 mt. and 40kms from Kullu, has the finest hot water springs. People from all across the world come to take a dip in these waters. It is believed that this water has healing power for various diseases as well as cure muscle pain.

Gurudwara Sri Keshgarh Sahib is in the city of Anandpur in Punjab. It is said that the town of Anandpur was founded by the 9th Guru Teg Bahadur of the Sikhs. Guru Gobind Singh Ji, who spent 25 years of his life in the city, added greatly to the city’s size given the new name, ” City of Bliss(Anandpur).”The fort is now Takhat called Keshgarh Sahib. The most important shrines at Sri Anandpur Sahib are Gurudwara Keshgarh Sahib, where the “Khalsa” was born. It is regarded as one of the five sacred “Takhats” or seats of Sikhs’ religion.

It is located in central Delhi; it was originally a bungalow of Raja Jai Singh. The eighth Sikh guru, Guru Har Kishan, resided here, which was later converted into a Gurudwara in memory of Guru Har Kishan Ji. It is one of the most prominent Sikh gurudwara. It was first built as a small shrine by Sikh General Sardar Baghel Singh in 1783.

Q- Can I stay in Gurudwara for free?

A- Generally, the free stay is provided in Open halls where many people can stay together. Few of the gurudwaras in India are huge and offer a variety of accommodations.

Q- Which is the biggest Gurudwara in India?

A- The Golden Temple is the holiest Gurudwara of Sikhism next to Akal Takht, a Sikh seat of power.

Q- How many Gurudwaras are in India?

A- 32 Gurudwaras in India | holy religious places in India.

Published in A to Z, News, Social and Sociology & Society