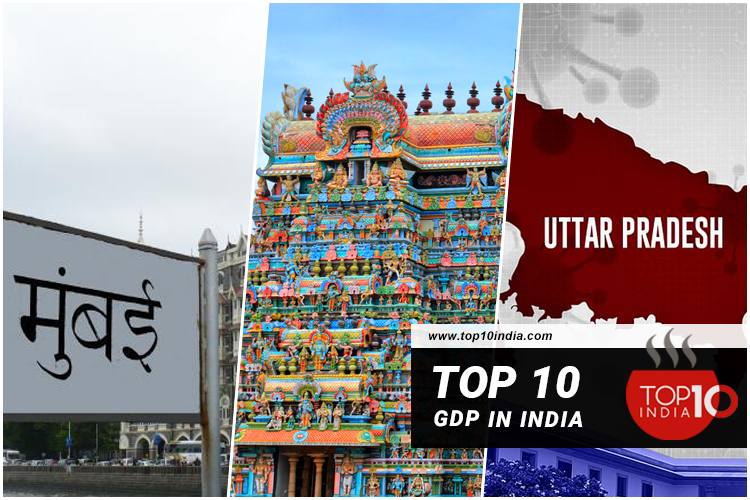 Top 10 GDP in India:- Gross Domestic Product(GDP) is the total monetary or market value of all the finished goods and services produced within a country’s borders in a specific time period. GDP is the scorecard of a country’s economic health. Though GDP is typically calculated on an annual basis, it is sometimes calculated quarterly. GDP can be calculated in three ways, using expenditures, Production, or incomes. It can be adjusted for inflation and population to provide deeper insight. GDP is a key tool to guide policymakers, investors, and businesses strategic decision making. The GDP of a country tends to increase when the total value of goods and services domestic producers sell to foreign countries.

In this list, we have mentioned the top 10 GDP in India. We have categorised the state with their Gross Domestic Product annually, or we can say that total goods and services producers sell to the foreign countries. India’s economic health depends on the GDP rate of its states. The state in which agriculture is the eminent source to live life has a good GDP rate. So, we have a list according to these expectations.

The economy of Maharashtra is the largest in India. It is one of the most urbanised Indian States. Maharashtra is India’s most industrialised state contributing 20 of national industrial output. Mumbai is the major port of Maharashtra which led to flourishing trade and industrial development since 17th century A.D. Maharashtra Gross State Domestic Product at the current price was Rs. 32.24 trillion 2019-20. In 2020-21, two new schemes, Gramin Sadak Vikas Yojana and Nagari Sadak Vikas Yojana, have been announced for the construction of roads in rural and urban areas, respectively.

The economy of Uttar Pradesh is the 3rd largest of all states of India. According to a report published by the Ministry of Statistics and Programme Implementation, the Government of India the nominal GDP of the state for the year 2020-21 is ₹ 17.05 lakh crore (US$ 230 billion). The largest Indian state, Maharashtra, based on Nominal GDP, has an urban population of 5,08,18,259, while Uttar Pardesh has an urban population of 4,44,95,063. Uttar Pradesh is a major contributor to the national food grain stock. UP has witnessed rapid industrialisation in the recent past, particularly after the launch of economic liberalisation policies in the country. The infrastructure in UP is improving in comparison to the other advanced states of India.

Karnataka is one of India’s highest economic growth states, with an expected GSDP(Gross State Domestic Product) growth of 8.2% in the 2010-11 fiscal year. Karnataka recorded the highest growth rates in terms of GDP and Per Capita GDP in the last decades compared to other states.  Karnataka received US$2,026.4 million worth of Foreign Direct Investment for the fiscal year 2008–09, place it in the third spot among states in India. Agriculture is the primary occupation for Karnataka’s rural people. Karnataka has one of the largest concentrations of higher education, including medical and engineering colleges.

The economy of Gujarat, a state in western India, has significant agricultural and industrial production within India. The major agricultural produce of the states includes cotton, groundnuts, sugarcane, date, milk, and milk product. Gujarat is one of the most industrialisation states with a significant presence in pharma, chemicals, refining, and petrochemicals, ceramics, textiles, automobiles, etc. Gujarat ranks second nationwide in gas-based thermal electricity generation with a national market share of over 8%.

The economy of  West Bengal is the sixth-largest of all states in India. After India’s independence, West Bengal was still dependent on the central government for meeting its demand for food as production remained stagnant and the Green Revolution bypassed the state. The state is the largest source of important food crops like rice and potato. It is also the second-largest tea-producing state in India. West Bengal has a total road length of 92,023 kilometres (57,180 mi), with a road density of 1.04 km per km2.  West Bengal is the major river port in eastern India.

Telangana is one of the fastest-growing states in India, posing an average annual growth rate of 13.09% over the last five years. Telangana’s nominal gross state domestic product for the year 2020-21 stands at ₹11.05 lakh crore (US$150 billion). The service sector is the largest contributor to Telangana’s economy, with about 65% in 2018-19. Agriculture is also the backbone of Telangana because the two important rivers, the Godwari and Krishna, flow through the state, providing irrigation facility. The state has also focused on the fields of information technology and biotechnology. There is 68 special economic zone in the state.

The economy of Andhra Pradesh is the fastest growing economy in India. The economy is primarily dependent upon agriculture. The state has been ranked the best state in ease of doing business in the country by the world bank. In 2019-20, the state was ranked eighteen with

1,69,519 in term of GDP Per Capita. Agriculture has been the chief source of income and main occupation for the state, with 60% of the population engaged in agriculture and related activities.

Rajasthan is a mineral-rich state and has a diversified economy with agriculture, mining, and tourism as its main growth engine. This state is the largest gold, silver, limestone, marble, rock, phosphate, and Ignite producer. It is the second-largest producer of cement and contributes one-tenth of the salt produced in India. Rajasthan is the 12th leading investment destination in India after Maharashtra, Gujarat, Delhi, West Bengal, etc., because of its environment, law and order situation infrastructure, investment climate and favourable population density.

Madhya Pradesh refers to the economic growth and case of the Indian state of Madhya Pradesh. It grew 12% in GDP for the year 2011-12, for which it received an award from President Pranab Mukherjee in January 2013 for improving its tourism, medical, and infrastructure growth.  There are many big industries in Madhya Pradesh. State-run NTPC will invest about Rs 20,000 crore to set up a 3,960-megawatt (Mw) coal-based power project in Madhya Pradesh. Madhya Pradesh has 6 ordnance factories, four of which are located in Jabalpur and one in Katni and Itarsi.

Based on the research and study, we have prepared the list of the Top 10 GDP in India. This list is prepared by taking all the record of the states like their agriculture activities, telecommunication, infrastructure development, and so on. There are also many states whose GDP and economy is good, like Delhi and Kerala. These two states have 11th and 12th rank in Statistics data of the country.

Stay connected and stay safe. We will always be updating you with new ideas.

Published in A to Z, Business and Economy