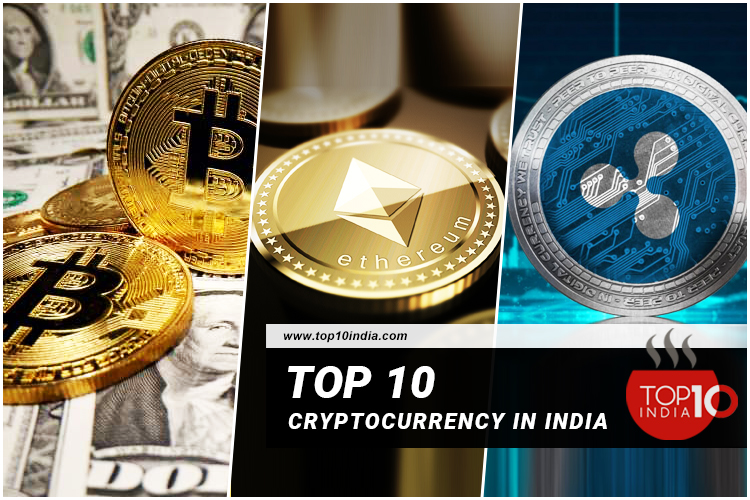 Top 10 Cryptocurrency In India:- A cryptocurrency is a digital or virtual currency secured by cryptography that makes it nearly impossible to counterfeit or double-spend. Many cryptocurrencies are decentralized networks based on blockchain technology- a distributed ledger enforced by a disparate network of computers.

Bitcoin is a cryptocurrency currency invented in 2008 by an unknown person or group of people using Satoshi Nakamoto. The currency is beginning to use in 2009. Bitcoin uses peer-to-peer technology to operate with no central authority or banks; managing transactions and bitcoins are carried out collectively by the network. Bitcoin is open-source; its design is public, nobody owns or controls Bitcoin, and everyone can participate. The symbol of bitcoin is ₿. Bitcoins are created as a reward for a process known as mining. The University of Cambridge researched in 2017 that there 2.9 to 5.8 million unique users using a cryptocurrency wallet. Bitcoin is criticized for its use in illegal transactions. The price as of 29 march 2021 of one bitcoin is $57,566.38, and the market cap is $1.075 trillion.

Ethereum is a decentralized open-source blockchain with smart contract functionality. It is the second-largest cryptocurrency by market capitalization, after bitcoin. Ethereum is the most actively used blockchain. It also has its own associated cryptocurrency—one of the big projects around Ethereum Microsoft’s partnership Consensus. Ethereum was proposed in 2013 by programmer Vitalik Buterin. In 2016 Ethereum was split into two separate blockchains, Ethereum and Ethereum classic. It enables smarts contracts and distributed applications to be built and run without any downtime, fraud, control, or interference from a third party. The price of 29 march 2021 of one Ethereum is $1,811.82, and the market cap is$209.464 billion.

Ripple is a real-time gross settlement system, currency exchange, and remittance created by Ripple Labs Inc. It is a US-based technology company. It was established in 2012. Ripple is built upon distributed open-source protocols and support tokens representing Fiat currency, cryptocurrency, commodities, or other value units such as frequent flier miles or mobile minutes. Ripple is a technology mostly known for its digital payment network and protocol. However, it also has its own cryptocurrency, XRP. Ripple transactions use less energy than bitcoin, are confirmed on the second, and cost very little. Versus bitcoin transactions use more energy, take longer to confirm, and include high transaction costs. The price of 29 march 2021 of one Ripple is $0.56, and the market cap is $24.598.

Litecoin is a peer-to-peer cryptocurrency and open-source software project released under the MIT/X11 license. It is started on 7 October 2011 by charlie lee, a google employee who later became engineering director on Coinbase. The  Litecoin network is started live on 13 October 2011. Litecoin is forked from bitcoin and is the seventh-largest cryptocurrency in the world. There will never be more than 84 million bitcoin circulation. In April 2021, the value of one litecoin was $310.73. Litecoin can be used as an avenue for paying people anywhere globally without an intermediary having to process the transaction.

Binance coin is not only one of the world’s leading cryptocurrency exchanges but its own one of the popular coins, too-Binance coin. Binance coin is the top 10 cryptocurrencies in the world by market cap. It was founded in 2017, and the founder is Changpeng Zhao, who had previously created high-frequency trading software. It can be used for trade and pay fees on the Binance cryptocurrency exchange. BNB can be the form of payment for crypto credit card bills on crypto.com. BNB can be used as collateral for loans on certain platforms. Also, some apps allow users to split bills and pay friends and family through Binance Coin.

Altcoins are cryptocurrencies other than Bitcoin. They share characteristics same as bitcoin but are also different from them in other ways. For example, some altcoins use a different consensus mechanism to produce block or validate transactions. Some of the main altcoins include mining-based cryptocurrency, Stablecoins, Security Tokens, Utility tokens. The number of altcoins listed in cryptocurrency markets has rapidly multiplied in the last decades and attracted hordes of retail investors feverishly betting on their price movement to amass short-term profits. Altcoins like Stablecoins can potentially fulfill Bitcoin’s original promise of a medium for daily transactions. Investors can choose from a wide variety of altcoins that perform different functions in the crypto economy.

Buyucoin is another pioneer in the cryptocurrency market in India. It was founded in July 2016. BuyUcoin is a crypto wallet and exchange platform where merchants and consumers can transact with digital assets like bitcoin, ethereum, ripple, etc. It provides a convenient and trustworthy forum for several cryptocurrencies and many others to purchase, exchange. It is founded by  Shivam Thakral, Devesh Aggrawal, and Atulya Bhatt. Buyucoin has created and proposed a “sandbox” system to monitors cryptocurrencies in India.

Polkadot is a heterogeneous multi-chain exchange and translation architecture which enables customized side-chain to connect with public blockchains. Ethereum created the protocol, and the co-founder is Gavin wood. The technology surrounding Polkadot is set to help support the decentralized of the web, a concept created by Dr. wood. The price as of March 29, 2021, of Polkadot, is $33.74, and the market cap is $31.349 billion. This cryptocurrency is designed to reward genuine investors and weed out people trading on the stock market to make money fast. The investor engaged in the company also helps to make decisions on things like network fees, network upgrades and establishing or removing Parachains. Polkadot doesn’t have a track record for comparison, making it a riskier investment for potential buyers.

Chainlink is unique as a cryptocurrency because it has an appealing price. It is a decentralized oracle network and cryptocurrency that provide real-world data to blockchains. It was founded in 2017, and the founder is Sergey Nazarov. In April 2021, chainlink released an updated version of its whitepaper. The price as of March 29, 2021, of chain link, is $28.06, and the market cap is $11.689 billion. It’s also available for trading on coinbase and one of the largest cryptocurrencies in the world. It has a lower volume and market cap than more appealing cryptocurrencies. That’s why Chainlink ranks so low on the top 10 list.

Stellar Lumens is an open-source, decentralized protocol for digital currency to fiat money transfer which allow cross-border transaction between any pairs of currencies. It was initially released on July 31, 2014, and the founder is Jed McCaleb. It’s essentially Paypal of cryptocurrency network, serving as a bridge between banks and blockchains networks. It makes transactions cheaper and faster than they would be with a traditional bank. If another cryptocurrency creates a better platform and takes traffic from stealer, it will affect the company stock value.

Question:- Is cryptocurrency is legal in India?

Answer:- According to the budget of 2018-19, the government of India does not consider cryptocurrencies legal tender or coin in India and will take all measures to eliminate uses of these crypto-assets in financing illegitimate activities or as part of the payment system.

Based on research and study, we have present this list. This list of Top 10 Cryptocurrency In India is mention according to their volume and market cap in the market.  Some more cryptocurrencies in India were not included in this list, like Coinswitch, Zebpay, CoinDCX, and Wazir X. Cryptocurrencies have a lower market cap. People are not interested in investing in these digital protocols.

Please stay connected with us; we will always update you with new cryptocurrencies in India.

Published in A to Z, Business and Economy