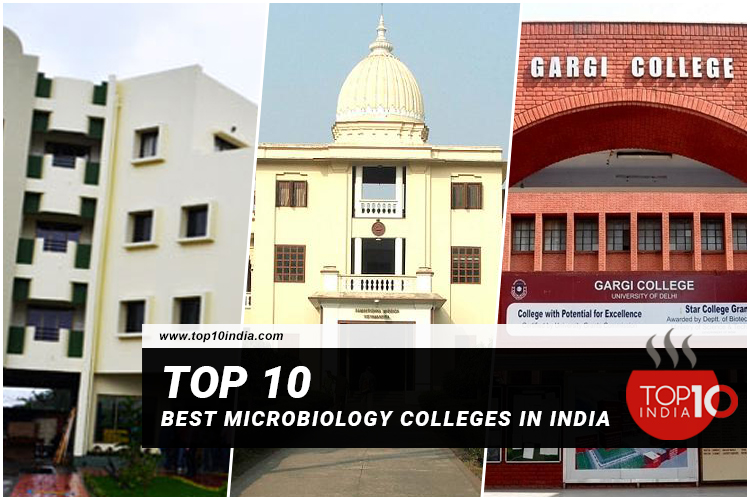 Top 10 Best Microbiology Colleges in India: Microbiology is the study of microorganisms which is hardly visible through naked eyes. This includes bacteria, viruses’ archaea, fungi, protozoa, prions, and algae; these are collectively called ‘Microbes.’ This discipline of science includes fundamental research on the biochemistry, physiology, cell biology, ecology, evolution, and clinical aspects of these microbes including the response of the host by these agents.

The microorganisms can be unicellular (single-cell), multicellular (cell colony), or acellular (lacking cells). They can be of any type, even prokaryotes, and eukaryotes. The existence of microorganisms was predicted very early before they were even observed. Studying microbiology ensures prevention, diagnosis, and control of infection and specific diseases. There are more than 800 colleges of microbiology in India, out of which we have made the list of top 10 colleges, which are as follows-

St. Xavier College, Kolkata, is the best institute in microbiology and is ranked number one in the country. The College was established in 1860 and is the first private college for higher education in Kolkata, which became the first autonomous college of West Bengal in 2006. The college has a well-built infrastructure with a library, labs, Spacious and well-maintained classrooms with more than 8500 students. The microbiology department of the college was started 15 years ago. The syllabus is module-based, having microbiology, Biophysics, Molecular Biology, Genetics, etc. Modern methods of studying are used in this college as audio-visual classes, lab training, seminars, presentations, and writing a critical appreciation of scientific papers.

Ramakrishna Mission Vidyamandir College was founded in the year 1941 and is affiliated with the University of Kolkata. It is a government-aided degree college. The college is an autonomous degree college located in Belur, Kolkata, near Belur Math, with nearly 11 acres. The college’s strength is 805 students with 53 faculty members and is administered and maintained by Ramakrishna Mission Ashram. This college is fully residential devoted to male candidates only. The college is granted by University Grant Commission (UGC), i.e., it follows the UGC guidelines.

The Gargi College was established in 1967 and is a renowned college of Delhi University, which has been honored with Star College Status by the Department of Biotechnology, Government of India. The college is named after a female saint or scholar, Gargi from the ancient Vedic era, a substance woman. The college is affiliated with the University of Delhi and recognized by UGC (University Grant Commission). It is one of the best colleges for women in India, with around 10 acres. 4000 students get enrolled every year in this college, and it is well equipped as bioinformatics lab, Research facilities, dedicated classrooms, Digital library, seminar hall, and big sports field.

The Ramakrishna Mission Vivekananda Centenary College is one of the best colleges in West Bengal, which is named after Swami Vivekananda. It is also popularly known as V. C. college and was established in the year 1963. In its early days, the college was affiliated with Calcutta University, but currently, it is affiliated with West Bengal State University. It is an Autonomous college recognized by UGC, New Delhi. Its campus is spread over an area of 4 acres. The college is for boys only and offers eleven courses across one stream of microbiology.

Madras Christian College was established in the year 1837. It is one of the oldest colleges in Asia. The college is affiliated with the University of Madras, but it works as an autonomous institution. This Institute is spread over an area of 325 acres. Originally the college was started as the School for Boys. MCC has supported promoting a wide range of Biodiversity on its campus. It has the second largest shrub jungles in Asia used for practical work. The strength of the college comprises 8500 students along with 300 faculty members. The college offers forty-four courses across ten streams.

Shoolini University was founded in 2009 near Kasauli in Solan district Himachal Pradesh. The university is recognized by the University Grants Commission (UGC) by the Foundation of Life sciences and Business Management. Initially, in 2005, the university was named Shoolini Institute of Life Sciences and Business Management. Institute focuses on research work, and its students have filed nearly 400 patents up till now. The study of microbiology in this institute includes edge-cutting methods to learn about pathogenic microbes, biological diversity, evolution, and biotechnology. Its campus area is spread over 14.37 acres of land. The university has collaborations with Coursera, which enables its students to access 3500 courses for free.

School of Basic Sciences and Research (SBSR) is a college of Sharda University in Greater Noida, Uttar Pradesh. The school is unique in imparting knowledge in pure sciences, which forms the foundation for further academic pursuits in science and technology and acts as a base for students to pursue a career in research and learning. The infrastructure is the real highlight of this college, with the classrooms, hall, labs, auditorium, and library all are fully air-conditioned. The student-faculty ratio is 1:20. Few important details of the college are as follows-

Aligarh Muslim University, also known as AMU, was established in the year 1920. Formerly established by Sir Syed Ahmad Khan as Muhammadan Anglo-Oriental College in 1875 till 1919 because, in 1920, it evolved into AMU (Aligarh Muslim University). The campus size of this university is 1155 acres of land. It has 98 departments with more than 28000 students. It is one of the oldest and most reputed universities in Uttar Pradesh. Some of the important details about the placements are as follows-

Vellore Institute of Technology (VIT) was founded in 1984 by G. Swami Nathan and was formerly known as Vellore Engineering College. VIT is a privately owned deemed University which is recognized by UGC (University Grant Commission). It is recognized as an “Institution of Eminence” by the Government of India and has a campus area spread across 372 acres of land. The Institute has state-of-the-art labs and a central library. The library has a collection of more than 2.4 lakhs of books. The classrooms are well equipped with smart boards and installed with an IT system.

GITAM Institute of Science is a constituent college of GITAM in Visakhapatnam, Andhra Pradesh. GITAM is a Deemed to be University and was established in the year 1995. The institute offers 31st courses across 5 streams. The institute has well-equipped and advanced labs for academic research. Some further details about the institute are as follows-

Which is the best college for microbiology in India?

Which Microbiology college has the best placements in India?