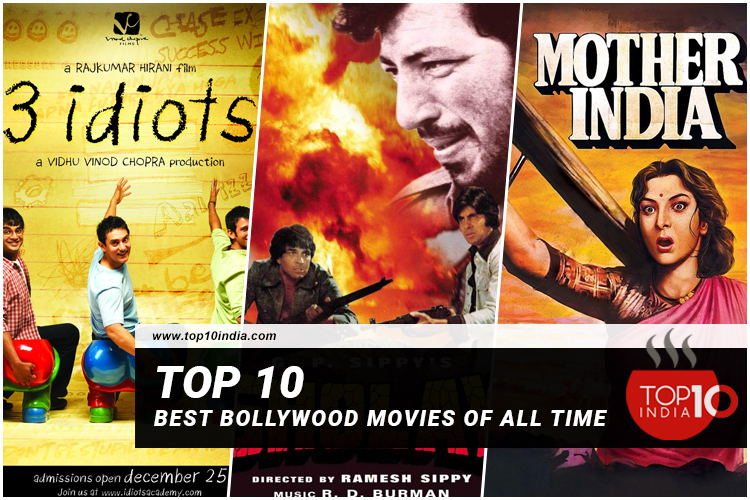 Top 10 Best Bollywood Movies of All Time: Bollywood has created some awesome movies that touch our hearts and emotions in one way or another. If you are a new fan or an old one, there are certain movies that every movie lover should at least watch once. Therefore, we have created a list of the Top 10 Best Bollywood Movies of All-time, that will give you a real fun time and a glimpse of the history and stature of Bollywood.

Here is the list of top 10 Best Bollywood movies from all generations that are considered to be the masterpiece and some of the finest works of the Bollywood industry. The list is as follows-

This movie is an adaptation of Chetan Bhagat’s novel “Five Point Someone” and is the best Bollywood movie of all time. This movie is a complete entertainment package as it has everything, Comedy, tragedy, Emotions, Romance, and Drama. The movie hits a satire on the Education system of India and showcases the pressure students have to face to score good marks. The story revolves around the friendship of three students in an engineering college among which Rancho is the most intelligent and out-of-the-box thinker. This movie will stick you to your seat until it is finished.

One of the most famous movies of all time in Bollywood is “Sholay”, which is a blockbuster movie not only because of the star cast but also contains some of the most famous movie dialogs ever. The story revolves around a personal war between a retired police officer “Thakur” and a notorious Dacoit “Gabbar Singh”. Thakur is eager to take revenge on Gabbar as he Massacred Thakur’s whole family for putting him behind bars. Thakur hires two petty criminals for his help as he knew them earlier because of their bravery, once in a hostile situation where they saved his life. The character of Gabbar Singh is still very famous and considered the best Villain of Bollywood to date.

“Mother India” is an epic Bollywood drama film that shows a story of the misfortunes of a mother, who is poverty-stricken and raises her sons with many difficulties and struggles of life. The movie is a statement about the strength of a Woman/Mother that how strong her character is even against all odds and miseries she did not deflect from her values and morals.

“Taare Zameen Par” is one of the best enlightening drama movies of Bollywood. This movie is a story about a child, Ishaan, who is having the problem of dyslexia but is unaware of it and therefore is unable to score good marks in academics. His fed-up parents send him to a boarding school, where he meets his new Art and Crafts teacher, who discovers that Ishaan has the problem of dyslexia, but he is very good in Arts. The story showcases how to overcome such problems with children and focus on the area of their talent, not our expectations.

This movie goes back to the historic period of Mughals, where the prince “Salim”, falls in love with a beautiful courtesan named “Anarkali”. Both decide to be together with each other forever but Salim’s father, The Emperor, decides to break them up to maintain their royal image. After knowing his father’s intentions to kill Anarkali, Salim turns rebel against his father and stands for his love. The movie is a love drama about the barriers of society.

It is a story of two young birds “Raj” and “Simran” who meet on a trip across Europe and later fall in love with each other. Simran belongs to a conservative family and the groom has already been selected for her by his father. After knowing this, Raj follows Simran to India and tries to convince her family that he is the suitable boy for her. This is one of the biggest hits of Shahrukh Khan and some people also consider it the best Romantic Bollywood movie ever.

The movie “Lagaan” is a story of a small village at the time of British rule, where villagers are burdened by the heavy taxes of the British Government and several years of drought completely break them up as they are unable to pay taxes for the last year also. Captain Russell offers them a deal to play a game of cricket, if they win, their taxes will be waive off and if they lose, they have to pay triple taxes. With no other option, a young villager name Bhuvan accepts the challenge and starts gathering and training his team for the match.

No.8. Pyaasa (Top 10 Best Bollywood Movies of All Time)

Pyaasa is a movie about a poor struggling poet who wants to publish his work but gets rejection every time. Failing to lead a successful career, he gets disowned by his family and his love also abandons him for the same reason. Fate leads him to Gulabo, a prostitute who falls in love with him and supports him in the ups and downs of his life. This movie is a classic and has also been listed in the top 100 best movies of all time by the  TIME Magazine.

No.9. Anand (Top 10 Best Bollywood Movies of All Time)

Anand is a touching movie about a cancer patient, who is trying to live his last days to the fullest. He shows a very positive approach towards his life even after diagnosed with such a fatal disease, which inspire his doctor to write a book on him. Anand submits to cancer in the end but teaches an important lesson to everyone about how we should approach our life despite the difficult situations.

The movie is an eye-opener and highlights the importance of living in the moment. The movie emphasizes the “do it now” attitude before it’s too late. This is a story of 3 friends, Arjun, Imraan, and Kabir, who go for a vacation in Spain for the Bachelor’s party of Kabir. All three, decide one adventure sport of their choice for all and they try to fight out their demons of fear. In the movie, each one is having some past and present problems individually and they try to solve them by understanding that “You Live Only Once”.

Q1. Which is the best Romantic Bollywood movie of all time?

Q2. Which Bollywood movie has the best dialogs?

Ans. “Sholay” is the Bollywood movie with the best dialogs.

Published in A to Z, Country, Entertainment, News and Social