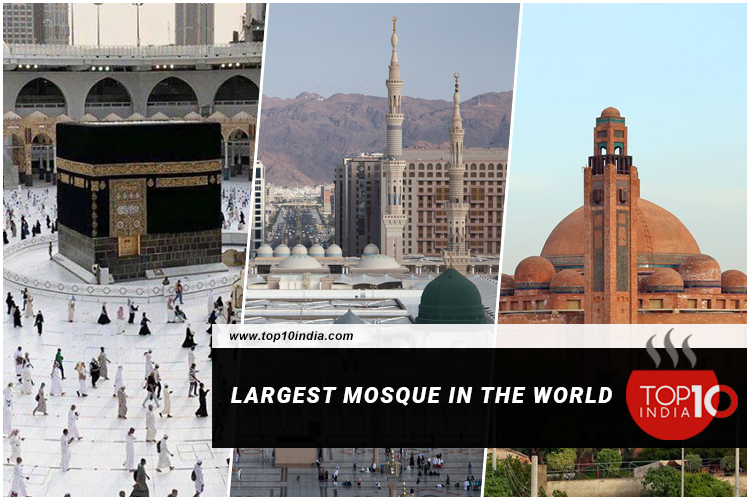 Largest Mosque In The World: The whole world is full of heritage and pilgrimage places. People visit these places to pray to God. These places have some very different and positive vibes because of their holiness.

Largest Mosque In The World

Mosques are the place where Muslim people visit to pray or worship. Mosques are pilgrimage places for Muslim people. Here is the list of the largest mosques in the world. In this article, you will also get to know about the area of the mosque and the capacity of holding worshippers in it.

Masjid al-Haram ranks at the first position in the list of the largest mosque in the world. This mosque surrounds the Kabba in Mecca, in the Makkah Province of Saudi Arabia. It is a site of pilgrimage in the Hajj, that every Muslim wish to do once in their lives. This mosque also involves some notable sites such as – Black Stone, the Zamzam Well, Maqam Ibrahim, and the hills of Safa and Marwa. This mosque has gone through many renovations and expansions over several years. This mosque is known as the Great Mosque of Mecca. It is the largest mosque in the world and the 8th largest building in the world.

Al-Masjid an-Nabawi is a mosque built by the Islamic Prophet Muhammad in Medina, in the AI Madinah Province of Saudi Arabia. The land of this mosque belongs to two young orphans Sahl and Suhayl. When they know that Muhammad wants to acquire that land to construct a mosque, they offered the land to him as a gift. This mosque is situated on a rectangular plot and is divided into two stories. It has a flat paved roof topped with 27 sliding domes on square bases.

Imam Ali Shrine is one of the most popular mosques in the world. Shia Muslims believe that this mosque contains the tomb of Ali ibn Abi Talib, cousin of Muhammad who later became his son-in-law. The first structure over the tomb of Ali was built by Abassid Caliph Harun al-Rashid in 786. After this, it was renovated and expanded by many dynasties. There are 3 entrances to the mosque – eastern – Main or Clock Portal, northern – al-Tusi portal, and southern – Qibla portal.

Imam Reza Shrine is a complex that contains the tomb of Imam Reza. This complex also consists of a Goharshad mosque, a museum, a library, four seminaries, a cemetery, the Razavi University of Islamic Science, a dining hall for pilgrims, vast prayer halls, and more buildings. It is managed by Astan Quds Razavi Foundation and is headed by Ahmad Marvi. This mosque is made in Abbasid Islamic style.

Istiqlal Mosque is the largest mosque in Southeast Asia. This mosque was opened to the public on 22nd February 1978. The architect of this mosque was Friedrich Silaban. The architecture style of this mosque is New Formalise. The mosque consists of 7 entrances, and all seven gates are named after Al-Asmaul-Husna. The wudu fountains are located on the ground floor. The main prayer hall and the main courtyard are on the first floor. The mosque consists of two rectangular connected buildings – the main structure, and the smaller secondary structure.

Taj-ul-Masajid is the largest mosque in India. The construction of this mosque was started by Nawab Shah Jahan Begum of Bhopal. After her death, it was completed by her daughter. The structure of this mosque was planned in the middle of three water bodies – Munshi Hussain Talaab, Noor Mahal Talaab, and Motia Talaab. The floor of the mosque is made of marble and a large Ablution tank is located at the center of the courtyard. The mosque consists of 3 domes. The construction style of the mosque is Indo-Islamic and Mughal architecture.

Jamkaran Mosque is one of the largest and most popular mosques in the world. This place is considered a sacred place from 373 A.H, 17th Of Ramadan. Tuesday nights are very popular at this mosque. More than a hundred thousand pilgrims outside the mosque for Maghrib Prayer. Both men and women separately pray there and also have separate wells. The mosque kitchens also provide a free evening meal for thousands of poor people. The architecture of this mosque is in Islamic style. Over 15 million pilgrims visit this mosque every year on the birth anniversary of the 12th Imam in Mid-Sha’ban.

Djamaa el Dajazair is one of the largest mosques in the world. The architect of this mosque was China State Construction Engineering. The mosque was designed by German architects KSP Juergen Engel Architekten and engineers Krebs und Kiefer International. This complex also consists of a Quran school, a park, a library, a staff housing area, a fire station, a museum of Islamic art, and a research center on the history of Algeria.

Which is the largest mosque in the world.

Masjid al-Haram is the largest mosque in the world.

Is Jama Masjid the largest mosque?

Jama Masjid is one of the largest mosques in India.

Published in A to Z, News, Others and Social