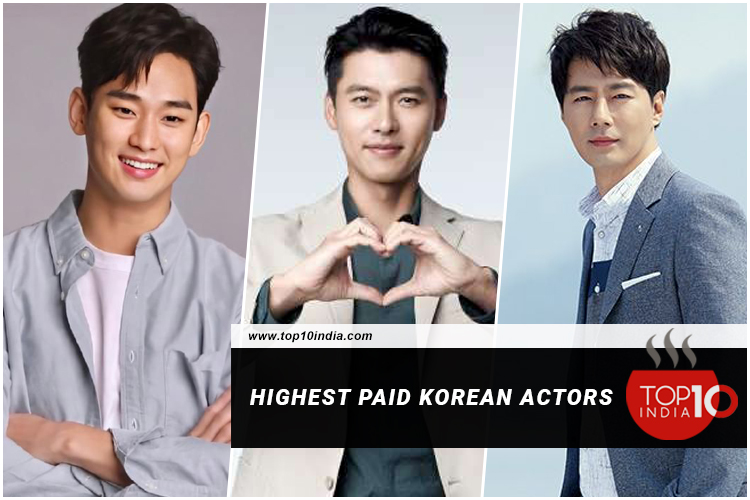 Highest Paid Korean Actors: Korean actors are those actors who work in Korean Industries. In the whole world, Korean Dramas and Movies are getting more popular. Korean Actors are getting love from different countries because of their talent and good looks.

In the article, we are sharing information about the highest-paid Korean actors. These actors have become soo famous that they are getting a large amount for dramas and movies. You will get to know about the per episode salary of your favorite Korean Actor.

Kim Soo-Hyun ranks at the first position in the list of highest-paid Korean actors. His mother encouraged him to join acting classes to overpower his shy and introverted personality. In 2009, he studied at Chung-Ang University’s Film and Theater Department. He made his acting debut with a supporting role in a family sitcom Kimchi Cheese Smile. In 2008, she performed in a lead role in a youth drama Jungle Fish. After this, he was seen in the food-based variety show Delicious Quiz. He made his movie debut with the movie The Thieves. He is also regarded as the ‘King of product endorsements’ by the media. He has won several awards for his acting in movies and dramas. Some of them are- APAN Star Awards, Asia Artist Awards, Asia Model Awards, Baeksang Arts Awards, Bule Dragon Fil awards, and more.

Hyun Bin is a very amazing South Korean actor. He made his acting debut in 2003 with the television drama Bodyguard. In the same year, he made his movie debut with the sports movie Spin Kick. He became a known personality after performing in a romantic comedy series My Lovely Sam Soon. This drama was one of the highest-rated Korean Dramas of All Time. In 2013, he only shot for commercials as the high-demand endorser. In 2013, he received the President’s award at the 50th Savings Day held by the Financial Services Committee. In 2020, he was honored as Presidental Commendation in South Korea. In 2021, he was ranked 21st in the list of Korea Power Celebrity by Forbes.

Jo In-Sung is a very known South Korean actor. He studied modeling and events management at Chunnam Techno University. After this, he studied Theater and Film major at Dongguk University but he was dismissed from there because of short attendance. He made his debut as a model for the clothing brand Ziozia. He made his acting debut in 1999 with an MBC Sitcom Jump. He was cast as a lead role in 2002 in the drama Shoot for the Stars. In 2016, he was made the ambassador of the National Tax Service. He has won several awards for his acting in movies and dramas. Some of them are- 14th KBS Drama Awards, 10th SBS Drama Awards, 41st Baeksang Arts Awards, 12th Busan International Film Festival.

So Ji-Sub is a very popular and successful South Korean Actor. He started his career as a model for the jeans brand STORM. He made his acting debut with the sitcom Three Guys and Three Girls. He became a known personality when he worked in a second lead role in Glass Slippers. He played his first lead role in the time travel historical drama Thousand Years Of Love. In 2012, he released his first EP Corona Borealis, collaborating with songwriter Kim Kun-woo, vocal trainer Mellow, Soprano, Han Kyung-mi, and singers Huh Gak, and Bobby Kim. He was made the goodwill ambassador of Gangwon Province.

Lee Min-Ho is a very popular South Korean actor, singer, and model. In his childhood, he wanted to become a professional football player. But he quit this idea because of his injury in 5th grade. He studied majors in Film & Art at Konkuk University. He made his official acting debut with an EBS series Secret Campus. In 2006, he faced a very major car accident, for which he was hospitalized for many months. He made his comeback with a school drama Mackerel Run. He gained popularity after working in the drama Boys Over Flowers. He was made the Honorary Ambassador for the King Sejong Institute Foundation (KSIF). He has won 41 awards out of 78 nominations.

Lee Seung-gi is one of the most successful South Korean actors. He is also an amazing singer and host. He studied International Trade and Commerce at Dongguk University. He was trained for two years by singer Lee Sun-Hee before his debut song. He made his debut with the song Because You’re My Girl from his first album The Dream of a Moth. In 2006, he made his official acting debut in KBS’s drama The Infamous Chil Sisters. In 2015, he made his film debut with romantic comedy Love Forecast. His success in singing, acting and hosting earned him the title Triple Threat entertainer. He has won 63 awards out of 83 nominations. In 2021, he was ranked 30th in the list of Korea Power celebrities by Forbes.

Yoo Ah-In is an amazing South Korean actor. He studied at Dankuk University and Konkuk University and completed a GED for high school certification. He made his debut with a TV commercial. After this, he performed in a series Sharp. He took a break from the acting because he was confused that what is true desires. He made his comeback with the film Boys of Tomorrow. He became a known personality after working in a fusion period drama Sungkyunkwan Scandal. He is also considered an outspoken and politically socially charged Korean actor. He has also appeared in advertising campaigns for international brands- Diesel, Absolut Vodka, Burberry, Calvin Klien, and more. In 2021, he was awarded 41st Blue Dragon Film Awards.

Lee Jong Suk is a very fabulous South Korean actor and model. He studied Professional Motion Pictures and Art at Konkuk University. At the age of 15, he started his modeling career at the Seoul Collection walkway. He made his official acting debut in the South Korean TV series Prosecutor Princess. After this he made his movie debut with the horror movie Ghost. He gained some stardom by his supporting role in the hit drama Secret Drama. He has won several awards for his acting in movies and dramas. Some of them are- SMART Model Contest, 6th Korean Drama Awards, 21st Korean Culture, and Entertainment Awards, 2nd APAN Star Awards, and more.

Song Joong-Ki is a very known South Korean actor. He was first seen in a TV show as a contestant on KBZ’s Quiz Korea. After this, he became a cover model for the university magazine College. In 2008, he made his acting debut with the movie A Frozen Flower. In 2009, he became a regular host of KBS Friday Music Show Music Bank. He became a known personality after his role in the fusion historical drama Sungkyunkwan Scandal. He was made the Korean Tourism Honorary Ambassador by the Korean Tourism Organization. From 2017 to 2020, he was titled the honorary ambassador for Incheon International Airport. In 2021. he was awarded the Brand Customer Loyalty Award.

Ji Chang-Wook is a very amazing South Korean Actor and singer. He made his on-screen debut in a minor role with the film Days in 2006. He officially made his debut with the movie Sleeping Beauty. In 2010, he got a lead role in the drama Smile Again. He became a known personality after working in the historical drama Empress Ki. He has also performed in music videos such as – We Broke Up Today, Cry Cry, Its Over, Runaway, and more. In 2019, he was awarded the 4th Asian Artists Awards.

Who is the highest-paying Korean actor?

Who are the highest-paid Korean Actors?

In the above article, you can check out the highest-paid Korean actors.

Published in A to Z, Country, Entertainment, News, Personality and Social