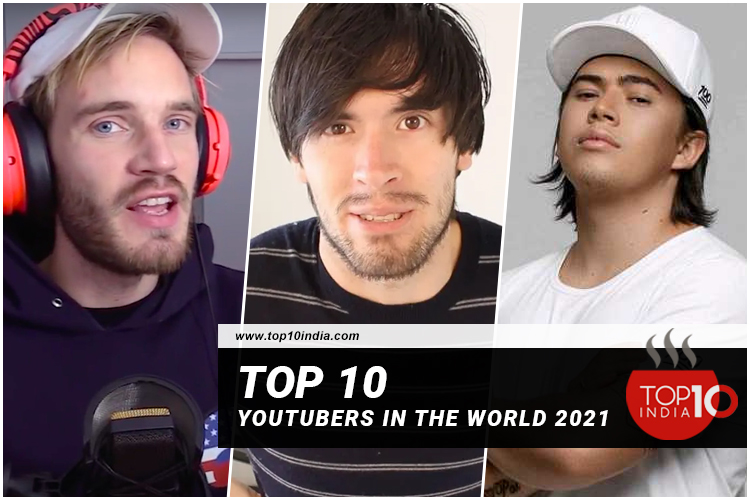 Top 10 YouTubers In The World 2021: YouTube has become a favorite platform for everyone to pass their time, all of us have an account in it, and with the availability of unlimited networks, we, too, have been following many different channels and YouTubers who keep us entertained. Have you ever wondered who among them is most followed and deserves to be in the top 10? So, we are here to answer your questions and at the same time give you a glimpse of their work in this article.

PewDiePie, whose real name is Felix Kjellberg, tops our list in this category. He is a popular YouTuber worldwide and started his YouTube career from his college room, then dropped and used to sell hotdogs for a living. But now, he has become the most subscribed YouTuber in the world with 110M subscribers, primarily known for his live-action video games and hilarious comedic timing. He has been earning around 20 to 50 million dollars with content on YouTube. So, if you are a gamer or looking for some satirical comedy content, then this is the account that you should definitely follow.

HolaSoyGerman is a Chilean YouTuber, entertainer, vlogger, and comedian. He started to gain a huge following from standing and talking about everyday and unusual topics in a quirky and relatable manner. Most of his viewers are from Spain, and for people from other nationalities, his videos are subtitled into various other languages. People like him for his personality and funny portrayal of different topics. Besides that, he is in a band and has a music channel called Ancud. He has been more active on his JuegaGerman channel, where he posts most of his hilarious videos.

Whindersson Nunes is a Brazilian YouTuber and stands at third position with 42.4 Million Subscribers giving a tight competition to HolaSoyGerman. He portrays day-to-day life topics in a very humorous way.  According to a survey released by Google, he is the second most influential Brazilian personality among 14 to 17-year-olds in Brazil, behind Luccas Neto. Apart from that, he is well known for his music, comedy parodies, and movie reviews that he constantly updates on his YouTube channel.

Felipe Neto is a Portuguese-Brazilian manager, vlogger, actor, and an amazing writer. He is also the founder of “Paramaker” a Youtube business network currently managing around 5000 channels sold to a French Media company. His unique style of vlogging and collaboration with other celebrities has garnered many followers on his channel.

Luis Fernando Flores Alvarado, professionally known as Fernanfloo, with his same number of followers as Feli Neto, is in our fifth position. He is a Salvadoran gaming YouTuber, and at times he makes vlogs and sketches that are hilariously animated to entertain his audience. With his variety of content, the day is not far from surpassing Felipe Neto and other YouTubers.

Elrubius is a Spanish-Norwegian YouTube personality whose channel is majorly focused on making gameplays and comedic vlogs. In 2013, he made a music video that went viral, which helped him garner many subscribers in his YouTube channel. Aside from YouTube, he also has the fifth most re-tweeted post on Twitter with 1.42 million tweets, making him a YouTuber with the most re-tweeted tweet and currently enjoys as the most subscribed channel in Spain.

Luisito Comunica is a travel vlogger and posts his travel experiences on his YouTube channel. He is a Mexican YouTuber, businessman, blogger, and internet personality. He started his YouTube channel by uploading videos randomly interviewing people on the street. He has currently traveled worldwide in cities such as Paris, Venice, Dubai, Vegas, and many more. He mainly travels and compares cheap and expensive things he finds and reflects on the cultures of different countries that he has traveled to. So, if you like traveling and learning new things about different cities, his channel could be a nice place for you.

Lucas Neto, the brother of Felipe Neto, is at the eighth position on this list. He likes his brother as a vlogger and an actor with great comedic timing. He created children’s content in various video formats, becoming prominent in Brazil’s social media and parallelly. Both the brothers created a YouTube channel together and made a lot of content. But majorly, he garnered a lot of attention for the videos he made for children, which had educational content in a fun and entertaining way.

Samuel de Luque Batuecas, who is better known as VEGETTA777 online, is a Spanish YouTuber who is famous for uploading his gameplays such as  Minecraft, battlefield, etc., at his YouTube channel. He stands out from other YouTubers due to his different narrative style, making them like a movie. At present, he has the most subscribed channel in Spain with 32.3 Million subscribers, just below ElubriusOMG, which has 39.9 Million followers.

Rezendeevil is a Brazilian YouTuber known for his Minecraft videos and vlogs and stands at the tenth position in our Top 10 list. His videos mainly cover his acting spoofs and vlogging. In 2017, he created a channel exclusively for his gameplays and Minecraf games called “Rezendeevil Minecraf” and thereby stopped making his game videos on his main channel. Then, he used his main channel to create vlogs, challenges, and videos with his friends.

The names of YouTubers that we have shared here are based on the latest number of subscribers that they have. The dynamics change regularly, and numbers can go up and down, but their followers stay loyal to them as long as their content stays fresh and real. And each of these listed YouTubers possesses its own unique style and presentation, which have helped them garner so many followers. So, you can also go and have a look at their channel and explore their content.

Published in A to Z, Country, Personality and Social