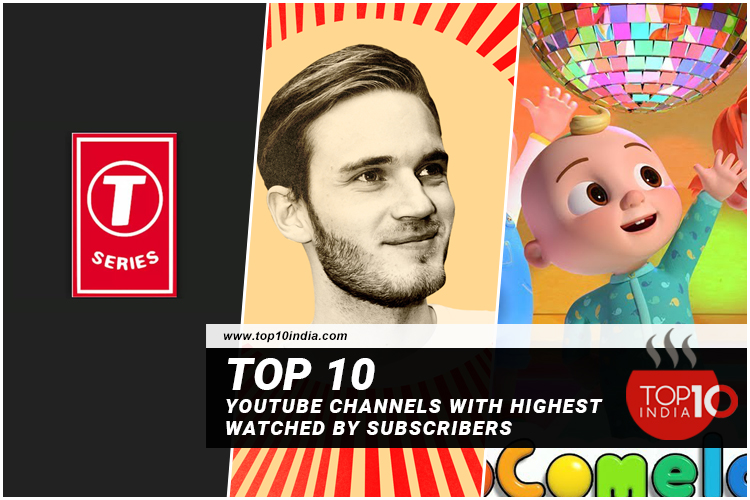 Top 10 YouTube Channels With Highest Watched By Subscribers: YouTube is getting popular day by day with its unlimited video streaming facilities. People are using this platform to share their views on different topics and are the second top search engine in the world. People have been accessing it to choose from a variety of channels and follow accordingly. These channels fall into different categories, including gaming, music, education, and many more. And some of them have millions of viewers who follow their content regularly. This increasing popularity has made YouTubers now one of the most sought-after professions in the world. Therefore, we will be sharing the list of the Top 10 YouTube Channels in the world based on the number of subscribers:

T-series is a music and film production company based out in India. They are the topmost subscribed channels globally and have been continuously uploading Bollywood music videos to its channel. They also have a multi-channel network producing 29 more channels, divided regionally, thereby accumulating 181M subscribers. India’s major population (around 500 million users) are internet users. The lack of local content makers has significantly worked in favor of the T-series, making it famous in India and worldwide.

PewDiePie is a Swedish YouTuber known for posting live video games and his humorous take on different topics. He began his channel by streaming video games on his channel, but then he changed his way and started experimenting with viral challenges, reviewing other YouTubers, and did some vlogging. His unique style of work and comedic timings made him a fan’s favorite. He started collaborating with other YouTubers to expand further, which helped him gain a whopping 110M subscribers.

Cocomelon is an American YouTube channel made exclusively for kids and is the third- most viewed and subscribed by its followers. They provide 3D animation videos of both traditional nursery rhymes and their own original children’s songs. It’s a daily dose of entertainment as well as an educational platform for kids, where they can learn and at the same time have fun. Cocomelon’s videos include animals, adults and children interacting and singing with each other, and they live to stream it to engage with kids. Their fun and unique way of the interactive session makes them all parents’ favorite as they keep their children happy and busy.

Fact- It is the fourth most subscribed and third most viewed YouTube channel of all time.

WWE is an American professional wrestling entertainment company. Recently, they have launched themselves into other fields such as movies, football, and various other ventures. The majority of the videos that WWE features are the fan’s favorites from WWE superstars, and apart from that, they stream live shows, including RAW, Smackdown, etc. Its immense popularity and subsequent presence on YouTube largely contributed to increasing its followers and making it to the top 5.

Canal Kondzilla with its 73.6 Million followers is standing in our top 6 YouTubers. He is a Brazilian screenwriter and a renowned music producer. He owns KondZilla records and posts music records from his record label on his music channel. His pop music and behind-the-scenes video have gained him a lot of followers.

Like Nastya is a young Russian- American YouTuber based in the United States. She and her parents run several YouTube channels that focus on running shows for little children and post them in 7 different languages. Her channels make her the biggest children’s YouTuber globally and the third highest-paid YouTuber in the world. Her content and popularity have made her in our top 10 list.

Zee Music company stands at eighth position in our top 10 list with 72.4 Million followers. It is an Indian music company and is the largest producer of Hindi music with over 22000 hours of television content and around 3818  movie titles. It has a tough competition with its Indian rival, T-series, and a long way to reach the top.

5- Minute crafts launched in 2016 has created more than 5000 videos that feature various fun DIY projects, life hacks, and crafts for people. They focus on creating fun content and keep their viewers engaged with their DIY videos. It is the 9th most subscribed channel on this platform. Their videos usually comprise interactive sessions and teach them how to do something themselves. Besides that, they also do occasional science experiments to keep the viewers guessing.

Vlad and Niki is a YouTube channel featuring two brothers, Vladislav and Nikita Vashketov. They run 28 channels in around 18 languages. As of 7th May, their main channel has 67 million subscribers and over 48 billion views, placing them at the tenth position on our list. Their content is family-friendly, and usually, their theme focuses on togetherness and crazy adventures. Each episode is produced with a creative mix of animation, live-action, and nursery rhymes. They have expanded their channel internationally and even have their own games and apps to promote their brand worldwide.

We have given you the top 10 YouTubers based on the number of their subscribers. The content created by them is really unique, which is one reason people follow them daily. Even during the pandemic, they offered fun activities for children and entertainment shows for adults, which keep the kids distracted and adults stress-free. Apart from just entertainment, they also offer valuable content which is informational and creative. So, in case you don’t follow these YouTubers, have a look at the above list, and maybe you will find some entertaining channels to follow.

Published in A to Z, Brands, Entertainment and Social