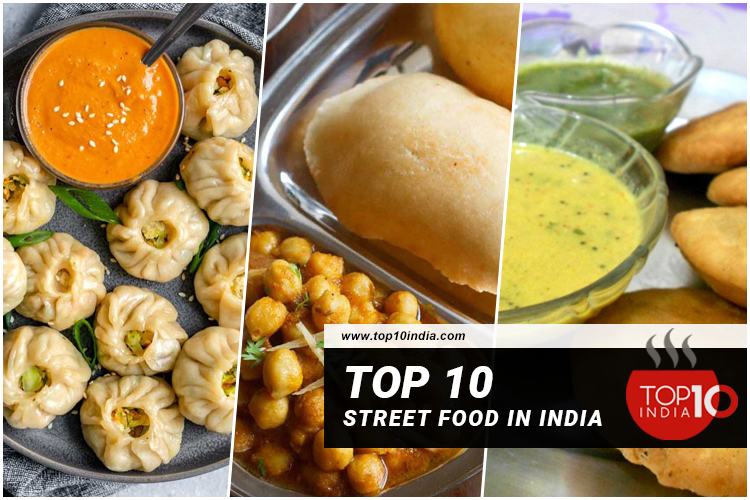 Top 10 Street Food in India:-Street food consists of ready-to-go meals sold by vendors, a hawker at every small and big restaurant. It is often sold by a portable food booth, food cart, or food truck. It is mainly eaten on the spot and generally found in the market or fair.

According to Food and Agriculture Organisation,2.5 billion people eat street food in which the majority are middle-income families. They rely on quick access and cheap street food service for daily nutrition and job opportunities, especially in developing countries. Today, people purchase street food for a hundred reasons. Some of them are reasonable prices, to try ethenic cuisine or for nostalgia.

Momo is east and South Asian steamed dumplings. It originated in the native states of Tibet, Nepal, Bhutan, Sikkim, and the Himalayan region of India. It is trendy and can be found in every kind of shop, from restaurants to the streets of Northern India, especially in Delhi.

Chole Bhature is also one of the most famous  Indian dish famous all over India. This chole stands for chickpeas. Taste and ingredients vary from one place to place, like the size and color of the chole. Also, the spiciness varies from one hand to another depending on the personal taste, but in general, they are spicy.

Region or states:- Delhi, Punjab, and either adjacent states.

Rajasthan kadhi is a special curd sauce that can be had plain or served with steamed basmati rice or cumin rice. It is also good for cough and cold due to its remedy nature, which helps cure many other nose problems. The best advantage is that it does not require any item which is not available at home easily.,

Created by:- Doondadi people of Rajasthan and U.P

Gol gappe or water balls is a type of snack that originated in South Asia. Also, one of the most common and famous street food is easily found in every village, city, town, and other places. It consists of hollow deep-fried ball-shaped puri filled with different variety of flavored water made of species. Commonly it is served with the sweet water of imli and mint water.

Region or states:-Mainly in the states of Delhi, Haryana, Uttar Pradesh, Punjab, and Madhya Pradesh

Serving Suggestion:- Best served with cold water with a different variety in flavors.

Mysore masala dosa is crisp and soft dosa spiced with red chutney. It is served with a potato dish and coconut chutney. They are crispy from the outside, which has porous bite and texture from the inside. They have a nice golden brown color too.

It is a Marathi dish full of nutrition elements. Moreover, it maintains the balance of the body with the ingredients present in the making of the dish. Vada is regularly used for people due to less making time and low cost of making and also it is good for human health.

Region or states:-Goa, Maharastra, and other neighboring states.

Makka is trendy street food, especially during the time of monsoon. It provides relief of heat during the cold atmosphere for a short time. Makka is straightforward to cook as it requires very few elements. It can be eaten by boiling or by roasting.

Serving Suggestion:- Best served during the time of monsoon.

Kathi roll is a famous street food that originated in the streets of Kolkata. It is said it is made for the Britishers for something easy and fast to cook. Kathi is like a kabab but with a modern taste and ingredients. Kathi roll is gaining popularity with the speedy growth of popularity because of different stuffings. Nowadays, it is famous in West Bengal and other states like Delhi and other developed states.

Created by:- Babuji of Englishmen of colonial India

Pav Bhaji is a famous street food mostly eaten n the streets of Mumbai. It was made mainly for the workers of cotton mills as fast lunch food. Now it gained so much popularity not in Mumbai but all over India. It is a food of vegetable [bhaji] eaten with bread or any roti.

Region or states:-All over India

Serving Suggestion:- Best served hot with butter on the Pav.

Aloo Tikki is street food from Northern India. It consisted of aloo, which is deep-fried and made up of many different spices as ingredients. Aloo Tikki is so famous as no wedding is complete without the presence of this food.

Region or states:- Delhi, Haryana, Rajasthan, and other neighboring states.

1.Which fast food is most popular in India?

Aloo Tikki is considered the most famous in India.

2.Which fast food sells most in India?

Momos sell most in India.

3.Which is the healthiest fast food in India?

Pav Bhaji is the healthiest fast food in India.

4.Which is the most loved fast food in India?

Gol Gappe is the most loved fast food in India.

Published in A to Z, Dining and Others