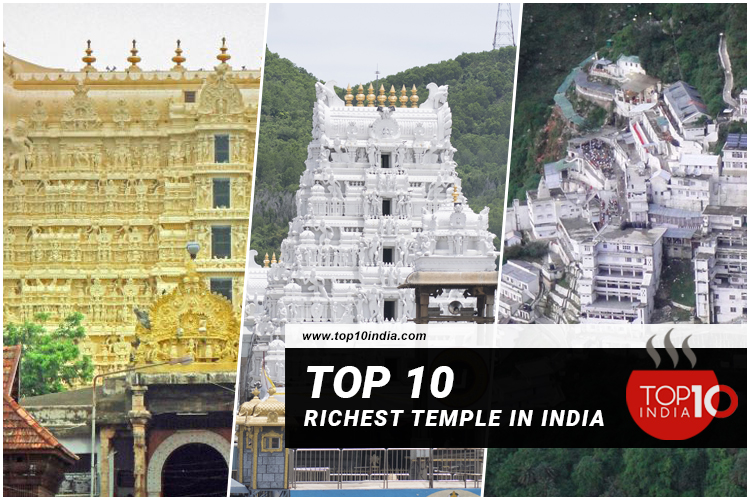 Top 10 Richest Temple In India: Sri Padmanabhaswamy Temple, Thiruvananthapuram is the richest temple in India, having a net worth of 1,20,000 Crores, is famous for its architectural design, and has a lot of wealth and jewels. India is a country of gods, temples, and beliefs. There are 330 million gods according to Hindu culture. All of them are worshipped in some or the other part of the country. There are different days, months, weeks designated to gods. Most of the temples run either on donations or previously acquired assets. Back when Kings were there in India, they used to make these temples worship their god and show their devotion toward the god they believed in.

The temples idolize the god inside the temple, but the sculptures and architectural design tell us the story about the construction of the god. Kings used to donate gold, silver, gems, and much more to these temples, and that same tradition is still followed. People also donate either valuable items like gold, cash, silver, gems or provide prasad (food or vegetables). Some people also devote their time. Here is our list of the Top 10 Richest Temple In India

Padmanabhaswamy temple is the richest temple in India. It is located in Thiruvananthapuram, and Lord Vishnu is worshipped over there. The temple is famous because of its Dravidian architectural style. The gold carving of Lord Vishu is around Rs 500 crores, and the temple includes multiple antiques like silver, gold, diamond ornaments, gold crowns, different gems like emerald and pearls.

Earlier, Tirumala Tirupati was the richest temple in India but, after new assets were found in Padmanabhaswamy, it becomes the second richest temple. The temple was built in the 10th century. Lord Venkateswara’s idol is worshiped in the temple, which is under the Ananda Nilaya Divya Vimana.

Vaishno Devi temple is the most famous temple in India, with around 8 million yatri visiting the place every year. There is a cafe situated at 5300 above the sea in which the Mutri of Mata Rani (Vaishnavi) recites. The believers either do tracking or use horses. There is also the availability of helicopter, which needs to be booked before visiting the Devi; most of the pilgrimage visits to Behro Baba mandir, which comes on the way while going back from the mandir.  The temple holds around 1.2 tonnes of gold, and the main income is generated through a donation in the form of cash, gold, etc.

Shirdi Sai Baba Temple is one of the most famous temples in India, believers from multiple religions visit there. Sai Baba lived his life in Shirdi and helped the people over there. A lot of people visiting Mumbai go to visit the temple. The temple has different chambers which contain valuable items like gold and silver.

The famous temple Sabarimala Ayyappa Temple, Kerala, idolizes Lord Ayyappa and only male pilgrimage. The person wanting to visit the temple needs to follow 41 days rituals. It is 3000 above sea level. The temples hold more than 3000 kg gold and earn mostly through its Prashanth. It is one of the richest temples in India.

Next from the list of the richest temple in India is Siddhivinayak. The temple idolizes Lord Ganesha, and there is a golden roof on top of where Ganesh murti is recited. It is believed in Hindu mythology that before starting any work, you should always take Ganesh Ji’s blessings.

Jagannath temple is the seventh richest temple of India on our list. It was built by Ananta Varman Chodaganga Deva. Lord Jagannath is worshiped in the temple; the lord is covered with 209 kgs of gold around the festival season. Jagannath is among the Char Dham Yatra which most of the Indian and International tourist does. There are different chidden chambers in the Jagannath Temple, which contain many precious gems, gold, silver.

Due to excessive gold and silver belonging in the Somnath Temple, Veraval, it was looted 17 times by Mahmud Ghazni starting from the 1025 century. Around 2 million dinars’ worth of gold and silver was looted. Pratishtha king Nag Bhatt II builds the temple.

The Meenakshi Temple, Madurai, comprises 33,000 sculptures of god (know as 33000 Devi, devta). It was built in the 6th century by Pandyan King. The temple idolizes the goddess Meenakshi. She is the wife of Lord Shiva (Sundareshwar). The temple has fourteen gopurams varying from 40-45 m. There are also golden vimanas in the temple.

Swaminarayan Akshardham is the most recently constructed temple in India. It was built in the year 2005. The temple is located in the National capital of India. The god which is idolized in the temple is Swaminarayan. His statue is made of pure gold. Believers and tourists visit the temple.

Meenakshi Temple Madurai is a rich temple in India.

Sri Padmanabhaswamy Temple, Thiruvananthapuram, is the number 1 temple in India.

3. Which temple has more gold?

Sri Padmanabhaswamy Temple, Thiruvananthapuram, is the richest temple in India.

Published in A to Z, Destination, Others and Social