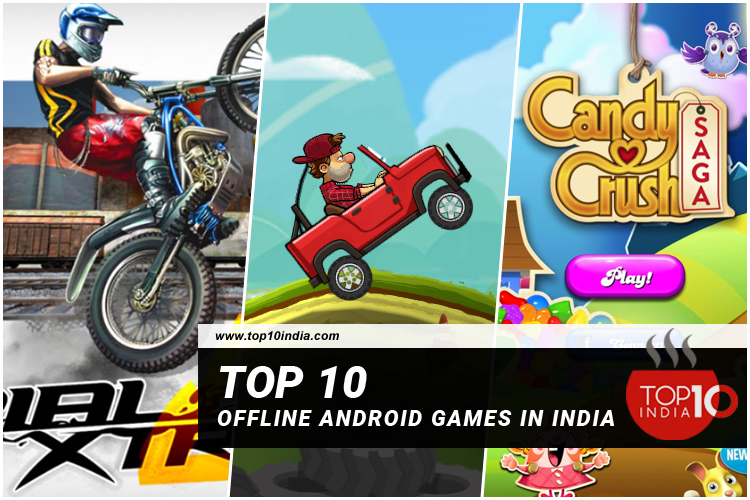 Top 10 Offline Android Games In India:- Android games have been such a rave in the past few years that they have quickly surpassed even gaming consoles concerning popularity. The continuous development of the smartphone sphere has made it possible for top game developers to hit google play with their best lot. But there is one drawback with play store that most of the game requires an internet connection to play it, but here, we are providing Top 10 offline games for android.

Here is the list of Top 10 offline games for android in India. This list presents the best games which can be played without any internet connection. Internet connection for games often affects the gaming experience and limits players in a country like India, where consistently finding an internet connection can be a task on its own. So, that’s why we have prepared this list.

Trial Xtreme 4 is a 2D racing game where you have to speed towards the finish line try not to fall off your bike on the way, which really won’t be easy given how complex the track is in this game. Trial Xtreme 4 moto Bike game in an iPhone and android game app. Today, it has gone through many interactions by the developers- Deemedya INC, with the latest current version being 2.9.7, officially released on 2021-04-21.

Hill Climb Racing is a 2012 2D physics-based racing video game released by the Finnish studio Fingersoft for Android, iOS, Microsoft Windows, and Windows phones. It was created by Toni Toni Fingerroos, Fingersoft’s founder, and is the company’s best-known product. The player controls a driver across hilly terrains, collecting coins along the way and spending them on vehicular upgrades while being watchful of the driver’s head and the vehicle’s fuel supply.

Candy Crush Saga is a free-to-play match-three puzzle video game released by King on April 12, 2012, for Facebook. Other versions for iOS, Android, Windows Phone, and Windows 10 followed. It is a variation of their browser game Candy Crush. In this game, players complete levels by swapping colored pieces of candy on a game board to make a match of three or more of the same color, eliminating those candies from the board and replacing them with new ones, which could potentially create further matches. Candy crush saga is considered one of the first and most successful uses of the Premium model.

Asphalt Nitro is a spin-off of the Asphalt series based on the 2013 rendition of Asphalt 8 Airborne exclusive android. Asphalt Nitro was officially released on May 13, 2015, with a huge overhaul over the beta version. Nitro boosts the player’s vehicle’s speed for a limited time. Asphalt Nitro is a compact game with a file size of 25 MB before installation and 110 MB. This should work brilliantly for users who have basic Android Smartphones with limited internal storage. Nitro refers to nitrous oxide, which racer sometimes pumps into their vehicle’s engine to their engine to produce more produce.

Bloons TD 6 is similar to many of its predecessors. You will have to set up towers along a road, and the challenge is to defeat the bad guys approaching you. The game comes with 20 maps, five levels of upgrades, heroes, and 19 towers with three upgrade paths. The player has multiple difficulties and a handful of different game modes to choose from. It was first released in June 2018 for iOS and Android. The game was ported to Microsoft windows in December 201,8 with macOS conversion,n later releasing in March 2020. Bloons TD 6 was developed and published by Ninja Kiwi.

This is one of the best offline games for Android phones. The player ends up on a planet with no way out. You will have to build the base and defeat the main bad guys. Crafting various items to get out makes the mission enjoyable and innovative. The humorous atmosphere keeps you light. It is an action-adventure role-playing video game developed and published by the Butterscotch Shenanigans. It was released on January 21, 2016, onto the App Store, Google Play.

Friday the 13th: Killer Puzzle is a horror puzzle game for iOS, Android, Steam, and Nintendo Switch developed by Blue Wizard Digital. It is released on January 20, 2018, in the USA and April 13, 2018, worldwide. It is the fourth official video game based on Friday the 13th: Killer puzzle. The game won the iOS App of the week on January 26, 2018. In this game, the player control Jason Voorhees by sliding him around an isometric puzzle to attack victims directly or indirectly, in “Kill Scenes.”

Temple Run is a 3D endless running video game developed and published by Imangi Studios. The player controls an explorer who has obtained an ancient relic and runs from a demonic monkey-like creature who is chasing him. The game was initially released for iOS devices on August 4, 2011, and later ported to the Android system and Window Phone 8. The game was a commercial success with positive reviews from critics.

Subway Surfers is an endless runner mobile game co-developed by Kiloo and SYBO Games, private companies based in Denmark. It is available on Android, iOS, Kindle, and Windows Phone platforms and uses the Unity Game Engine. Subway Surfers was released on 24 May 2012 with updates based on seasonal holidays. In 2017, It was the most downloaded game across the globe. The game starts by tapping the touchscreen while jake or any other character spray graffiti on a subway and then gets caught in the act by the inspector and his dog, who starts chasing the character.

This is an action RPG. You need to run around killing bad guys, do some magic, and explore some interesting dungeons and ruins. There is a storyline and a lot of loot to collect. You have a lot of things to do on the way. We can say this is one of the most successful RPGs on mobile phones for several reasons. It was developed by Dream Primer and published by MakingFun Inc. for Android, iOS, and Microsoft Windows 8,1 and 10 with future development expansions and updates.

Based on research and study, we have mentioned the Top 10 offline games for android in India. These games can be played offline and comes in the top 10 lists because their number of users is one crore plus. These games are most probably play on Android phones.

Published in A to Z, Game and Tech