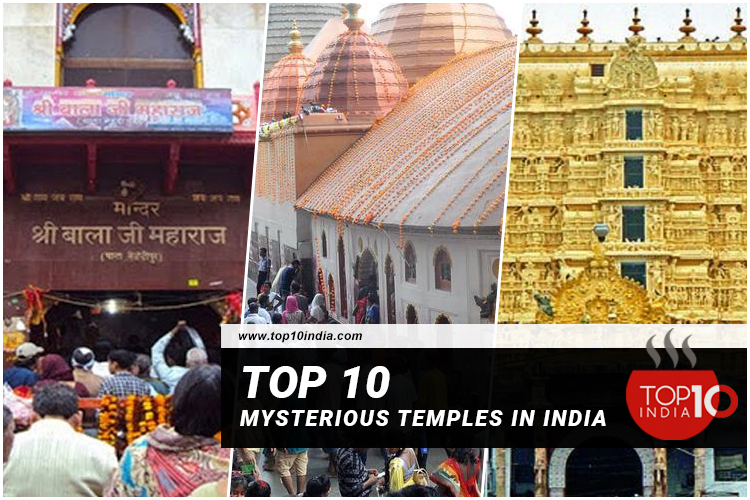 Top 10 Mysterious Temples In India: Mehandipur Balaji Temple, located in Rajasthan, is the number 1 mysterious temple in India. The priests still perform exorcisms to release people from bad spiritual performances. India is the land of many gods and goddesses, with a surplus of holy towns and sanctuaries, and spiritual gurus.

Some mysterious temples in India are famous for their unusual deities, some for their exorcism practices, and still others for being over 2000 years old. Here is the list of Top 10 Mysterious Temples in India that is beyond your imagination.

Imagine the temple being filled with the screams of possessed men and women. Mehandipur Balaji is an exceptional pilgrimage place in Rajasthan and one of India’s most well-known enigmatic temples. Exorcism is a technique used by a priest to rid a person of a negative spirit in any form.

Mysterious Things: The temple has no sculptures to adore, and the Goddess menstruates every monsoon.

Kamakhya Devi Temple in Guwahati is a fascinating temple in India that celebrates womanhood and menstruation since the Goddess of this temple bleeds every year during the monsoon.

Mysterious Things: Only devotees who follow the Hindu faith are permitted. People of different religions are not permitted due to the safeguarding of sacredness.

Mysterious Things: Devotees donate their hair to the gods to express their thanks for a more spiritually fulfilling life.

Dedicated To: Lord Venkateshwara, and manifestation of Lord Vishnu.

The ambiance of this mystical temple in Andra Pradesh’s Tirupati region defies description. That is why, on any given day, over 50,000 pilgrims gather to worship Lord Venkateshwara/Balaji/Vishnu. The admission procedure to Venkateshwara Temple is what makes it India’s most mysterious temple.

Mysterious Things: This is India’s sole temple where Lord Shiva can be seen smiling. Locals believe that Lord Shiva has a close connection to this temple and the entire city of Madurai.

Dedicated To: Meenakshi and Sundareswarar

Among the Top 10 Mysterious Temple In India, Meenakshi Amman Temple spans 14 acres in the heart of Madurai, is home to a mystery superpower that reigns in solitude.

Mysterious Things: Out of 70 massive pillars, one remains unbroken without any support, leaving a small gap at the bottom that prevents it from touching the earth.

Veerabhadra Temple in Andra Pradesh’s Lepakshi district, in the Top 10 Mysterious Temple In India, is a strange temple known for its one dangling pillar out of 70. Its building is in the Vijaynagar style, and its history dates back to the 16th century.

Mysterious Things: The temple is situated on a magnificently carved mountain with stunning artistry.

At the 16th century Ellora Caves, Kailasa Shrine is the greatest rock-cut Hindu temple. This temple will inspire you to learn more about Indian mythology than you ever have before. Kailasa Temple is a monolithic construction, meaning it is constructed from a single rock.

Mysterious Things: The Lingaraja Temple appears much larger than it is due to the optical illusion factor

Dedicated To: Lord Shiva as Linjaraja

Lingaraja Temple is the largest temple in Bhubaneshwar, with a 54-meter Mandir devoted to Lord Shiva, and is revered by Hindu worshippers with utmost faith.

Mysterious Things: Devotees enter the shrine after hurling insults at the Goddess.Dedicated to Goddess Bhadrakali

When you visit this temple in Kerala’s Thrissur district, a current of perplexity will run through your body. The Kodungallur Sree Kurumba Bhagavathy Shrine would wow you since people from their hamlet enter the temple after drinking as a rite.

Mysterious Things: Babia, a vegetarian crocodile, protects the shrine from danger. There hasn’t been a single example of human flesh-eating thus far!

Ananthapadmanabha Lake Temple in Kerala is the most powerful temple in India.

2. Which temple is mysterious?

3. Which is the most dangerous temple in India?

Veerabhadra Temple in Andra Pradesh’s Lepakshi district is the most dangerous temple in India.

4. Which God is most powerful?

Well, all the gods are powerful.

Published in A to Z, Destination and Others