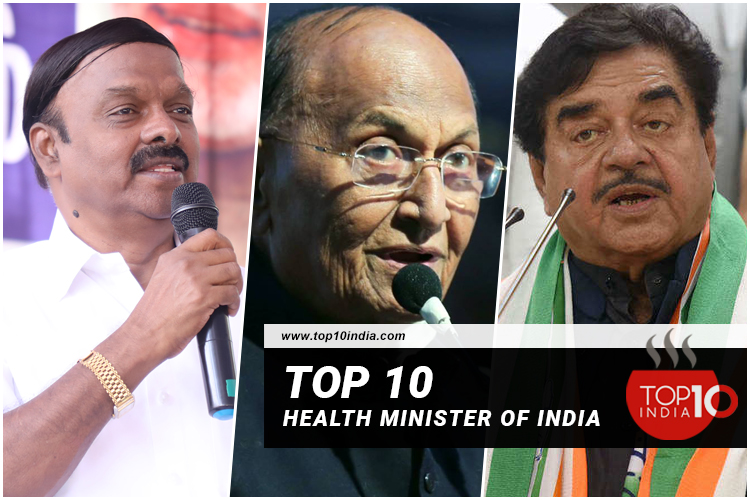 Top 10 Health Minister of India: The minister of Health and Family Welfare is an Indian Government ministry charged with health policy in India. This is also responsible for all government programs relating to family planning in India. It also holds the rank of a member of the council of Ministers.

(13 May 1999-27 MAY 2000)   He is an Indian politician and former ministry of state for food processing industries. He was elected to the Lok sabha from the Vellore constituency as a partial makkal katchi candidate in the 1998 and 1999 elections. He also provided the facilities to the villagers and worked to improve the rural economy, health, employment, and self-help training. He also associated with the road blockade agitation for seven days in 1987 for seeking the 20 %reservation in the education and government jobs for the backward classes in Tamil Nadu.  Father’s Name: Shri N. Thanji

Chandreshwar Prasad “CP” Thakur is a former member of the Rajya Sabha and the former minister in the government of India. He is also a physician and also a member of the Bharatiya Janata Party. He also ruled in the ministry from 1999-2004 in the BJP government. He is also the first medical scientist to receive a lifetime achievement award from the World Health Organization . he was also elected to Lok Sabha from the PATNA constituency in 1984. he has also published more than 100 research papers in medical journals and more than 200 articles in the press.

He is an Indian film actor and as well as politician. He was a member of Lok sabha  ( 2009-2014, 2014-2019) from Patna. He was a union cabinet minister of health and family welfare and shipping in the Atal Bihari Vajpayee government. And he was also a member of the standing committee on transport, tourism, and culture member of a consultative committee in the ministry of overseas Indian affairs from 2014-2019—his biography Anything but Khamosh in 2016.

She was an Indian politician and also a supreme court lawyer. She is also a senior leader of the Bharatiya Janata Party. She served as the minister of external affairs of India in the first Narendra Modi government. She was also the second woman to hold the office after Indira Gandhi. Swaraj was elected seven times as a member of parliament and three times as a member of the legislative assembly. She became the youngest cabinet minister of the Indian state of Haryana at the age of 25 in 1977.

He is an Indian politician from Tamil Nadu and a member of Rajya Sabha in the 2004 upper house of the parliament of India Tamil Nadu. He was the minister of health and family welfare in the first Manmohan Singh ministry as part of the UPA government. Anbumani was elected to the Lok Sabha, the lower house of the parliament of India from Tamil Nadu, and the youth wing of the Pattali Makkal Katchi and founded by his father.

She is an Indian politician and former union minister of state for health and family welfare and the union minister of state for textile. Represents the Bapatla constituency of Andhra Pradesh and a member of the Indian national congress with Andhra Pradesh. Right now, she is part of the Telugu Desam Party. He is ranked in the fifth position in the list of top 10 health ministers of India.

He was an Indian politician of the national congress, and also he was the 7th chief minister of Jammu and Kashmir from the year 2005 to 2008. He was the minister of health and family welfare. Ghulam Nabi Azad served as the leader of opposition in the Rajya Sabha until 2021 February.

He is an Indian otorhinolaryngologist and also the minister of health and family welfare, minister of science and technology, minister of earth sciences in the government of prime minister Narendra Modi. And also represents Chandni Chowk in Delhi as a member of parliament in the 17th Lok sabha. Harsh Vardhan was elected to the office of the chairperson of the executive board of the World Health Organization from May 22, 2020.

He is an Indian politician and lawyer who serves as the Bharatiya Janata Party president from 20 January 2020. Nadda was the BJP’s working president from June 2019 to January 2020.he is also addressing the commonwealth ministers in GENEVA in 2015. Earlier, he was a minister in Himachal Pradesh Government.

She was an Indian activist and as well as a politician. She was appointed the first health minister of India in 1947, and she remained until 1957. after India’s independence, Amrit Kaur became a part of the Jawaharlal Nehru’s first cabinet, and also, she was the first woman to hold cabinet rank, serving for ten years. Kaur was also a member of the Indian constituent assembly, the body that framed India’s constitution.

INCUMBENT, Currently he is the health minister of India, and he assumed office under the prime minister and was preceded by Jagat Prakash Nadda.

Q- Who is the best health minister in India?

Q- What technology has been used in the development of the currently available two vaccines in India?

Q- Which political party has the top-rated health minister of India?

A- Bharatiya Janta Party has the most top-rated health ministers in India.

Published in A to Z, General knowledge, News, Personality and Social