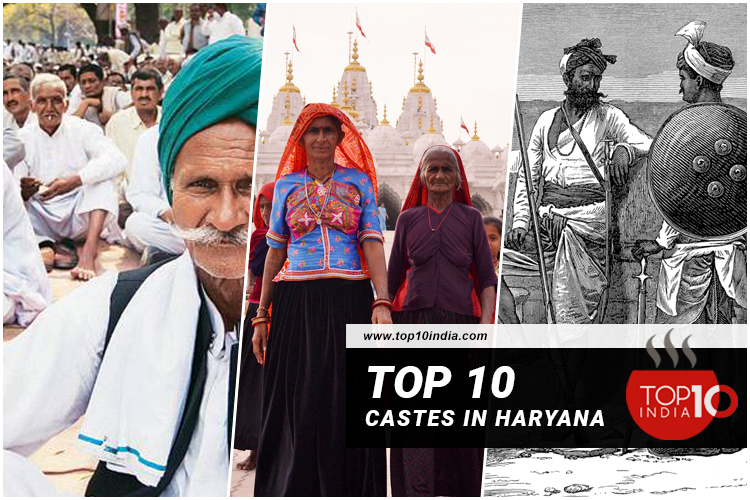 Haryana is divided into several castes such as Jats, Brahmins, Rajputs, Ahirs, Gurjars, Aggarwal’s, Arora Khatris Sainis, and Rors. There are also some Artistic castes like Telis(oil traders), Sunars(goldsmiths), Lohars(blacksmiths), dhobis(launderers), and nais(barbers) that may found throughout in states but especially in villages. Haryana believes in the Brotherhood of 36 biradaris.

Today we will talk about the top 10 Castes in Haryana that make a population of around 2,53,53,081 in Haryana state. Let’s have a look:

The Jats hold the highest Haryana population with approximately 20% – 25%. In Haryana, 70% population depends upon agriculture for their livelihood. Jats are the agriculture-based largest Farmer community in Haryana. Some claim that they are their ancestors came from Malwa and Bikaner region near the ancient Hastinapur. There are 12 main and chief Gotras like Malik, Dahiya, Ahlawat, Rathi, Dalal, Sehrawat, Jakhar, Kataria, Kadian, Gulia, Sheoran, Deshwal and 137 minor gotras. They are predominantly populated in the districts of Hisar, Karnal, Jhajjar, and also in Ambala. They come under OBC reservation by the Central government of India. Sir Chotu Ram, Chaudhary Maru Ram Rathee, Chaudhary Devi Lal, Chaudhary Chandgi Ram Atta [freedom fighter], etc., are some of the popular Jats in Haryana.

Yadav or Ahirs are present in and around India, but Ahirs hold a large population in Haryana with approximately 12% – 15%. This is a dominant caste mostly present in South Haryana as the Ahirwal or Yadav or Ahir. They claim they’re the earliest caste known as Abhiras from the Mahabharat time in Haryana. In Haryana, most of the Yadav/Ahir are found in Rewari, Narnaul, and some regions of Mahendragarh. They come under OBC reservation by the Central government of India. Rao Tularam was the popular Ahir leader who fought against the Britishers in the year 1857.

Rajputs are the most prosperous and respectable citizens in Haryana. Rajputs are present in and around India and hold a large population in Haryana with approximately 8% – 10%. They are the ancestry of the brave warriors in the history of India. They claim that they formed an important class of feudal in Haryana. In Haryana, most of the Rajputs are found in Ferozepur, Palwal, Karnal, and some regions of Panipat and Gurgaon. Chauhan, Raghav, Singh, Rana, Thakur, and Mandhars are some principal Clans in Haryana.

Brahmans and Pandits are the most prosperous and respectable citizens in Haryana. Brahmans are the most important caste present in and around India and hold a large population in Haryana with approximately 7% – 9%. They are mostly the Gaur Brahmans in Haryana. There are also some common gotras of brahmans like Sarsut, Bhardwaj, Vasistha, Kaushik, etc., in Haryana. Most of the brahmans of Haryana left the priest profession and started Farming. Tyagis and Tagas are one of them. Popular folk singer Pandit Lakhmi Chand also belongs to Haryana and is also known as Surya Kavi of Haryana.

Gurjars are the agricultural and pastoral community in and around some regions in India. They are mostly involved in agriculture, milk dairy, and livestock farming and hold the population in Haryana with approx. 5% – 8%. Gurjars speak their own language, known as the gujari. In India, they are mainly found in Haryana, UP, Rajasthan, Madhya Pradesh, and some regions of Punjab, Gujarat, and Maharashtra. They are present in some villages of Panipat, Gurgaon, Pataudi, Kurukshetra.

Meo-Muslim belongs to the Muslim Rajput community with a population of more than 1 million in India. Meo-Muslims are mainly living in southern Haryana. They hold a population of approx. 9% – 10% in Haryana, which is present in the Mewat region between Delhi, Agra, and Jaipur. They lived in Mewat for over 1000 years, and 1 out 10 Meo can read and write properly. Mewat region is adjacent to some regions of Gurgaon, Palwal, and Faridabad.

Sikhism is the fourth largest population in India, with 1.7% of the total population in India and popularly known as Punjabis. The Majority of Sikhs exist in Punjab, India. They are the agriculture-based largest Farmer community in Punjab and some regions in Haryana. They hold a population of about 6% – 9% in Haryana. In Haryana, most of the Sikhs are found in Ferozepur, Panipat, Ambala, Sirsa, Karnal, and some regions of Gurgaon & Ambala.

Baniya community belongs to the community that practices trading for their livelihood. They are the chief trading class in Haryana from ancient times. They are the most important caste in and around India and hold a population of approximately 5% – 7% in Haryana. The Baniya are They play a vital role in both business and Politics. Baniyas are divided into three main classes in Haryana, i.e., the Aggarwal, the oswals, the Guptas, and the Maheshwari’s. They confine themselves to the local market and local trade.

Sainis are present in and around India but hold a large population in Haryana with approximately 5% – 6%. This caste is mostly present in Haryana, traditionally landowners, farmers, and malis, but now they are seen as lawyers, civil servants, engineers, doctors, and much more. They claim they’re the King Shurasena, related to the ancient Shoorsaini clan, in Haryana. They profess in both Hinduism and Sikhism. In Haryana, most of the sainis are found in the region of Rohtak, Narnaul, Jind, and some regions of Hisar & Ambala. They come under OBC reservation by the Central government of India.

Last but not least, Harijans cover around one-fifth population in the state. Harijans are also known as Dalits. These castes are present in and around India in large number and hold the population of approximately 18% – 20% in Haryana. They come under the SC/ST category (Schedule Caste/Tribe)  reservation by the Central government of India. The chamars, chhuras, dhanaks, julahas, and bhangis are some categories under Harijans. Nowadays, these Harijans are in the higher positions of the legislature, minister, government officials, and traders. B.R. Ambedkar(Father of Indian Constitution) and Ram Nath Kovind(former president) are also Harijans/Dalits.

Based on research & analysis, here is a list of the top 10 castes in Haryana. We classified these castes based on their population according to the record of the Haryana Government and based on the category reservation by Central Government.

Please stay Connected with us for Further Updates.

Published in A to Z and Others