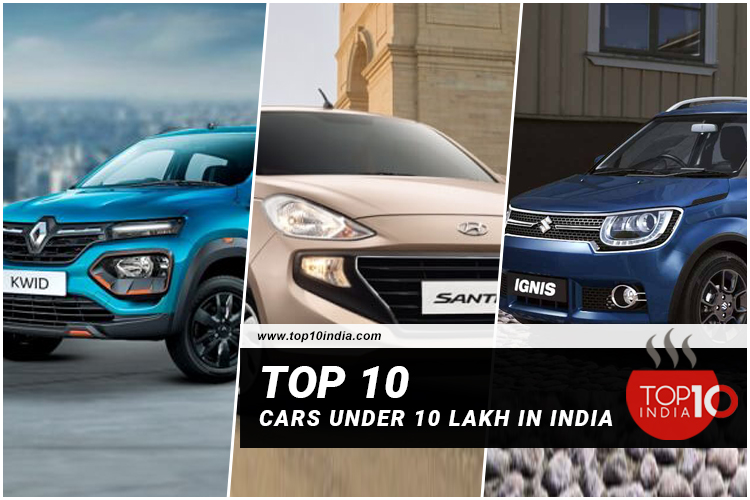 Top 10 Cars Under 10 Lakh In India: The Renault Kwid is the number 1 car under 10 lakh in India that stands at the lowest price in this list and is affordable for every customer. Cars have been quite popular in India throughout the previous decade. New automobiles are often developed and introduced. The technology employed in automobiles has also dramatically altered. In addition, buyers are increasingly aware of their vehicle’s characteristics and features. As far cars are concerned, they are available in the different price range for you to buy as per your budget.

The Renault Kwid is a popular entry-level crossover that a French manufacturer in India makes. This car was initially launched in the year 2015 in the Indian market. The price of Renault Kwid is 3.31 lakh Rupees.

Renault Kwid was designed by an engineering team in India and is a joint project between Nissan and Renault. The car is available with petrol engines with eight variants. There are also six colours to choose from. The car comes with a choice of automatic or a manual gearbox.

The current generation Santro is a compact five-seater hatchback that comes in petrol and CNG options. The car is on sale in six different variants, which offer different features. The car also comes equipped with Anti-Lock Brake System and Electronic Brake-force distribution.

The Renault Triber is a popular compact multi-purpose vehicle that a French manufacturer in India sells. This car was introduced by Renault India in June 2019 and went on sale in August of the same year. Renault Triber price is 5.48 lakh rupees.

Renault Triber is also available in four different variants and five different colour options. In addition, the car is available in manual and automatic gearbox options, which return a claimed fuel economy of 19 and 18.29 kilometers per liters, respectively. The car also comes with a huge boot space for carrying all your stuff.

The Nissan Magnite was officially launched in India on 2nd December 2020. It comes with an option of automatic and manual gearboxes with a petrol engine option. In addition, the car comes loaded with a host of features like hill start assist, keyless entry, and tire pressure monitoring system.

The Hyundai Aura is a popular subcompact sedan that is based on the popular hatchback Hyundai i10. The car was built specifically for the Indian market and was meant as a replacement for Hyundai Xcent. The price of Hyundai Aura is 5.98 Lakh rupees.

The car comes with a single diesel engine option and two petrol engines, one of which is turbocharged. The car is also equipped with LED headlamps and projectors at the front, and the tail lamps get the LED treatment. This is a perfect car for cities with huge traffic jams and less parking space due to its compact size.

With the launch of this car, Honda Amaze also launched its first diesel engine in India. It is currently available in petrol and diesel engine options and has four variants. In addition, the car is available in five different colors. This is one of the most value for money compact sedans on sale in India.

Ford Aspire comes with a diesel and petrol engine option which is mated to a manual gearbox. The cost of Ford Aspire is 6.30 Lakh Rupees. The engine provides a fuel economy of 18.5 to 24.4 kilometre per litre. The addition of an automatic gearbox would be a welcome feature in this car.

The Mahindra Bolero is a full-size seven-seater Sports Utility Vehicle that comes with a powerful diesel engine. The price of Mahindra Bolero is 7.80 lakh rupees. The vehicle also comes with the option of two-wheel drive and four-wheel drive as well. This makes this vehicle a capable off-roader and a perfect vehicle for rural India. The vehicle can comfortably seat seven people and carry luggage as well. The Bolero only comes with an option of a manual gearbox. The claimed fuel economy is 16.7 kilometre per litre.

The Nissan Magnite and Maruti Suzuki XL6 are some of the best cars under 10 lakh in India.

2. Which car has the best engine under 10 lakh?

The Mahindra Bolero has the best engine under 10 lakh in India.

3. Which is the lowest price car under 10 lakh in India?

The Renault Kwid is the lowest price car under 10 lakh in India.

The Maruti Suzuki XL6 is the most expensive car, under 10 lakh in India.

Published in A to Z, Automobile and Electronics