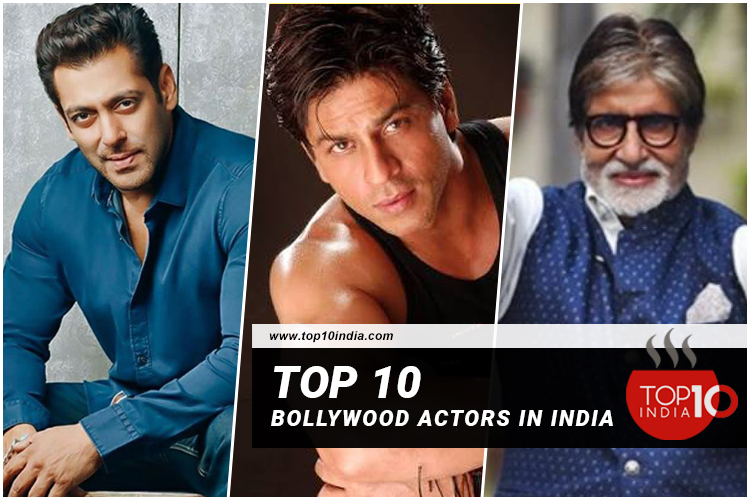 Top 10 Bollywood Actors in India: Bollywood as an entertainment industry has influenced Indian society and culture for decades. Bollywood inspires many Indian Trends as music, drama, wedding, dance, and even fashion, and who is making these trends? Of course, the actors. Whatever these actors do or wear becomes the trend or a fashion statement.

There are more than a hundred actors in Bollywood portraying a variety of character roles. Out of these here is the list of the top ten actors from Bollywood based on popularity and fan followings-

Salman Khan is a brand himself; he is a man with a big name and fame and doesn’t require any special introduction. He is popularly known as “Bhai” or “bhaijaan” by his fans. Salman Khan is the son of a screenplay writer Mr. Salim Khan. Commercially he is the most successful actor in Bollywood. Along with his acting career, he is also supporting humanitarian causes by the Being Human Foundation and famous for his charitable work in various fields. He started his acting as a supporting actor from the movie “Biwi ho to Aisi” and his first commercial movie was “Maine Pyar Kiya” (1989). “Hum Apke Hain Kaun”, “Bajrangi Bhaijaan”, “Wanted”, etc. are some of his top hits.

Badshah of Bollywood, SRK, or King Khan all is a different names for a single man, the one and only Shah Rukh Khan. He is considered as the king of the film industry for the last 30 years. SRK made his debut in the movie Deewana in 1992 and from there it was all uphill for him. He is the most famous actor all over the world with a great fan following. Besides acting he is the co-chairperson of a production house “Red Chillies Entertainment” and owns an IPL cricket team Kolkata Knight Riders. He is also labelled as Brand SRK due to his endorsement of many brands and Entrepreneurship ventures.

Amitabh Bachchan, the “Shahenshah of Bollywood” was born as Inquilab Srivastava in Allahabad. He is the greatest and most influential star in Bollywood history. He was a dominant actor in the 1970s-1980s era and also called the “one-man industry”. People also call him an ‘Angry Young Man’. He is an actor, producer, singer, and television presenter. He is not only famous in India but all over the world. He is the only actor in Bollywood who is still playing a lead role in films even at this age. The TV show named “Kaun Banega Crorepati” is hosted by him which started in the year 2000 and still running. He is also known as Big B in Indian cinema.

Mohammad Aamir Hussain Khan or Aamir Khan is known as Mr. Perfectionist in Bollywood. He is an actor, director, writer, singer, producer, and talk show host. He is a versatile actor with Midas touch, as whichever movies he acts in, it never misses to touch the heart of his audience. Aamir is especially known to do some out-of-the-box content movies and has the most top-rated movies in Bollywood on IMDb Ratings.

Akshay Kumar’s real name is Rajiv Hari Om Bhatia is an actor turned producer and also a martial artist. He has done more than 100 films out of which 53 are commercially successful. He is also known as Khiladi of Bollywood as he has worked in a series of films having Khiladi in its title. He is a versatile actor, expanded his roles from action to comedy adding the flavour with romance and seriousness. This star’s secret for a fit body is Kickboxing, basketball, swimming, etc.

Hrithik Roshan is the most handsome actor in Bollywood and is often called the Greek God of Bollywood. He is the son of Mr. Rakesh Roshan who introduced him by the film named “Kaho Na Pyar Hai” in 2000, which made him an overnight superstar. He is among the highest-paid actors of Bollywood and has played a variety of roles. He is very well known for his dance moves and his six-pack abs. He is one of the most dedicated actors of Bollywood who takes a deep interest in his looks and work in movies. He is also associated with social services and has endorsed many products and brands.

Ranveer Singh Bhavnani is one of the youngest and highest-paid actors in Indian cinema. He has been among the 100 celebrities on Forbes India’s Celebrity list. He is a self-made man who started his career as a model. He made his debut in the movie ‘Band Baaja Baaraat” which was commercially very successful. Apart from his filmy career he also endorses several brands like Thumbs up, Makes My Trip, Ching’s, Adidas, Head, and Shoulders, etc.

Who is the highest-paid male actor in Bollywood?

Ans. Shah Rukh Khan is the highest-paid male actor in the Indian film industry recently he is paid 100 Crore for his upcoming film Pathan.

Who is the richest Bollywood actor?

Ans. With $600 million net worth Shah Rukh Khan is the richest actor in Bollywood.