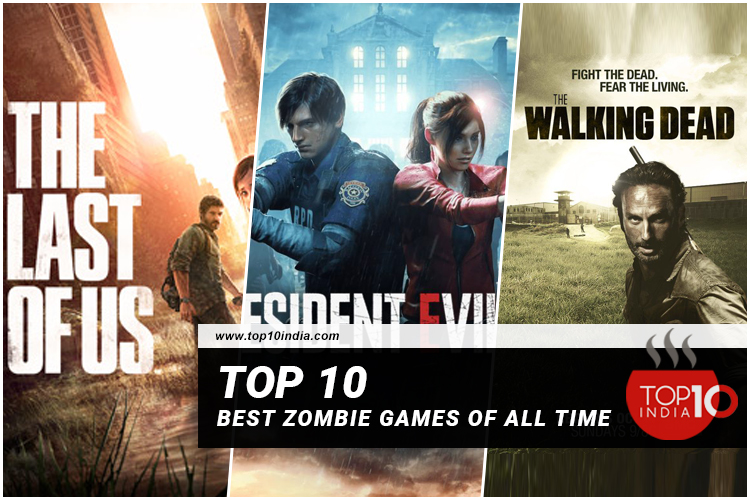 List of Top 10 Best Zombie Games of All Time

List of Top 10 Best Zombie Games of All Time: Zombie games are a lot more than just some ugly brain-thirsty undead. If you are into zombie games or games in general, you will agree on how much planning and brainstorming actually goes behind surviving in a game. And when it’s a zombie game that we are talking about, it keeps you at the edge, and the urge to survive at any cost keeps you alert all the time.

So here is a list of Top 10 Best Zombie Games of All Time that you can enjoy if you are into the genre, and even if you are not, you can sure try them out because all of them are so addictive that you will ask for more!

List of Top 10 Best Zombie Games of All Time

One of the major reasons this game is on top of the list is how this whole game proceeds. More than just a game where you have to use tactics to survive, it pulls the player into an immersive, emotional narrative. The game sets the creepy tone perfectly with the high-end graphics, which also adds up to the suspense and thrill felt by the player. The quest of the character, Joel and Ellie, are dark and tense yet very engaging.

Resident Evil 2 is the upgraded version of Resident Evil. This new version has better graphics and scarier zombies to give you all the chills. This one will surely give you that adrenaline rush as you make your way through the game because the zombies here don’t die with a single gunshot to their head. Shooting the zombies will only stun them for a few seconds, and you can make your way past them in that time. If you want to kill them, you will have to shoot them multiple times to show up again behind you.

This list of best zombie games would be incomplete without talking about The Walking Dead. This game is much more than just a character surviving an apocalypse while shooting down the undead. This game will test your social decision-making skills; as you proceed, you will find yourself feeling connected to the characters in your party, and somewhere down the line, you will have to sacrifice them willingly or unwillingly. Clearly, you will have to use your decision-making skills to proceed in the game.

State of Decay 2 has a picturesque Midwestern setting, and the graphic will definitely make you feel good even though you struggle to survive the brain-eaters. What makes it different from the rest of the games is that it lets you pick the protagonist. Every time you pick a new one, the character has their own different background story, personality, and combat abilities.

Dying Light makes running over zombies a fun task as you are put behind a steering wheel in picturesque countryside. How often is it that we get a zombie driving game? Not so often, right? So this is definitely one that you should give a try. The game gets complex and spookier as it proceeds, not complaining, though, because that adrenaline is what we all are here for!

The narrative of Dead Island is that you spend your holiday on an Island and the undead brain-eaters are ready to scupper your hard-earned holiday. As you proceed through the game, you will upgrade your combat skills and will also get to collect more impressive and one-hit-kill weapons. This procedure itself is so addicting that you will find yourself addicted to the game to check out the more advanced weapons that can be used against the enemy.

World War Z is the kind of game that is more fun when played with friends or a bunch of strangers. The interesting part of this game is that you can choose the role you want to play and how you want to save the ‘world’ from zombies. You can be a slasher who takes down the enemies or a fixer who lays down proper plans to trap and secure areas from the zombies. Whichever role you decide to take on, you will get plenty of upgrades as you level up in to game against the zombies.

Unlike all the other zombie games listed here, this one does not require you to escape the zombies, and rather you are the apocalypse here. Quoting the developer of Zombie Night Terror, “the only way to survive the zombie apocalypse is to BE the apocalypse.” In the game, your mission is to make sure that everyone dies by spreading the zombie plight. But it’s not as easy as it sounds because as you proceed with your enemies, in this case, the civilians become stronger and use powerful weapons against you. The twist this game came up with in the world of zombie games is definitely attracting the gamers.

While most of the zombie games out there are about being aggressive and killing the zombies to survive, Project Zomboid is all about avoidance, a defensive playstyle, and careful management. This game brings you the closest to a real zombie apocalypse situation as it requires you to hoard food, first aid, and other necessities required to survive while trying to avoid the zombies. And let’s be honest here, that’s what we all will do if an apocalypse was to happen in the real world.

Death Road to Canada takes you on a spooky road trip from Florida to Canada. As you proceed through this game, you can recruit new survivors to be on your side, and each survivor comes with their own stats and skills, which helps you get through the game. The worst (yet the best) part about this game is that it does not think twice before permanently killing your randomly generated allies. The game requires you to keep moving, even if it means leaving someone behind to survive.

Playing games is a proven way to improve your help your concentration and decision-making skills. The list above is dedicated to bringing the best zombie games out there, considering many factors. Some of them for sure can be classified as horror, but in the end, it’s all about stimulating your brain and using the best strategies to survive throughout.

Published in A to Z, Entertainment and Game