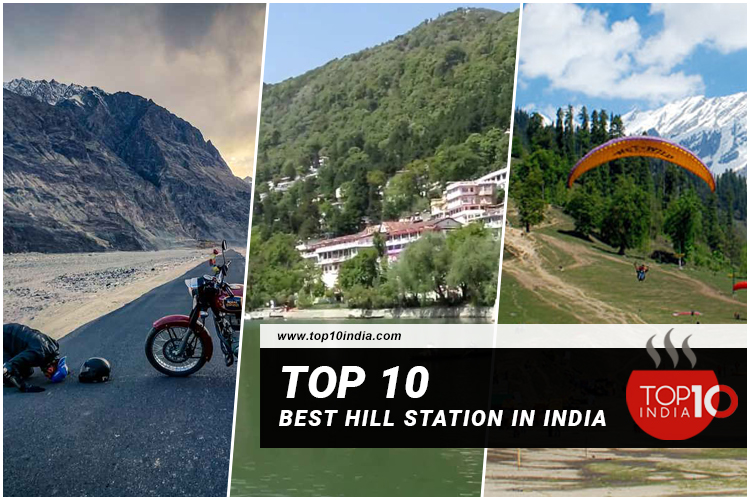 Top 10 Best Hill Station In India: Leh Ladakh, famous as the land of the high passes, is the number 1 hill station in India where the honeymoon couples enjoy the most, having sunstroke and frostbite facilities. India has a diverse range of destinations to give in almost every part of the world. The British built some of India’s most popular hill stations to escape the hot and humid conditions of the lower-lying cities. Visitors from all over the country and the world have flocked to these hill stations.

If you are bored at home and want to spend some gala time with your loved ones at some holiday destinations in India, we are going to help you make a better choice that will prove worth your money and are budget-friendly too. India’s best hill stations are ideal for a fun and unforgettable vacation with family and friends or even a solo trip. These stunning and tranquil hill stations in India are sure to take you on an unforgettable journey. Here is our list of the Top 10 Best Hill Station In India.

No 1. Leh Ladakh – Land of the High Passes

Travel to Leh Ladakh, one of India’s best hill stations, is also one of the most well-known. There are many reasons why Leh Ladakh is considered one of India’s most popular hill stations, from traveling through the world’s highest passes to taking in the scenic beauty. You can take an easy tour package that includes transportation and lodging, or you can schedule an exciting bike ride to the destination.

No 2. Nainital, Uttarakhand – The Hill Station of Lakes

Nainital, a small town in Uttarakhand’s Kumaon region, is India’s most popular honeymoon destination. It is also known as India’s “Lake District,” and it has something for everyone, from families to couples to solo travelers.

No 3. Manali, Himachal Pradesh – Valley of the Gods

Manali is one of the best hill stations in India in May and June, known for its scenic beauty, flowery gardens, snow-capped mountains, and orchards of red and green apples. Manali, one of India’s most famous hill stations, has a touristy feel to it from the moment you arrive.

Mussoorie is one of India’s most popular hill stations and is known for being the birthplace of Ruskin Bond. The hill station, which is about 34 kilometers from Dehradun, provides breathtaking views of the Himalayas to the north and the Doon valley to the south.

Gulmarg is home to the world’s tallest gondola, which reaches a staggering height of 4000 meters above sea level. In the summer, this hill station transforms into a trekkers’ paradise. The main tourist activities at Gulmarg include skiing and snowboarding, while the main market is brimming with jewelry, pashmina, and other one-of-a-kind souvenirs to take home.

No 6. Darjeeling, West Bengal, is known as the “Tea Plantation Hill Station.”

Darjeeling provides breathtaking views of the Kanchenjunga and other mountains. This is one of India’s hill stations known for its extensive tea plantations. In reality, most Darjeeling tour packages include visits to tea plantations as well.

No 7. Shillong, Meghalaya- The East’s Scotland

The monsoon season is the best time to visit Shillong and book a tour package. During the rainy season, the entire city of Meghalaya seems to be bathed in a new life. There are many things to do here, like seeing breathtaking landscapes. A relaxing picnic near the Elephant Falls, a boat trip on Umiam Lake, or a climb to Shillong Peak are all options.

Gangtok, the capital of Sikkim, is another well-known hill station in India. This is a town that combines the charm of a hill station with the conveniences of a community. In Gangtok, the ropeway offers a panoramic view of the entire city and the surrounding areas.

Chamba Valley has been the subject of many legends, both mystical and historical, in the past. This Indian hill station is home to a host of temples, the majority of which are dedicated to Lord Narayan, Hinduism’s “most versed god.”

No 10. Tawang, Arunachal Pradesh- The Hill Station Where Tsangyang Gyatso, the Sixth Dalai Lama, Was Born

Tawang is home to India’s largest Tibetan monastery, which houses nearly 500 monks. Tawang, one of India’s top 10 hill stations, is known for its fresh mountain air and amazing trekking opportunities.

Leh Ladakh – Land of the High Passes is the most beautiful hill station in India.

2. Which are the popular hill stations in India?

3. Which is the most beautiful hill station in the world?

Manali is the most beautiful hill station in the world.

4. What is famous as a hill station?

Twang Arunachal Pradesh is famous as a hill station.

Published in A to Z, Destination and Others