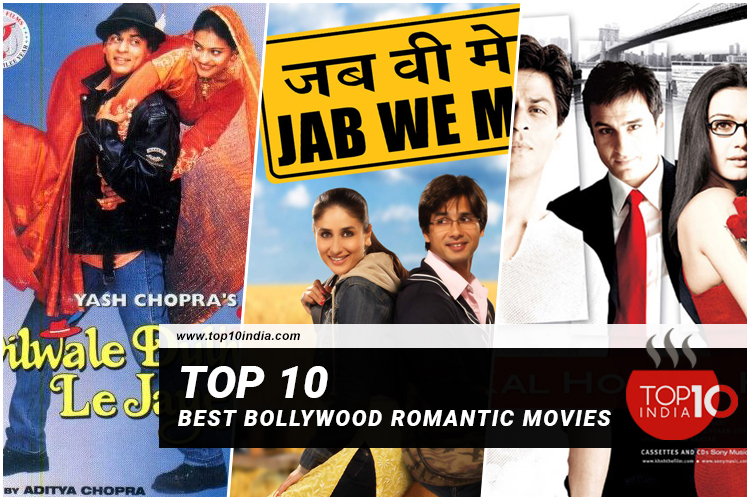 Top 10 Best Bollywood Romantic Movies: Love is the strongest emotion that motivates people to go to lengths they didn’t think was possible for them. Everyone wants a pure, passionate, true love in their life. Bollywood movies have done a great job in turning these emotions into life in their movies. Most of the Bollywood movies show love stories facing different and difficult obstacles in life but in the end, everything is sorted and we get a happily-ever-after ending. The people get attracted to these movies as they feel connected to the story and find it relatable. That’s why romantic movies are commercially more successful.

Bollywood is known for its romantic movies. We are here to talk about some of the top romantic movies of Bollywood. So, without further delay here is the list of the Top 10 Best Bollywood Romantic Movies based on IMDB ratings and popularity, So, let’s get started-

Dilwale Dulhania Le Jayenge is considered a landmark of all romantic movies of Bollywood. The story is about a boy named Raj and a girl named Simran. Raj is a carefree boy whereas Simran comes from a traditional family. They both meet each other on a trip to Europe. They fell in love and then get parted to their ways. When Raj realizes his love Simran has moved to India as her marriage is fixed, he follows her to India to get his love back. The movie has beautiful scenes and good chemistry between its lead actors which embarks love in everyone’s hearts.

Jab We Met is a romantic comedy movie released in the year 2007. The story goes with Aditya, a depressed Businessman, and Geet a bubbly Punjabi girl. Aditya was on the edge of committing suicide and aimlessly boards a train where he met Geet, a happening, outspoken and confident girl. She helped him getting tickets from Mumbai to the Delhi train. At midnight on the random station, they are situationally left alone. She tells him that she would elope with Anshuman, her boyfriend. They meet and depart and then meet again. After meeting Geet, Aditya was a changed man and sees new colors of life but this was not with Geet. Finally in the end they acknowledge their love and live happily. The movie was a blockbuster and with a very fresh concept that touches the heart of its audience.

Kal Ho Na Ho is a Hindi romantic comedy-drama film released in 2003. The story revolves around a pessimistic girl Naina, who gets new meaning in her life after meeting Aman, her new neighbour. She develops feelings for him while Aman presents himself as a married man and asks her friend Rohit to love and cherish her. Aman is very ill he has very little time left so he doesn’t want to reciprocate her feelings which will be heartbroken at last. The movie states that it is not only the romantic love that is important for our life but also the collective love of our people and our friend that saves us and protects us from tragedy and grief.

Veer Zaara is a super hit romantic drama movie released in 2004. The love Saga starts between an Indian pilot named Veer Pratap Singh and a girl Zara Hayat Khan daughter of a Pakistani politician. False charges were laid against Veer and spend years of imprisonment in Pakistan whereas Zara believes him to be dead decides to spend the rest of her life in India in Veer’s village. Until a young lawyer named Samiya Siddiqui fights Veer’s case and unites Veer-Zara. The movie says that love has no boundaries, no bars.

Rockstar released in the year 2011, is a Hindi language musical romantic drama. It’s the story of college student Janardhan also known as Jordan wants to become a rockstar and desperately searches for his inspiration. In the process, he meets Heer Kaul and desperately loves her. They meet and separate many times. In the end, the girl died due to illness. Her death filled him with grief and made him arrogant but his popularity grows day by day. He becomes the Rockstar that once he was aspiring.

Devdas, released in 2002, is a romantic-tragedy movie based on the novel of Sharad Chandra Chatterjee. This is a world-class movie based on the childhood love of Dev and Paro. When their pure love is not accepted by their families, Dev leaves the house and Paro marries Thakur. Dev becomes a drunkard and finds solace with Chandramukhi, a prostitute. In the end, Dev dies by drinking too much alcohol. This was a multi-starring blockbuster movie not only in India but abroad.

Kuch Kuch Hota Hai released in 1998, is a blockbuster romantic, drama film. It is a love triangle played in two different periods having a gap of 8 years. In the first half of the movie, there are three college friends, Rahul and Anjali as best friends, and a new entry in college Tina. Rahul and Tina fall in love with each other and Anjali parts away. Tina died at the time of childbirth and she wrote a letter to her daughter named Anjali to read on her eighth birthday. She asks her to unite her father with his true friend and love Anjali. they both were having the same name. The movie is full of college-time drama; love; comedy, and comic timing of its character make the movie wonderful.

Dil Se released in 1998, is a masterpiece movie. Whatever you want to see in a movie, whether it is good characters, good story, good music, all are here in this movie. The story starts with Ajay, a radio broadcaster and a journalist, who meets a mysterious young woman on railway platforms. He falls in love with her but she doesn’t reciprocate the same. Then time changes, the story changes, and at the end, she acknowledges her feeling. The movie was very famous for its music.

No.9 Rehna Hai Tere Dil Me

Rehna Hai Tere Dil Mein also known as RHTDM. This movie was released in the year 2001 and it is a romantic drama movie. In this movie, Reena is about to marry Rajiv. Maddy feels for Reena, so he impersonates himself as Rajiv and meets with Reena. But very less he thought about the consequences. The movie was a big hit at the time of its release and its songs were quite popular among the youngsters.

Hum Dil De Chuke Sanam was released in the year 1999. The movie focuses on post-marriage love. The love Saga begins in the deserts of Rajasthan between Nandini and Sameer. Sameer wants to learn music so he comes to Rajasthan to learn music from Nandini’s father but when the latter came to know about the duo, Sameer was forced to leave the country and Nandini was married to a man called Vanraj. When he came to know that his wife is in the love of other men, he decides to unite them irrespective of the norms of society. This movie was the turning point in the life of its characters it brought them name and fame.

Which Bollywood Director given the best romantic movie in the Indian film industry?

Ans. Yash Chopra was known to produce the best romantic movies of all time.

Which Bollywood Actor has given the most romantic movie in the Indian film industry?