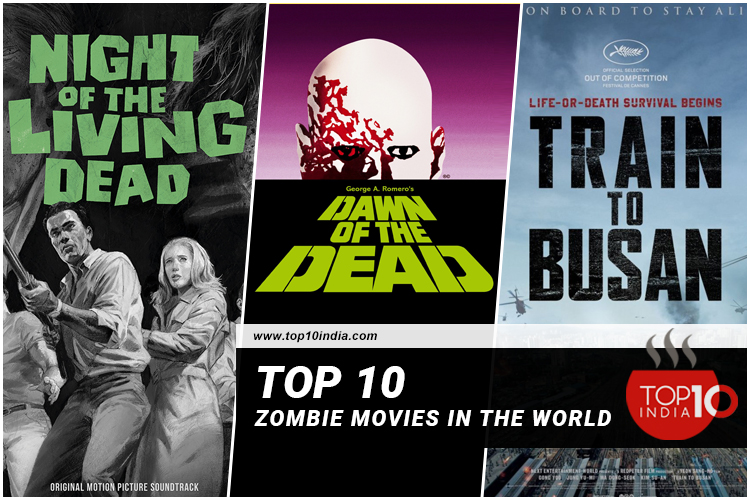 Top 10 Zombie Movies in the World: Are you a big fan of horror movies? Have you ever thought, what would happen if you get trapped in the herds of zombies, and what it will take to survive such a holocaust? Or have you ever imagined yourself as the only hero who survived the living dead? Well, then you must watch our top ten list of zombie movies to prepare yourself for the apocalypse, or if not then at least to make a bucket list out of this, to watch some top zombie movies for the entertainment only. So here we go.

Top 10 Zombie Movies in the World

One of the highest-rated and a real classic horror movie. The story revolves around when a group of brutal and blood-thirsty cannibal zombies is ravaging people around the east coast of Pennsylvania and a group of 7 lone survivors barricades themselves in a farmhouse in a rural village to survive. But it’s not long before the ghouls get to them. What will happen when these survivors will take extreme measures to survive? The movie has some intense and breath-taking moments and great suspense in the survival of these trapped people, which makes it our number one spot.

This movie is no different than the number one spot as it has the same IMDB rating and the story also revolves around the same spot as a group of lone survivors take shelter in a big shopping mall when the whole city is crowded with bloodthirsty, flesh-eating zombies. That special effects are however much better and realistic than the previous one. There are moments in the movie when you will bite your nails and grind your teeth. This movie is only for people with a strong temper.

Let me tell you something straight, if you are really a zombie movie fan then you cannot miss this South Korean thriller. It is a must-watch horror zombie movie for everybody. The story revolves around a train full of passengers traveling to save their lives as the whole city has been infected with the virus and people are turning into zombies. The trouble starts when an infected person board the last coach of the train turning everybody into zombies in that coach. The train keeps moving to different stations but none are safe to deboard as they are swamped by herds of zombies. So, the driver talks to the radio station to know where they can stop and gets to know that only Busan is safe, which is the last stop. The story goes around the survival of those passengers till the Busan arrives. The movie contains some daring and thrilling scenes and is a must-watch.

Who said horror-comedy movies are not good? The next movie on our list proves that completely wrong. The movie Shaun of the dead is definitely one of the best horror-comedy movies of all time. A protagonist Sean and his friend after surviving a zombie apocalypse finds his ex-girlfriend Liz. Where he tries to win her back while fighting the zombies. The movie goes from one weird scenario to other and is a good mix of events like a cocktail.

This movie is a post-apocalyptic horror film, where the lead character wakes up in an abandoned hospital and walks out of it only to find out to his horror that the whole United Kingdom has been drained out by a dangerous virus. Struggling to find out what has really happened he makes his way home, surviving the onslaught of the zombies. The movie is packed with all sorts of heart-pounding scenes and mysteries as the story unfolds.

Here is another horror-comedy to our list that will really entertain you, as the movie is packed with sorts of flavors like killing zombies with weapons, comedy, developing love interests, journey to survival, and much more. This is also a post-apocalypse movie where a timid and introverted young lad Columbus, meets an experienced zombie killer Tallahassee and they team up to find more survivors. They eventually meet two girls who have managed to survive the chaos. What happens next, I leave it to you to watch and enjoy.

This one on the list is an action horror film which is the most violent, gruesome, and gory movie and a remake of our number two movie on the list. This movie has some extreme gore and bone-chilling violent scene while also managing to retell the original story with some new layers to be uncovered. The story revolves around a handful of survivors who have to find out their path to survival but this time the zombies are much stronger and faster.

World War Z is an apocalyptic horror film that is full of breath-taking scenes and an unstoppable blockbuster ride. When suddenly people start turning into zombies due to a virus outbreak. Our hero must survive and save his family in his race against time. When cities are filled with zombies, the remaining survivors take shelter at the sea in the military ships, and while our hero goes to find out ways to fight and demolish these zombies with the military forces. He finds out some interesting facts and weaknesses of these zombies which I believe telling here will ruin the fun for those who will watch it for the first time.

Planet terror is certainly a standout among all as it offers a refreshingly ironic take on zombies. The movie contains violence and is action-packed with thrilling events and a storyline. The movie starts when a dangerous government experiment unleashes a gas that turns the entire town into flesh-eating and blood-thirsty zombies. Only a few people left from the effects of the gas are remaining and they make their way out to survive this holocaust.

The main character or the only character left is a scientist. He is the last human to survive the zombie apocalypse and is now attempting to find a way to reverse the effect of the virus by using his own blood. The story revolves around him finding if there are any survivors and fighting the zombies who are attracted to the sound. This is a science fiction horror movie based on the 1954 novel of the same name by Richard Matheson. The movie is packed with action, thrill, and some really mind-bending things in it.

So, these are the movies that made it to our top ten list based on ratings, storyline, popularity, heart thrilling scenes, and uniqueness. Few honorable mentions are “Resident Evil series”, “Rec”, “28 weeks later” and “dead alive”.  Sit back and relax while watching these horror zombie movies.