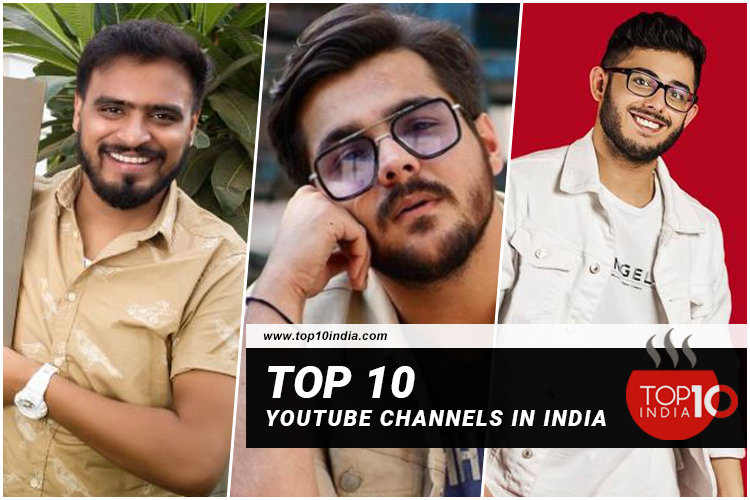 Top 10 YouTube Channels in India | Most Followers Channel: In this era of smartphones and smart technology, one of the most used and explore social media is YouTube. YouTube is no more a mere entertainment platform. It has helped independent artists grow and reach out to the right audience. YouTube is a platform where anyone and everyone is welcomed, and being a YouTuber is a career in itself. Many people have gained recognition through this platform and have also helped motivate others to follow their passion no matter what. Here is a list of India’s top 10 YouTube channels that the audience is most loved and appreciated. Check out this list to know if your favorite YouTuber has made it to the top ten.

Ajey Nagar, popularly known as Carry Minati, is well known for his “dissing” content. He disses the cringe-worthy user-generated content that gets viral on all major social media platforms. He posted his first YouTube video at the age of 10 and has not looked back since then. His popularity shot up so that he even ended up interviewing Tom Cruise and Henry Cavill. All of Nagar’s videos are in Hindi, which helps him cater to a considerably good Indian audience and can be considered one of his biggest plus points.

Before going to YouTube, Ashish used to post his videos on various other social media platforms. His content is always light-hearted and is sure to tickle a bone with his multiple characters. He dropped his civil engineering to focus more on his YouTube channel, and by the end of the year, 2018 got 8.7 million subscribers. He also made his TV debut with the show “Pyar Tune Kya Kia” and got admitted to John Acting Studio to learn acting skills.

Amit Bhadana is a well-known YouTube personality and comedian who became the first Indian individual YouTube content creator to reach 20 million subscribers. Amit is a law graduate and started his YouTube channel in the year 2012. Viewers really enjoy his unique accent and speaking style. His short punch lines filled with interesting rhymes are definitely the trademark of his content. His charisma and goofiness have helped him establish a very close relationship with his subscribers.

Bhuvan Bam is the man behind India’s most loved YouTube channel, BB Ki Vines. Bhuvan creates comedy content and music videos on YouTube which is widely recognized and appreciated by the audience. He is one of the few Indian influencers who hit some big brands like Tissot and Pizza Hut. Rohit Raj is a not-so-known name behind this channel who has helped Bhuvan Bam turn his content into business and brand.

Gaurav Choudhary is the name behind the most famous Indian tech channel, ’Technical Guruji.’ Chaudhary started his YouTube channel in 2015 and started with posting advice and product reviews. The channel saw rapid growth and soon became the 9th most subscribed-to-technology YouTube channel. Though based in UAE, Gaurav Choudhary makes sure to create his content in Hindi and hence has a good amount of reach among the Indians. He not just reviews products but also explains concepts and details on how tech works.

This channel, formed by three best friends, Zayn, Nazim, and Wasim, serves you with content ranging from comedy to science fiction. They started off their YouTube channel in the year 2015. Initially, their videos didn’t get a good response, but that did not stop them from further experimenting with their content. They have not looked back since then and always manage to develop an interesting and unique idea, which makes them stand out.

Sandeep Maheshwari is a widely recognized motivational speaker who has helped uplift the lives of students and young individuals. He is also a renowned photographer and founder, and CEO of imagebazaar.com, where you can find a vast collection of Indian images. You can search for his motivational quotes or visit his YouTube channel for a daily dose of motivation and positivity. Sandeep started his career with modeling at the age of 19 but left the field due to certain issues.

Rajesh Kumar, the name behind Fact Techz, is blowing minds with his informative videos on science and technology. Rajesh is undoubtedly India’s one of the biggest sci-fi YouTubers. When he was in 12th standard, he garnered 5million subscribers, which is a great achievement. His passion for science made him start his own YouTube channel as he wanted to share his knowledge and information with the world.

Dr. Vivek Bindra is a motivational speaker as well as a renowned business coach. He also holds a Guinness World Record for the largest online business learning sessions. Bindra inspires millions of people with his content on business strategies and leadership development. He not only motivates his followers through the YouTube channel but has also written 10 high-power motivational books. Through his videos, he tells people how to turn their passion into entrepreneurship.

Bilal Shaikh is a rapper, singer, songwriter, and music composer known by his stage name ‘Emiway Bantai.’ Emiway became a household name with his song ‘Asli Hip Hop’ from the famous Bollywood movie ‘Gullyboy.’ Initially, he aspired to become a doctor. Still, during high school, his focus shifted to raping, and he posted his first song on YouTube in the year 2013. Emiway used to rap in English, but his father’s recommendation started writing rap in Hindi as well, and the audience felt connected to him instantly. Hailing from a middle-class family Emiway has struggled a lot, but thanks to his talent and hard work, he has earned the name and recognition he deserves.

Being a content creator is not an easy job. It takes a lot more effort than what we see on the screen. Every content creator out there is special and unique in their own way, and all are putting in efforts for their audience. I hope this list inspires you to follow your passion, and what we can learn from all these personalities is that even a small step towards your dream can be your stepping stone for the bigger stage. So never give up and be consistent and keep working hard for your goals.

Published in A to Z, Brands, Personality and Social