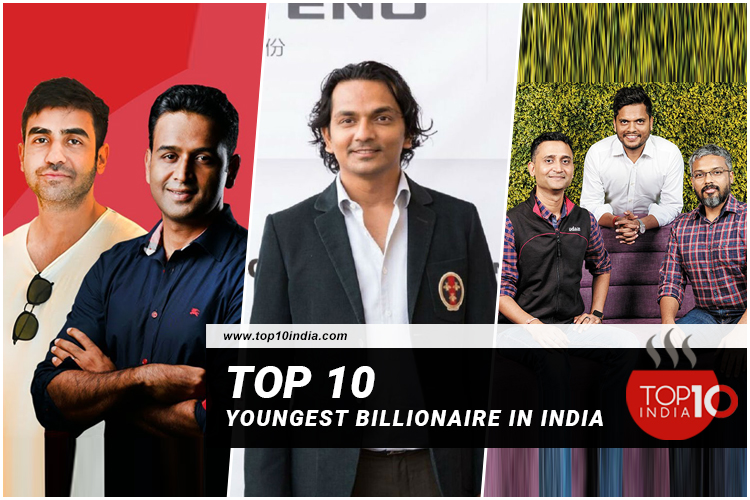 Top 10 Youngest Billionaire in India | Teenage Billionaire List: Talking about age, age is just a number, and trust us, it has nothing to do with you being among the richest persons in the world. This article will discuss 17 Indian entrepreneurs, aged under 40, who have been featured in Hurun’s 40 and made it under a self-made rich list. Comprising altogether, they hold a fortune of ₹45,000 crores. Moreover, it may excite you to know that 9 of the 17 billionaires business headquarter is located in Bengaluru.

The list here provides the Top 10 Youngest Billionaire in India. This might be surprising to you, but the list consists of the name you may already know. But they are all self-made Billionaires. Let’s get started with the list and disclose the people who topped the list to be the youngest billionaires in India.

Nithin Kamath and Nikhil Kamath are at the top of the top 10 youngest billionaires in India. Kamath brothers co-founded an online trading platform popularly known as Zerodha. Zerodha has now grown by leaps and bounds and has become India’s largest stockbroker, and this all because of the hard work and vision of the Kamath brothers and, of course, the support from the number of clients. Nithin Kamath, at the age of 40, and Nikhil Kamath at the age of 34, have created this wonderful online trading platform that is providing people to invest and gain on their investment. If you are somebody into trading, then you should surely try Zerodha.

At the second position with a wealth of ₹14,000 crores, we have Divyank Turakhia at position 2 of the top 10 billionaires in India. Divyank Turakhia is the founder and CEO of Media.net. He became a billionaire back in 2016 after Media.net was sold for nearly $1 billion in 2010. Divyank Turakhia, along with Media.net, founded 2 more companies, namely  ResellerClub and Skenzo. He may be currently on break, and it is also said that he is setting up a family office and is looking for the next big opportunity to come back and show the world that he is still in the business.

At number 3, with the smashing entry of Udaan co-founders Amod Malviya, Sujit Kumar, and Vaibhav Gupta, it made the space on the top 10 billionaires in India. They are all under the age of 40 and have accumulated wealth for rupees 13100 crores. They have witnessed about a 274 % increase in the wealth led by the strong investments in Udaan. During the period of lockdown, Udaan has witnessed great success in being a B2B marketplace. Udaan is among the best platforms to get yourself registered if you are a business or a shop owner.

Byju’s owner Riju Ravindran, at the age of 39, acquired a wealth of rupees 7800 crores. All because of an online education platform Byju’s, he has secured the position at number 4 on top billionaires in India. The valuation of Byju’s as of August 2020 is to be achieved at $10 billion. Riju Ravindran has registered a 117% increase in his wealth as compared to the last year. It is also observed that Riju Ravindran’s Byju’s ranked third in Hurun India unicorn index 2020. The motive behind Byju’s is to Think and Learn, and it would not be wrong to say that this platform has been achieving this Moto very rigorously.

This man Ritesh Agarwal started with the company Oravel Stays, which is now popularly known as Oyo. Although the covid-19 pandemic has taken over the hospitality business globally and has somehow affected Oyo’s growth story, we can still witness the decline of 40% or rupees 3000 crores. But Ritesh Agarwal, at the age of 26, is still the youngest billionaire in the rich list accumulating the wealth of rupees 4500 crores. Although it is a tough time for Riteish to cope with his hospitality business, Oyo is the name or is the brand that sells well. Hopefully, in the coming time, it will achieve the great heights it was previously achieving.

The co-founder and CEO of the logistic company Rivigo, he is Deepak Garg. Deepak Garg is just 39 years old and has a wealth of ₹3200 crores. Back in September 2019 ₹, 35 crores were invested by KB Global in Rivigo at the valuation of ₹7593 crores. Then Rivigo entered the Hurun India Unicorn Index 2020.

The co-founder of online food delivery platform Zomato, Deepinder Goyal, has made his presence among the top 10 billionaires in India. With the worth of ₹ 2200 crores upon the recent valuation of Zomato. His wealth increased by 16% as compared to the last year. Also, remember that in January 2020, Zomato acquired Uber eats India, and in an all-stock transaction, the deal gave Uber 9.99% ownership in Zomato.

Published in A to Z, News and Personality