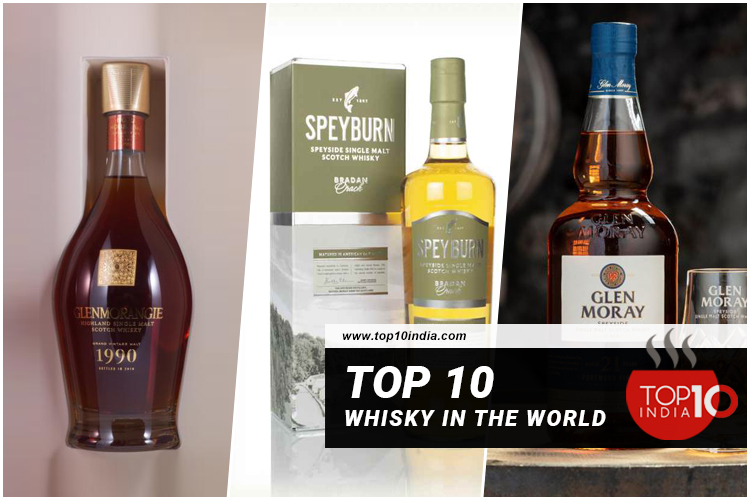 This expansion of the market where on the one hand, allows us to taste various types of whisky, on the other hand, creates numerous doubts and confusion among folks regarding which bottle of whisky they should be buying. But fret not; here, we have flocked up the top 10 whiskies from all across the globe to enthrall your mouth and make you want to wish for another sip. So, let’s scroll!

Glenmorangie is a household name, and rightly so cause the brand knows what works and makes it the best whiskey brand. You can’t go wrong with a bottle of Glenmorangie, and their Grand Vintage 1990 Single Malt whisky follows the tradition without fail. First released in 2016, this drink quickly went up the charts, thanks to its balance. It offers a little of everything from a touch of vanilla and oak to a slightly malty finish.  The aroma of cinnamon and cumin, along with the notes of ginger, leather, Christmas cake, and chocolate, makes its high price worth it.

If you are looking for a pleasant whisky in an affordable price range, our second rank holder, Speyburn Bradan Orach, can be your drink of choice. Infused with lemon, green apple, honey, and vanilla flavors, it proves to be an amazingly complex drink with a depth of character considering its price range.  Speyburn’s scotch whiskies are known for their excellent value of money factor, and this drink is no exception. This bottle of Speyburn comes without an age statement, indicating that it’s rather young. However, its ex-bourbon casks create a depth that is exceptional on rocks.

Coming third in the row, Glen Moray is no amateur when it comes to the whisky world. Having roots in Scotland, this iconic brand has won several awards and made its mark in the whisky market. Considering the flavor palate includes various flavors, from butterscotch and shortbread to curd and meringue, it’s fairly cheap, which makes it famous among beginners. Coming from a brand known to be partial to a sweet taste, the citrus tang in this drink comes quite as a surprise.

It’s not a child’s play to please whisky connoisseurs and be welcoming enough for the whisky newcomers, and this drink achieves this balance flawlessly. Coming fourth on the list, this drink has the perfect balance of fun and depth, making it one of the most sought-after drinks. Craigellachie’s 13 Year Old was first launched in 2014, and its exciting flavors quickly made it a famous choice among beginners and connoisseurs alike. Craigellachie’s 13-Year-Old fudge, toffee, and fruity flavors are like a breath of fresh air among the regular flavors of smoke and leather.

If brand value means anything to you, then you can go for Highland Park brand whiskies. From the bold packaging to the equally exquisite taste found inside, this drink screams excellence. Fifth in the line, this drink is known for the value for money aspect. The medium price range, along with the relishing quality, makes the drink one of the most inviting to the folks. The drink displays a combination of licorice and sweet notes with smoke and an almost salty aftertaste.

This slightly unconventional brand comes sixth on this list. The brand takes pride in doing things differently, and since the time it was set up in 1782, it has introduced a range of unique flavors, setting it aside from the rest. Distilled three times- first in Bourbon casks and then again in wine barrels, it’s a whisky that’s won awards for a reason. The 24 Year Old starts with the subtle flavors of orange peel, sugared almonds, and chocolate truffles and then lays upon the stronger honeyed barley and pineapple flavors.

Since it’s the World’s most widely distributed Scotch brand, Johnnie Walker is guaranteed to be a success no matter what the occasion is. Standing seventh in the row, Johnnie Walker Blue label shows a great scope of improvement. This whisky is known to have a velvety texture and the unique flavors of hazelnut, sandalwood, toasted oak, and tobacco. Considering the brand’s signature spiciness, you can expect an explosion of flavors starting from the first sip.

Bowmore 15 Year is all about balance as it combines leathery sherry notes with that of the burnt raisins. The drink spends the last three years of distillation in ex-sherry casks, which infuses a specific sweetness to the whisky. At the same time, the sweetness in the whisky comes from sources like coconut, cinnamon sugar, and tropical fruits; the aroma results from dark, woody spice making it a well-balanced whisky.

Being one the best-blended whisky, Buchanan’s 12 Year Scotch was bound to make it to this list. This deluxe blend offers flavors of orange and chocolate in a slight undertone while the flavor of the smoke is subtle rather than overpowering. Getting malts hand-picked by Master Blender, Keith Law, the whisky was destined to be famous. When sipping, you’ll experience a strong vanilla note along with a slight hint of vanilla cream and cigar box.

Another Islay-based whisky makes it to the list. If you incline the sweeter profile, then Bunnahabhain is the drink for you. The first sip will offer you flavors of nutmeg, leather, and smokiness, while an in-depth tasting will reveal numerous flavors like chestnut, stewed raisins, roasted malt, and mixed spices. Don’t get fooled by the strong sherried aroma, as this drink has plenty more to give you than what first meets the eyes.

Conclusion (Top 10 Whisky in the World)

Who doesn’t love a good bottle of whisky, right? But choosing from innumerable brands lining the shelves to selecting from a wide variety of categories alone like Scotch, Irish, or Bourbon more often than not creates a dilemma among people. We hope that this list served its purpose and helped you pick the perfect whiskey bottle for you. Because when it comes to whisky, the cliché is true: there is something for everyone.  Be cautious as drinking is always injurious to health.

Published in A to Z, Brands and Dining