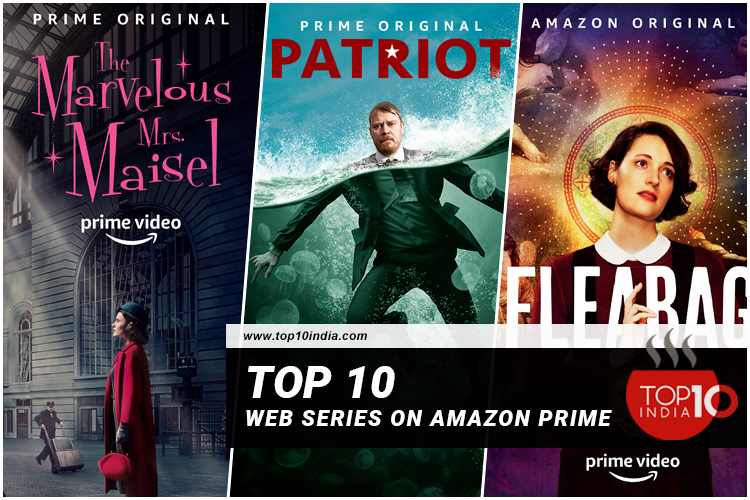 Top 10 Web Series on Amazon Prime | Most-Watched Series: Today, in this article, we are going to introduce a new top 10 web series on Amazon prime that will surely go to help you to have something new, exciting, and great to watch. Get ready to be introduced by a new crime line shows that you can’t resist if you are a movie and web series enthusiast. Here’s a great place to start with a look at the 10 best Amazon Prime original series currently.

Amy Sherman-Palladino’s follow-up to Gilmore Girls and Bunheads has helped place the Amazon series on the map, and it’s got the Emmys to prove it. It’s an excellent, quick-witted, crowd-pleaser, exuberant fast-talking comedy with some heft. Set in 1950s city town, Rachel Brosnahan plays Miriam ‘Midge’ Maisel, the proper, upper west side wife who once her husband leaves her goes on a bender and finds herself on stage delivering a humorous, profanity-fuelled set in a very rundown dump of a club. The club’s agent, Susie Meyerson, takes an instantaneous interest in her, therefore while her home life is falling apart, Miriam finds herself trying to attempt to make a career as a stand-up comic in an era that too when females weren’t specifically welcome in this scene. It’s an incredible series that mixes comedy, feminism, and a little bit of stand-up history into a pleasant concoction of laughs, heart, and a fantastic lead performance from Brosnahan, who will ultimately be remembered for this role a similar manner Lauren Graham will forever be remembered for Lorelai Gilmore.

Patriot is a difficult show to describe, and generally, it is not for everyone. This story revolves around a man named John Tavner, a non-official cover agent for the CIA. Patriot is about the complication that arises during one of the missions he is assigned to. There was a mishap, a murder investigation, and human nature, and his relationship with his brother, his co-worker, and his father getting in his way. The intensity of the mission increases after every episode. The burden gets heavier. By the end of the series, viewers will be left desperate to find the safety value too early under some pressure because Patriot does a number on its audience and pitch-black comedy.

Set in London, Fleabag stars the splendid Phoebe Waller-Bridge (who also created the show) as “a young lady attempting to navigate modern life in London.” That description hardly does the series justice, however. It’s a hysterical, dirty, sexually devious, and astonishingly thoughtful meditation on grief and loneliness that goes by so quickly that viewers will wish they savored a lot before it ends. There’s a gut punch around each corner. However, fleabag invariably manages to elevate itself out of its depths to make us laugh once more. It’s one of the foremost distinctive, original comedies of the last many years.

David Tennant and Michael Sheen star during this infernally fun adaptation of Neil Gaiman’s beloved work of fantasy. Tennant plays Crowley, a demon who’s spent the past 6,000 years living life as a sort of Rockstar on Earth. Sheen plays his angelic counterpart, Aziraphale, a bumbling seraph who also calls Earth home and is a reluctant friendship and his immortal enemy. The 2 should unite to forestall the Anti-Christ – a kid in Oxfordshire – from rising to power, destroying the world, and, most significantly, Crowley’s better of Queen Mixtape.

Sneaky Pete comes from creators David Shore and Bryan Cranston, who together stars in the series’ bad guy. However, it’s the influence of showrunner Graham Yost that’s most felt: its similar crackle energy, wit, and fast storylines, combining a series-long arc with a few stand-alone episodes. In its initial season, recently released convict Marius is in debt to a villainous gangster for $100,000. Thus he hides out in a small Connecticut town by motion as his jail cellmate, Pete. Armed with 3 years of jail stories from Pete, Marius. The story revolves around his payback and meeting his family.

Titus Welliver is playing the lead role in this police procedural from Amazon. It’s about a detective charged with solving some hauntingly grisly murders. Harry Bosch is a former military man with a healthy respect for the rules and an unquenchable thirst for the truth. In every season, the main lead is presented with the case that threatens his view of the world and sometimes takes him undercover conspiracies, corrupt cops, and sometimes even his own mother’s murder. The subject line hair might be dark, but Welliver is having fun playing the role of brash, badass. That is why you should give this crime series a watch.

Catastrophe is a rom-com moving backward: There’s a pregnancy, after which they get married, and finally, then they get to know one another to analyze if they can fall in love. However, it’s the constant wrangling and sexual dissent between Rob (Rob Delaney) and Sharon (Sharon Horgan) that’s the essence that makes the series the funniest. The only drawback to Catastrophe is that we didn’t get enough time to spend with these characters.

Based on a novel by Phillip K. Dick published in 1962 with the same name, The Man living in the High Castle is set in an alternate, dystopian world where Germany won world war II. The Germans occupy the East Coast, and the Japanese occupy the West Coast, and there’s a no-man’s land in between. Exec-produced by Ridley Scott and Frank Spotnitz, the series sees numerous characters working hard to create a resistance against their occupation by collecting “forbidden newsreels” that show the alternate history during which the Allies won the war to reveal a larger truth regarding how the world ought to be. A dark exploration of what it means to be American, the person in the High Castle, is a well-acted, tense, and sometimes violent dystopian thriller with lots of twists and turns to keep viewers stay and keep guessing the plot.

Tig Notaro’s semi-autobiographical One Mississippi is about a Los Angeles DJ recovering from breast cancer who has got to come back home to Mississippi once her mother dies unexpectedly. It’s, therefore, quiet and restrained in its approach that viewers might not notice till they’re halfway through the first season simply how much of the comedy has seeped in. Less a comedy than a healing drama, it’s essential to view anyone who has ever suffered a loss.

In Transparent, Jeffrey Tambor plays a personality who decides, late in life, to transition into a woman, and that we see how that call affects her family in the most humorous and poignant ways that possible, together with the pain of an older woman realizing she’s wasted most of her life living as a man. It’s a sprawling family drama that tells its story in an exceedingly manner that dignifies and humanizes even its most deeply flawed characters. It’s a beautifully painful and painfully beautiful series.

Amazon prime has introduced us to quite surprising and quality rich shows that one can binge watch easily and interestingly. The above mentioned are the list of web series that are brilliantly worked upon and are the must-watch.