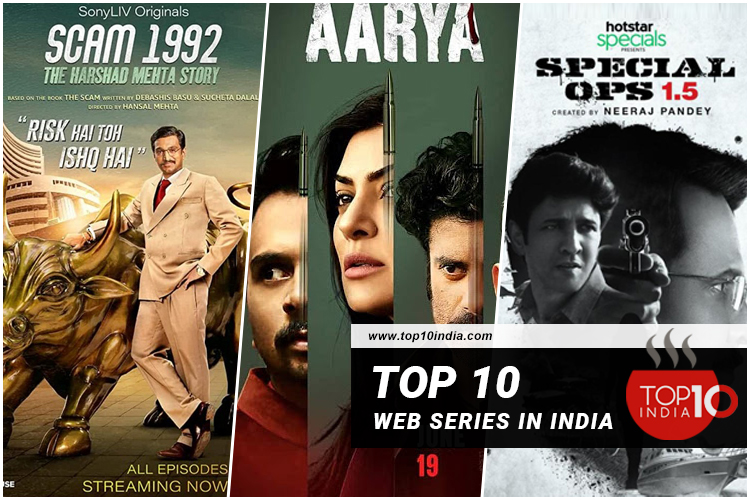 Top 10 Web Series in India | Most Amazing Series of All Time: Pandemic in India has shifted the growth of web series and OTT platforms to the next level. Before the 2020 web series, people were not very eagerly seen as they tend to opt for movies outside in theatres. But people drastically moved to OTT platforms for their entertainment in a safe place. Due to the worldwide Pandemic situation shooting for many movies stopped. That’s when people shifted from going out to have leisure in the comfort of their homes.

2020 was itself a total rollercoaster ride for everything. And the change is also seen in genres being explored in the OTT space. Majorly crime drama ruled these platforms, but the massive shift of audience has urged them to inculcate flavor in what they are giving their audiences to watch. A show with music rivalry in family, a show about share market gained success, giving OTT space has grown out to great heights and flying high right now.In this article, we will discuss some Indian web series that ruled the hearts of Indians.

Here’s to the top 10 web series in India.

To top the list, we have this amazing Hansal Mehta series that has raised the bar for Indian web content in 2020. Not a fan of the share market and things, but one thing is for sure that the impact of this Pratik Gandhi-led series will surely go a long way. The scam has taught one important thing that good content does not require to be dumbed down to reach the masses, and in the time where violence sells like hotcakes. Scam on SonyLIV is loved by many. With merely the initial episodes, Scam 1992, based on Harshad Mehta’s securities scam, takes you completely into the world of the share market. Everything worked in favor of the show, from the theme music to its simplification of technical jargon and even filter choice. The casting of the show has been praised in the last couple of months and deservedly so.

Next in line is Sushmita Sen starter Aarya. This series did not waste any time building up the plot and premises. Just after the first episode, it was clear that Aarya was going to be a binge-worthy ride, and to no surprise, it turned out to be a fully satisfying expectation with every episode. The show has very well-layered characterization. Smart use of old Hindi film music, using a bit of “Mahabharata” methodology, and Sushmita Sen’s screen presence all made Aarya rule the charts and be a delight to viewer’s eyes too.

Neeraj Pandey Created Special Ops started in a promising manner and largely stuck to the promise. In the lead role, Kay Kay Menon fit best into Himmat’s part and was the show-stealer here. In our opinion, the only drawback was the fact that the stakes were never just high enough for us to be concerned about the good guys in the finale.

This crime drama led by Jaideep Ahlawat is on the list, but honestly, Paatal Lok deserves a spot here. Paatal Lok got the review of The Indian Express film critic Shubhra Gupta stating, “Paatal Lok is fashioned as a crime thriller-cum-police procedural set mainly in Delhi, moving from several threads, some totally solid, a few comparatively weak, but managing to keep its hold on us. Walking in awareness and recognition of contemporary India makes it political and elevates it: Paatal Lok is amazingly written, fast-paced, and engrossing, and I thoroughly enjoyed it.” if you are a fan of crime drama and haven’t yet watched this, then go and watch it now, what are you waiting for?

In this dominating era of crime drama web series, Bandish Bandits took the audience by complete surprise. Merely by just a couple of few episodes, Bandish Bandits get enthralled by the world of classical music that this series created. Music being the significant pillar of this show, Bandish Bandits also stood strong on the shoulder of its story. The cast, including Sheeba Chadha, Rajesh Tailang, Atul Kulkarni, and Naseeruddin Shah, all were a treat to watch in this Amritpal Singh Bindra and Anand Tiwari series. Special thanks to Shankar Ehsaan Loy’s music as well.

A dark comedy genre made its entry through A Simple Murder in the list of India’s top 10 web series. Starring Mohd Zeeshan Ayyub, Sushant Singh, Amit Sial, Priya Anand, the series took a different approach to its sometimes serious content. For the most part, A Simple Murder was delightfully well done that one couldn’t help but applaud at its writing and performances.

Next in line is the crime drama series. How is this one different? This one is having a traditional approach towards good and evil. For a change, the protagonist was a good cop fighting against the crime. Swara Bhasker played an impressive lead role here. The flesh was quite graphic and gory in its representation of human trade. Still, with its use of revolting visuals, the show drove the point homeland also gain appreciation from the audience.

Jeetendra Kumar in this TVF series had a simple premise. We have often witnessed that in web content, it is usually simplicity that steals the votes and wins the heart. The cast of the show was already very likable. The best part about Panchayat was its casting supported by Raghubir Yadav, Neena Gupta, and Chandan Roy. Panchayat was released during the lockdown, and the script and joint efforts of the team left the audience feeling a little warm and fuzzy.

The Gone Game was a unique effort by the creators and actors and was filmed during the lockdown. There was an exceptional usage of technology, including zoom call, text messages, and it was brilliant and even better than many shows made with all the resources at hand. While Gone Game wasn’t having an extraordinary story and writing department, it more than made up for it by effectively translating to the screen the paranoia that had consumed us during the coronavirus-induced lockdown.

At number 10, we have Asur, a combination of the genres of mythological fiction and thriller. That is seen in its larger-than-life theories, but its significance wasn’t communicated well enough. Asur also faltered when it came to tying up loose ends by the end of the season. Despite some faults, Asur starring Arshad Warsi ruled the hearts and television screen with 10th position of top web series in India.