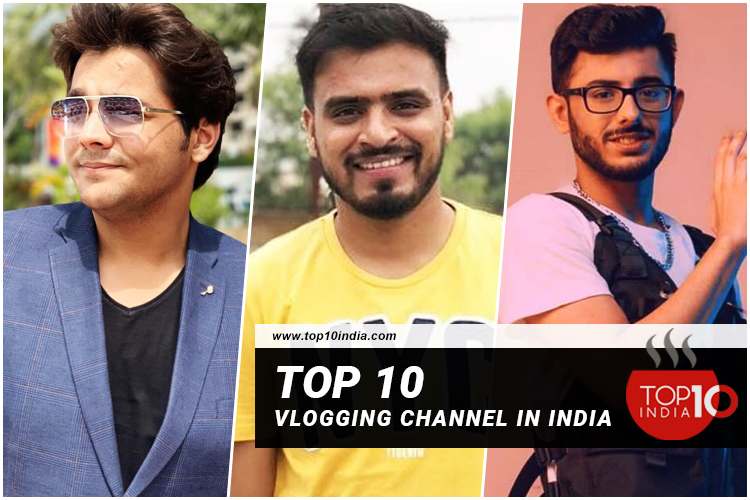 Top 10 Vlogging Channel in India | Famous Indian Vloggers on YouTube: A video blog or a vlog is certainly the most personal way to interact with people on a social media platform. Content creators use vlogs as a medium of establishing a bond with their followers. Vlogging is becoming very popular after social media platforms Youtube, Facebook, and Instagram have included live streaming. One of the vital and crucial features of the vlogs is redefined the relationship between the leader and their follower. Vloggers provide great help by giving a review of any product/service or maybe telling the viewers about their traveling experience in a video. In this pandemic, people are moving to this profession of vlogging and are doing really well.

To rule our chart is Ajey Nagar, running the famous channel named Carry Minati. This 21-year-old vlogger from Faridabad, Haryana. He started his YouTube journey in October 2014. The channel currently has a total subscriber of 29.8 Million. Initially putting games video and mimicry videos. Then he gradually moved to make roast vlogs on his channel, which made him widely popular among teenagers and millennials. After the controversy of tik-tok and YouTube, Carry Minati has gained a whole fan base. He also has a secondary gaming channel named- CarryIsLive.

Next, here we have a comedy vlog channel handled by Amit Bhadana. Channel is named after his name only- Amit Bhadana, currently with a total subscriber of 21.3 Million. Amit is a 26-year-old and belongs to Bulandshahr, Uttar Pradesh. He started his career as a vlogger in March 2017 and has garnered 1.7 billion views on his channel. He only creates comedy vlogs on his channel with a very distinctive accent, which adds another comedic element to his content. His videos have featured many A-list celebrities such as Akshay Kumar, Ajay Devgn, and Parmish Verma.

Ashish Chanchlani, with a total subscriber of 20.54 Million, runs a Youtube vlog channel named ashchanchlani. In just 26 years of age, he has gained a huge fan base. He is from Ulhasnagar, Maharashtra. He started his journey as a vlogger in December 2014. Hit his 1 million subscribers in July 2017 and 20 million subscribers in August 2020. He won the Dadasaheb Phalke International Film Festival Award in 2018 for best Digital Influencer. Ashish is famously known for his hilarious dubs of random Bollywood movie scenes. Celebrities including Akshay Kumar, Kartik Aryan, and Shahid Kapoor have worked with Chanchlani to promote their movies.

Multi-talented Bhuvan Bam is on number 4 in the list of top 10 vlogging channels in India, runs his vlogging channel named after him- Bhuvan Bam having a total subscriber of 19.1 million. Bhuvan Bam, more popularly known as BB, is of just 26 years of age and is a full packet of entertainment. He is a comedian, singer, songwriter, and of course, YouTuber from Delhi, India. Started his career as a vlogger back in June 2015. The concept of creating his videos is by taking a comedic take on the everyday happenings around an urban teenager. The videos are shot by Bam himself on his phone front camera. Not only this, Bhuvan Bam became the first solo Indian creator to hit 10 million subscribers in 2018.

A trio ruled at place 5 in the list with the channel Round2Hell. Channel handled by three friends- Zayn Saifi, Wasim Ahmed, and Nazim Ahmed from Moradabad, Uttar Pradesh. Currently has 15.5 million. They began their journey in November 2016 and by then have gained 1.44 billion channel views. They create comedy and entertainment vlogs on the day-to-day life events of teenagers and millennials.

Bilal Shaikh, popularly known as Emiway, is a 24- year- old vlogger, having a total subscriber of 12.2 million. He is an independent rap artist and music vlogger on YouTube from Bangalore, Karnataka. Emiway began his musical career and YouTube career together in May 2013. When he uploaded his very first original rap song to YouTube, and since then, his channel has garnered 1.7 billion views. He won awards, including the Radio City Freedom Award in 2016 and the People’s Choice Award for the Best Hip Hop Artist in 2017.

Next in line is a food vlogger Nisha Madhulika. She is a 60- year- old chef and a food vlogger from New Delhi, India. If you had made dishes at home during the lockdown, you must have seen her in at least one of the videos. She has pretty much become a household name in India. Nisha began her YouTube journey way back in May 2011 and has continuously managed to gain love and respect for her cooking ever since! Currently, the total subscriber on her channel is 10.2 million. Her food vlogs mainly focus upon vegetarian Indian cuisine ranging from snacks to delightful desserts. One can literally find anything to everything on her channel!

A fashion vlogger from Jhansi, Madhya Pradesh, Shruti Arjun Anand with a total subscriber of 8.14 million. The 34-year-old fashion vlogger went on to create comedy and entertainment vlogs as well on her channel, and by just one look, you can tell all about her. She started his career in March 2011, and she is one fierce, life-loving girl. Shruti has managed to win many hearts through her amazing vlogs and relatable content.

Music vlogger Vidya Vox currently has a total subscriber of 7.04 million. Vidya Iyer, better known as Vidya Vox, is a 29- year- old music vlogger hailing from Chennai, Tamil Nadu. She began her YouTube journey in 2015 by uploading mash-ups of Bollywood and Hollywood songs, bringing together influences from her Indian- American heritage, which made her wildly popular. She also shares her original music on her music channel.

As said the above list of vlogging channel consist artist from the various domain. And their hard work and honesty, and of course, the love and support of the audience, have made them reach this platform of success. This list showcases the top 10 vlogging channels loved and appreciated in India. Does your favorite vlogger make up to the list? If not, then don’t worry. They will someday be here, but till then, keep supporting them. As they work hard for your support and love, so keep supporting and loving them.