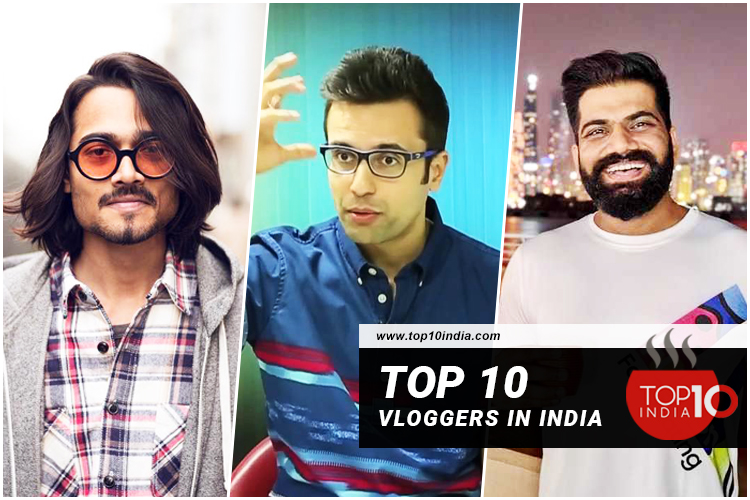 Top 10 Vloggers In India | Famous Popular Indian Vloggers: Having over 265 million YouTube users, India is unbelievably the fastest-growing market for the vlogging platform in terms of the number of users, generating billions of views every day. So, let us focus on whom these millions of people are watching on YouTube. That gives us the answer to the most popular channels in India and who the most loved vloggers?

Here presenting the list of the top 10 Vloggers In India who have made their mark in the heart of their audience and will continue doing it in the coming years. Let’s get started.

The first name that comes to our minds when we talk about a vlogger in India is Bhuvan Bam. he has proved to the world that platforms like YouTube can change one’s life completely. It only takes to have the talent and power of good content. He is the first Indian solo YouTuber to reach 10 million and then 15 million subscribers and is unstoppable. He has started producing songs and short films, and it would be interesting to see what he comes up with within the coming year.

Next in line is India’s best motivational speaker, Sandeep Maheshwari. The way he interacts with his 16 million subscribers about life is so unique and amazing. He talks about life, careers, maintaining some core values no matter what, relationships, building confidence, and many more. Sandeep Maheshwari is doing really well and helping people see life differently and hopefully grow much more in the coming year.

Gaurav Chaudhary or popularly known as Technical Guruji with 18 million subscribers. He is light years ahead of the other tech-related Vlogger on YouTube. Many people who follow him on the platform trust his words and have bought many things depending upon his review of the product.

The vlogger alone or sometimes with the set of his friends create such hilarious vlogs that undoubtedly made Ashish Chanchlani popular for his slapstick comedy sets. He is amazing at his work, which makes him popular among the youth, specifically in the entertainment industry. He has been the host for some of the shows and soon will be going to achieve more heights.

21-year-old sensational YouTuber Ajey Nagar also known as CarryMinati, is a successful vlogger in India. Having more than 26 million subscribers on YouTube at such a young age is commendable. Carry Minati originally belongs to Faridabad, Haryana, and is very famous for his controversial roasting videos and rapping. He initially started his work by using YouTube merely at the age of 10 and has started pursuing it as a full-fledged career after 13 years old. Just like his unique name, he is also entitled to a unique achievement. Ajey Nagar is named among ‘Next Generation Leaders 2019’ by Time Magazine.

Amit Bhadana has become a famous name, especially in North India, Haryana. He is popular because of his vines and sets in a perfect representation of how people behave in that particular area. Revolving majorly on the day-to-day basis life of people there. A new initiative in his videos is to discuss social issues through his vlogs, and he believes it’s his responsibility to do this little act of kindness and let people think about it too. Apparently, this all has worked in his favor, and he becomes the YouTuber with the highest number of subscribers in India and got over 20 million subscribers.

People searching and cooking must definitely have come across the trendy name Nisha Madhulika. At the age of 60, with over 8 million subscribers, she is the best female youtube vlogger in the country. Her vloggers are very informative and easy to understand; many people learn to cook some tasty food and recipes by watching her videos.  Being a popular food vlogger Nisha Madhulika has come a long way and has made a place in people’s hearts by letting them learn to make delicious food.

Female making vine is very much underrated in India. But the next on our list had proved it all wrong by being one of the hilarious female vine vlog creators on YouTube. She is Prajakta Koli, and due to her rising popularity, she has been part of various collaborations already, and the coming year will surely bring her more. There is a long way to go for Prajakta Koli, and being a vlogger has given and will give her a lot of love from her subscribers.

On number 9 of the top 10 vloggers in India for 2020 is Gaurav Taneja. Gaurav has two fastest-growing YouTube channels, namely Flying Beast and FitMuscleTV. While the initial one is for his travel vlogs. The other one is a complete fitness vlog. An ex-IITian, Gaurav focuses on the science behind fitness, which has led to his great popularity.

There is no one more popular when it comes to travel vlogging on YouTube than Nikhil Sharma, popularly known as Mumbiker Nikhil. His editing style and the off-beat places he travels to make him so popular among the masses. Travel vlogger has an extremely high fan base as people want to experience the places vlogger is exploring. As it is said with the vlogger, their audience visits that place too.

After reading and going through this list, you have known that there is an audience for every content people are creating. Being a vlogger in India can take you from nowhere to the best place in your life. If the content created by the creator is of high quality and by using the right marketing strategies, vloggers will find their right audience and gain the popularity they always wanted to. Did your favorite vlogger was able to make up to that list? It’s great if they do, and if not, they soon will be here. Several vloggers are going a commendable job, and surely they will be successful one day.