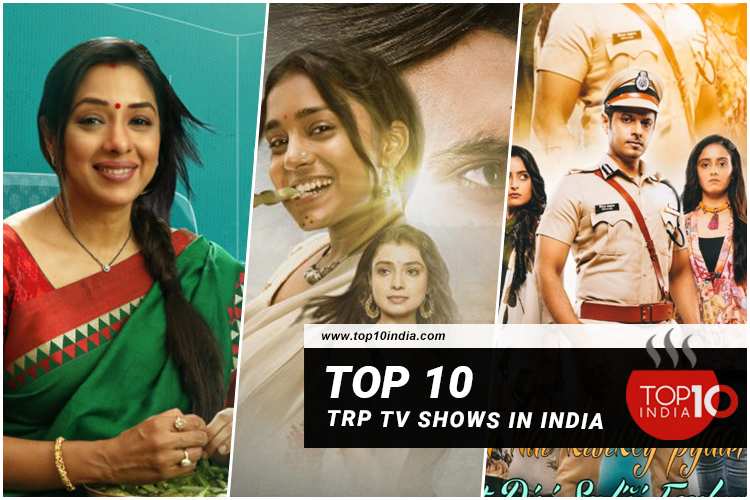 Top 10 TRP TV Shows In India | Highest Rated TV Serials: India has hardly produced any show by self-thinking. Most of the shows we see have already been telecasted elsewhere. Still, by injecting new ideas and giving them a desi touch, Indian shows have come far. TRP is used to measure how many people/audiences watch a particular TV show in a specific time interval.

This serial was premiered on 13 July 2020 on Star Plus, a remake of the star Jalsha’s Bengali Series Sreemoye. Rupali Ganguly is in the role of Anupamaa. The story of this serial is Anupama, a devoted housewife, mother, and daughter-in-law who loves her family and fulfills all their needs while ignoring her own.  Bereft of the equivalent love and respect in her house from her own family, she realizes the bitter truth and sets out to live her life on her own terms. Her husband is having a relationship with another girl Kavya which is very disheartening for Anupama.  In the 10th week of the year, viewers have given their love to the show and made it the highest-rated show on the TRP list.  This show dominates the TRP charts for many weeks, and fans are in love with the divorce track going on in the show. The show has earned more than 3 million viewership impressions in week 15.

It is an Indian television show that premiered on 16 November 2020 on Star Plus; the series is the remake Bengali series Ishti Kutum. The main Stars of this how are Sumbul Tougeer Khan, Mayuri Deshmukh, and Gasmeer Mahajan. It has second place in the list of top5 TRP shows, having more than 2.5 million viewership impressions. The show’s story is about the famous journalist Aditya from Delhi who visits Imlie’s village to interview Satyakam Dadda. Due to a stormy night, Image was forced to stay in a cottage with Aditya. Although they both are innocent, the locals forced them to marry each other. But Aditya is previously engaged with his girlfriend, Malini, in the city. But later on, Aditya refuses to marry her and asks Imlie to decide what she wants to do. Imlie better knows that he is not in the mood to accept her as a wife, and she is liable for him. But later, circumstances forced Aditya to take Imlie to his home.

This is an Indian Hindi television show that premiered on 5 October 2020 on Star Plus. This show is a remake of the Bengali series Kusum Dola. The main stars of this show are Neil Bhatt, Ayesha Singh, and Aishwarya Sharma. It stands on number 3 in the list of top 5 TRP shows in India. This show has earned around 2.5 million viewership impressions. The directors of this show have been coming with different twists and turn in the show to keep the audience entertained and curious about the upcoming episodes. The show’s story is a serial that portrays the love triangle between Virat, Sayi, and Pakhi. Virat has to make between his love and duty and is forced to get married to Sayi under certain circumstances. Sayi’s father dies and takes a promise from Virat to take care of his daughter always. However, he has been in love with Pakhi but can’t break his promise as well.

It is an Indian Hindi Television show that premiered on 12 January 2009. It is the fourth-oldest running Indian Television show. Actors Shivangi Joshi and Mosin Khan are in ‘Naira’ and ‘Kartik.’ This shows airs on Star Plus from Monday to Friday at 9:30 PM. The show has more than 2.1 million viewership impressions. It stands on number 4 in the list of top 10 TRP shows in India. The story of this show is Naitik and Akshara; both are from large Marwari joint families living in Udaipur, get married through an arranged marriage. After marriage, they struggle to know each other and gradually understand, love, and support each other. They soon give birth to a son, Naksh.

It is and romantic drama television series created by Ekta Kapoor; it has been broadcast on Zee TV since 12 July 2017. This show had made come back in the list of the top 5 TRP shows in India. This show is starring Shraddha Arya, Dheeraj Dhoopar, and Manjit Joura. The story of this show revolves around the two sisters of Pragya; her sisters are Preeta and Shrishti, who discover the existence of their mother Sarla and Sister Pragya after their father’s death. The sisters try to unite with their mother and sister. This show airs on Zee TV from Monday to Friday at 9:30 pm. It is having a BARC (TRP) ratings of 7337.

It is an Indian television series that premiered on 1 July 2019 on Colors TV. Stars of this show are Nimrit Kaur Ahluwalia (Meher), Kevina Tak (Param), and Avinesh Rekhi (Sarabjeet). It is one of the top 10 TRP shows in India. The story of this serial is Gulwand; Meher’s mother is a strong-willed woman who wants to become a minister someday. Being the mukhiya of her village and an orthodox lady who likes to control her family members. Comparing to her mother, Meher is a simple, happy girl. Manav is a caring, Humble, and doting boyfriend of Meher, who loves her a lot. He wants to become an IAS officer and works in a Dhaba to earn his livings. Based on the Choti sardani serial spoilers, Meher and Manav’s cut love story comes to light when Gulwand fixes the wedding with Sarabjeet.

It is one of the longest-aired sitcoms in India. It premiered on 28 July 2008.  This show airs on Sab Tv every Monday ton Friday at 8:30 PM. It is having a BARC (TRP) ratings of 2.2. Main characters of this show Dilip Joshi (Jethalal), Neha Mehta (Anjali Mehta), Kavi Kumar Azad (Dr. Hansraj Hathi), and many more. This show is having a huge fan following in India. The show’s plot is that residents of a Cooperative housing society help each other find solutions when they face common real-life challenges and get involved in sticky situations.

It is a dance reality show that airs on the Sony Entertainment Television channel. It is one of the top 10 TRP shows in India. Judges of the show are Remo D’souza, Nora Fatehi, Terence Lewis, and Geeta Kapoor. The hosts of the show are Bharti Singh and her husband, Haarsh Limbachiyaa. This show has entertained the viewers with amazing dance skills and talent. This show is a dance reality platform for dancers between the age group of 15-30 years. This show will showcase the journey of some of the best talent who, with their solo performances, will compete to win the title.

It is a reality show based on Dutch Big Brother that John de Mol developed. It airs on Colors Television Channel on weekdays, Saturday and Sunday. The show’s plot is that several contestants live in a specially constructed house that is isolated from the rest of the world. Housemates are voted out weekly; the housemates who receive the most nominations face a public vote. In the final week, three housemates are remaining, and the public votes for them whom they think should win the show according to the performance. The one voted by the public wins the show title and cash prize. This showed loved by the Indian public a lot.

It is a dating reality show that airs on MTV Entertainment Television channel every Saturday at 7 PM. It is among the best shows that people in India love to watch. Initially, it was hosted by Nikhil Chinapa, but now it is being hosted by Ranvijay Singh and Sunny Leone. The basic plot of the show is that young men and girls try to find their partners. Finding the perfect partner is not that easy as the show’s contestants have to go through several rounds of challenging tasks. The pair that survives become the winner and gets the title. Currently, it has completed 13 seasons.