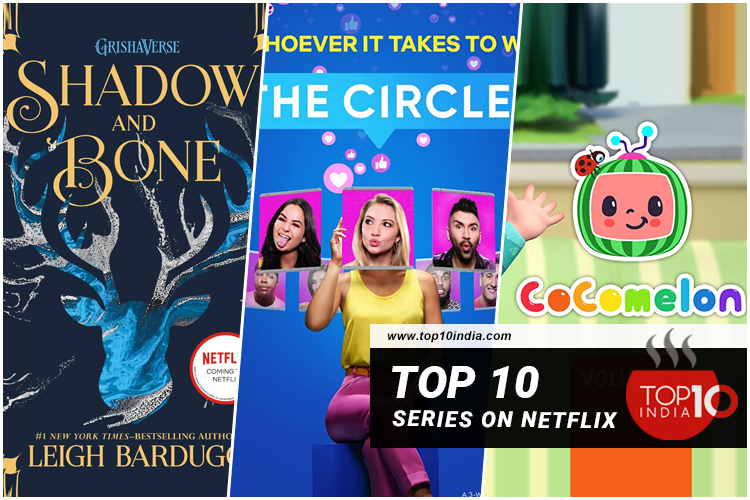 Watch Now Top 10 Series On Netflix | Popular Web Series: Want to know the Top 10 series on Netflix currently? If so, then you are in the right place! Although the trending list of the series was provided earlier this year. But it is still not easy to precisely know which series topped we’re here to help streamline that process.

Check out the Top 10 most popular TV shows on Netflix list below, along with a summary of just what it is that everyone’s watching.

It’s a recreation of Leigh Bardugo’s worldwide bestselling Grishaverse novels, Shadow and Bone. The story starts from a war-torn world where a lowly soldier and orphan Alina Starkov. Alina Starkov has just got an extraordinary power that could be used to set her country free. With the heinous threat of the Shadow Fold looming, Alina is torn from everything she knows to train as part of an elite army of magical soldiers known as Grisha. But as she struggles to hone her power, she suspects that allies and enemies can be the same and that nothing in this lavish world is what it seems.

There are presences of dangerous forces at play, consisting of a crew of charismatic criminals, and it will take something more than just magic to survive. Shadow and Bone is a Netflix original and is produced by 21 Laps Entertainment. The cast starring Jessie Mei Li (Alina Starkov), Archie Renaux (Malyen Oretsev), Freddy Carter (Kaz Brekker), Amita Suman (Inej), Kit Young (Jesper Fahey), and Ben Barnes (General Kirigan).

Whether you have seen the first season or not, you should watch the second season of The Circle. It returns better and bigger, having more twists, turns, and shade thrown in all 13 episodes! A total of 8 contestants enter The Circle, where they get to flirt, befriend, piss off each other. They all compete against each other to be the top contestant on a unique social media platform to earn a huge cash prize and be a top influencer. Having $100k on the line, will they be able to earn clout and figure out who is real and who is fake? The Circle social media competition and is a four-week must-watch. The Circle aired on April 14 and continued with new episodes on April 21, 28, and finale on May 5th.

Having babies is great sometimes; it becomes difficult handling them. Cocomelon is one of the shows which helps the kids to learn letters, numbers, animal sounds, and more with J.J in this musical series. Cocomelon tends to bring fun time with nursery rhymes for the whole family! You can enjoy it with your child and help it do help your child learn easily. The story is set up in Cocomelon, where baby JJ and his siblings go on fun everyday inventions. With play exploration nursery and learning situations that a preschooler could relate to. Overall it has fun, relatable stories set to toe-tapping songs. It was originally aired in 2019, giving it a great opportunity to be seen by kids in this pandemic and keep them busy for some time. Aired 2019

At the position, 4th has the Israeli romantic comedy series, the Baker and the Beauty, as it is originally Israeli rom-com series, where a blue-collar baker strikes up a relationship with an international model. This series has got two seasons and the second season premiered on May 9th, 2017. The series takes a comical approach to Jewish ethnic divisions in Israel by exploring the relationship between the privileged International and working-class Baker as a love interest. Netflix has got the U.S version of this rom-com, and you can watch both seasons there if you are someone who loves this combo of romance and comedy, you know what to binge-watch next!

Yasuke is a 6 episode series created by LeSean Thomas. It is set in an alternative fantasy world of Japan during a feudal era. The story is about some samurai people of African descent who should come back to his life of weapon and violence to guard a mysterious woman from the dark forces.

Next on our left is the show being premiered this Earth day, Life In Colour with David Attenborough. In this three-part series, the lead actor David travels the world from the rainforest to Costa Rica to the snowy Scottish highlands to reveal the extraordinary and never been seen ways animals use color. Using camera technology revolutionary for this series, it would be delightful for the viewers to watch and experience how colors invisible to the human eye play an important role in animal interactions, from the seemingly magical ultraviolet signals on a butterfly’s wings to the surprising yet crucial purpose behind a Bengal tiger’s stripes. The series projects a hidden world of color that is waiting to be discovered.

Quadruplets story, showing sibling bond highlighting love and rivalry between 11-year-old Nicky, Ricky, Dicky, and Dawn Harper. It was originally aired on nickelodeons. Later, Netflix also started showing it. The last episode aired on 4 August 2018. It is still getting all the love from children. That is the reason that it is still on the top 10 series of Netflix’s list.

Angsty and awkward fifteen-year-old Ginny Miller usually feels a lot more mature than her thirty-year-old mother, the irresistible and dynamic Georgia Miller. After years on the run, Georgia urgently needs to place down roots in picturesque New England. She provides her family with one thing they’ve never had… a standard life. However, it isn’t all carpool and Kombucha as Georgia’s past threatens her and her family’s new approach to life, and Georgia can do anything to guard her family.

Posing as a gem dealer, Charles Sobhraj and his girlfriend, Marie-Andrée Leclerc (Jenna Coleman), cosmopolitan across Thailand, Nepal, and India in 1975 and 1976. Concluding a spree of crimes on the Asian ‘Hippie path,’ turning into the chief suspects in an exceedingly series of murders of young Western travelers. When Herman Knippenberg (Billy Howle), a junior diplomat at the Dutch Embassy in Bangkok, unknowingly walks into this involved internet of crime, he – with the assistance of his partner Angela (Ellie Bamber), police round the world and witnesses of Sobhraj’s devious manipulation it generates an unprecedented chain of events which will see Sobhraj become Interpol’s most wanted man, with arrest warrants in multiple continents. The plot is impressed by a real story, but all dialogue is fictionalized.

Sexify is amongst the various new releases that are coming to the streaming platform this month. This is a title that stands out from the remaining. With such a remarkable title, you’re most likely curious if the show will be going to be even as intriguing.

Sexify shows a group of friends who come together to make an app that properly educates individuals regarding women’s sexual experiences. These ladies have to be compelled to collect information so as for their app to achieve success. The only way to do so is to raise difficult questions to ladies all over. Determined to interrupt society’s uncomfortableness towards talking regarding ladies and sex. Natalia, Monika, and Paulina explore the massive world of gender.

The show has a cool line-up of actors, including Aleksandra Skraba as Natalia, Maria Sobocinska as Paulina, and Sandra Drzymalska as Monika.

It’s a woman power like you’ve never seen before. Perhaps, Natalia and Maeve would make good friends as they combine ideas.

This week’s top 10 on Netflix, Shadow and Bone, crowned as it is at position one. At the same time, social media reality shows The Circle moves to number two. Following that is the rom-com The Baker and the Beauty. Having thriller The Serpent, Nickelodeon family comedy Nicky, Ricky, Dicky, and Dawn. Nature series Life In Color With David Attenborough. Mainstay Ginny and Georgia are still making their way on the chart of top Netflix series. Netflix to have a new entry this week, which is a polish comedy about friends developing a sex app, “Sexify.” As well as the Yasuke, an animated samurai tale featuring the Oscar-nominated LaKeith Stanfield as the titular warrior. And it too has got all kid-favorite Cocomelon.

There are undoubtedly many other brilliant series to watch but for now above discussed are ruling the charts on Netflix.