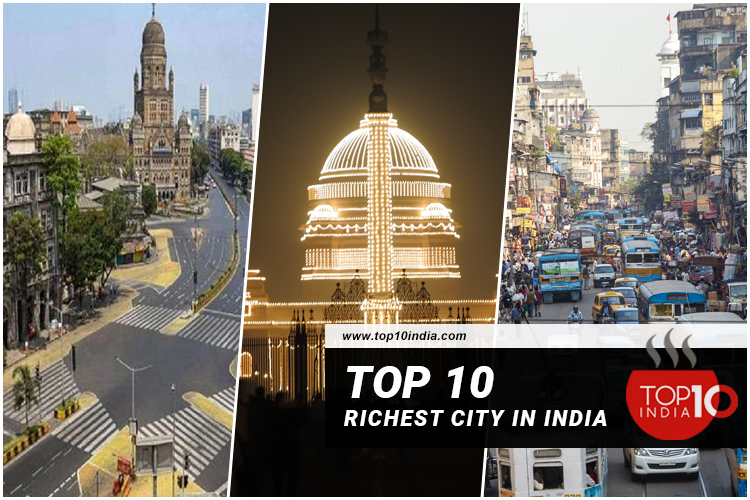 Top 10 Richest City In India: India is a diverse country with 29 different states and 9 Union territories. They all have different cultures, monuments, art, and languages. Whatever you want, you can find it in India. Every city in India has a different industry and much more to offer the tourist. India is a growing country, and many of its cities have a successful GDP rate. Different domestic and international tourists visit these cities and have remarkable experiences.

If all the cities of India continue to perform better and generate revenues like the below-mentioned cities, then it is not far that India becomes a developed country. As technology is increasing the scope for new sectors, expansion is also increasing. Now India is producing multiple products of its own without exporting. Here is the list of the top 10 Richest City In India.

The national capital of India, Delhi, is the second richest city in India. The city has an amazing infrastructure which includes a different business center, Delhi metro, International Airport. The total GDP of New Delhi is $293.6 billion.

Kolkata is the cultural capital of India. Kolkata is famous for its culture, art, music. One of the most famous parts of Kolkata is the yellow taxi. The city is among the richest city in India because of multiple industries. The GDP of Kolkata is $150.1 Billion.

Bengaluru is the Silicon Valley of India and the most advanced state in India that has a GDP of $110 billion. It is also the capital of Karnataka. The city has an amazing GDP because of its IT sector, architecture.

Chennai is also called as Detroit of South Asia. It is also most advanced in india. Chennai has $78.6 billion as its GDP. Chennai is known for its culture, economy, and education. It is ranked 6th in the list of the richest city in India.

Hyderabad is also known as the city of pearls. Hyderabad has a GDP of $75.2, which is mostly generated by the pearl industry. The city is also famous for its Hyderabadi Biryani.

Pune is known for its educational institutes and has a GDP of $69 billion. The city has very pleasing weather. It has wide history, landscapes which makes it visually beautiful and attractive.

Textile Hub of India, Ahmedabad, has a GDP of $68 billion. It is the capital of Gujrat and also known as Manchester of the East, as the majority of its GDP is generated from textile. The city has a wide variety of monuments, temples, and buildings.

The city of Sun, Surat is having a GDP of $59.8 Billion. It is another richest city from Gujrat. The place has a large number of merchants visiting Surat. The city is located at the mouth of the Tapti River. The city generates most of its revenue from Diamond and textile.

Visakhapatnam is situated on a coastal line and is the largest city of Andhra Pradesh. Visakhapatnam has a GDP of $48.5 Billion. The place has amazing beaches, landscapes, a heritage that is historical for a long time. It is the last city on the list of the richest cities in India.

1. Which is the richest state in India?

Mumbai is the richest state in India in terms of its GDP.

2. Which is the most developed city in India?

New Delhi is the most developed city in India.

Bengaluru is the No 1 city in India as it has amazing weather, It sector with a lot of jobs. It is a smart city.

4. What is the third richest city in India?

Kolkata is the third richest city in India.

Published in A to Z, Destination, News and Social