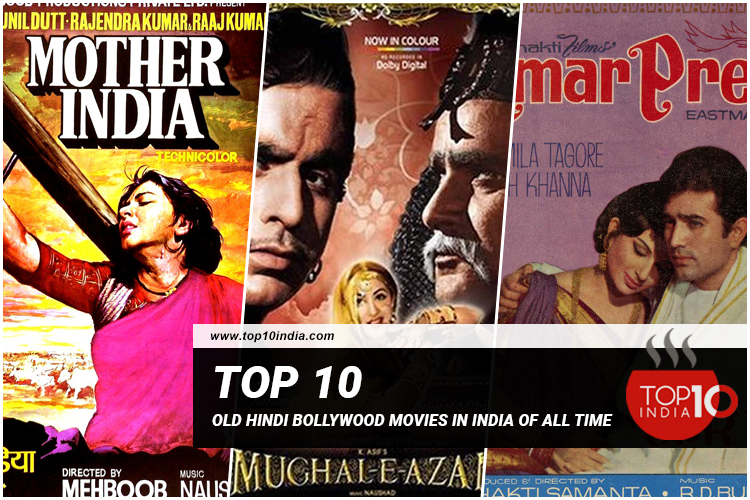 Top 10 Old Hindi Bollywood Movies In India of All Time

Top 10 Old Hindi Bollywood Movies In India of All Time:- The 1990s was an amazing decade for Hindi movie buffs. The comedies were funny, the romance felt mushy, and the music was to die for. We have grown up watching these films on our television sets, and they have become the comfortable cushion that any Bollywood buff can fall back on.

Top 10 Old Hindi Bollywood Movies In India of All Time

Here’s the Top 10 Old Hindi Bollywood Movies In India of All Time from the 90’s that you can relax with any given weekend. There is nothing like a classic film to lift your spirit and keeps you entertained, and these great movies represent the best Bollywood has to offer. I hope that my selection is the one you would make as you select the best Bollywood as you remember.

Mother India is a 1957 Indian epic drama film directed by Mehboob Khan and starring Nargis, Sunil Dutt, Rajendra Kumar, and Raaj Kumar. The film’s title was taken to counter the American author Katherine Mayo’s 1927 polemical book mother India. This film was the most expensive Hindi cinema production and earned the highest revenue compared to any Indian film at that time. This is on the first position in the list of Top 10 Old Hindi movies.

Mughal-E-Azam is a 1960 Indian epic historical drama film directed by K.Asif and produced by Shapporji Pallonji and The movie starring Dilip Kumar, Madhubala, and Prithviraj Kapoor. This movie shows the love affair between Mughal Prince Salim and Anarkali. It broke the Box Office record in India and became the highest-grossing Indian film.

Amar Prem is a 1972 Indian Romantic Drama film directed by Shakti Samanta. It is a remake of the Bengali film Nishi Padma(1970). Its music by R.D. Burman notices the film. The movie starring is Sharmila Tagore, Rajesh Khanna, Vinod Mehra, Abhi Bhattacharya, and Madan Puri.

Anand is a 1971 Indian Hindi language drama film Co-written and directed by Hrishikesh Mukherjee. Rajesh Khanna in the lead role, with a supporting cast including Amitabh Bachan, Sumita Sanyal, Ramesh Deo, and Seema Deo. It has since gained a cult following and is hailed as one of the greatest Hindi films ever made.

Angoor is a 1982 Indian Hindi Language comedy film starring Sanjeev Kumar and Deven Verma in dual roles and directed by Gulzar. All character play innocent and destiny play the main role in bringing all characters at one place. IndianWeekly released the DVD version of the film under its own label.

Sholay is a 1975 Indian action-adventure film written by Salim-Javed, directed by Ramesh Sippy, and produced by his father, G.P. Sippy. Sholay is considered a classic and one of the best Indian films. It was ranked first in the British film institutes 2002 poll of ”top 10 Indian films” of all time. The film Dharmendra, Amitabh Bachchan, Sanjeev Kumar, Amjad Khan, Hema Malini, and Jaya Bhaduri.

Bobby is a 1973 Indian Hindi-language musical romance film, produced and directed by Raj Kapoor and written by Khwaja Ahmad Abbas. The film stars Raj Kapoor’s son, Rishi Kapoor, in his first leading role, Opposite Dimple Kapadia in her debut role. The film became a blockbuster, the top-grossing Indian hit of 1973 and the second top-grossing hit of the 1970s at the Indian box office.

Golmaal is the most entertaining movie.

2. Which is the most romantic movie ever?

Bobby is the most romantic movie ever.

3. Who is the thriller and action movie?

Agneepath and Sholay is a thriller and action movie.

4.  Which movie is the all-time favorite?

Yaarana and Mother India is the all-time favorite movie.