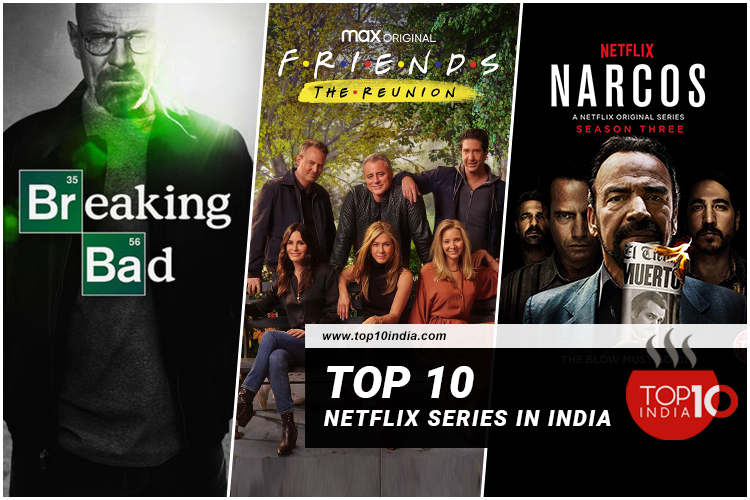 Top 10 Netflix Series in India:- In the world of Entertainment, everyone loves to watch movies and videos. A Movie, also known as Film, is an art (visual) consist of stories, perceptions, various feelings, and ideas. Nowadays, online videos and entertainment are gaining a wide attraction all around the Globe. A web series are online videos that are released on the online platform in an episodic formation. Below is the list of the top 10 Netflix Series in India.

There are so many options for online entertainment platforms in India. Some popular applications and websites are Netflix, Voot, Amazon Prime Videos, Zee5, Bigflix, Hotstar, Alt Balaji, Sony Liv, etc. Today we will discuss some top 10 Netflix Movies in India 2021. We have classified these WEB Series based on their IMDB ratings in India.

Breaking Bad is in the first position in the list of top10 Netflix series in India. It is an American neo-western crime drama Television series released on AMC from 20th January 2008 to 29th September 2013. There is a total of 62 episodes in the 5 Blockbuster seasons. In this web series Breaking Bad follows Walter White, who is a high school chemistry teacher. He transforms into a ruthless player in the local methamphetamine drug trade, driven by a desire to financially provide for his family after being diagnosed with terminal lung cancer. It receives a 9.4 IMDB rating on the Netflix originals.

Friends are the other popular web Series in the list of top 10 Netflix Series in India. It is an American television sitcom released on NBC from 22 September 1994 to 6 May 2004. There are 236 episodes, with an extra episode of Friends: The Reunion in the 10 Blockbuster seasons. This web series shows the college friendship life that attracts the youngsters towards it. Friends is a TV show based in Manhattan. It is about 6 friends who go through just about every life experience together; love, marriage, divorce, children, heartbreaks, fights, new jobs, job losses, and all sorts of drama. It receives an 8.9 IMDB rating on the Netflix originals.

Narcos is one of the best entertaining web series on Netflix originals in India. It is an American Crime Drama television series based on the story of drug kingpin Pablo Escobar. He is involved in the production and distribution of cocaine and becomes a billionaire. Season 1 and 2 are about the rising of the dealer Pablo Escobar and Season 3 is about the downfall of Pablo Escobar and follows the Drug Enforcement Administration as they shut down the rise of Cali Cartel. There is a total of 30 episodes in the 3 Blockbuster seasons.

Stranger Things is one of the entertaining web series on Netflix originals in India. It is an American Science Fiction Horror drama television series. The series premiered on Netflix on 15 July 2016. This Web-series is awarded as Screen Actors Guild Award for Outstanding Performance by an Ensemble in Drama Series, two American Film Institute awards. There is a total of 25 episodes in the 3 Blockbuster seasons.

Sacred Games is an Indian crime thriller streaming television series. This web series is based on Vikram Chandra’s 2006 novel of the same name. Sacred Games shows the city’s intricate web of organized crime, corruption, politics that lie beneath India’s economic renaissance. In this series, Sartaj Singh is a Police Officer in Mumbai who receives a phone call from the gangster Ganesh Gaitonde, who tells him to save the city within 25 days. It is India’s first Netflix original series with 8.6/10 IMDB ratings. There is a total of 16 episodes in the 2 Blockbuster seasons.

Sex Education is a British comedy-drama television series released on 11 January 2019 on Netflix. It is an instruction of issues relating to human sexuality that includes emotional relations and responsibilities. This is a series of events in which Otis is a sex therapist in a school for his fellow high students. Maeve Wiley recognizes this. The film uses the sex therapy theme to introduce classmates of Otis and Maeve. The film is really a high school ‘Coming of Age’ story. It is a Netflix original series with 8.4/10 IMDB ratings. There is a total of 16 episodes in 2 seasons.

Money Heist is a Spanish Heist crime drama television series and the most popular series in India. This series is originally titled “La Casa de Papel,” about the two long well-prepared heists led by the professor. This original Netflix series traces the Professor, a criminal mastermind, bringing eight thieves together to take hostages and lock themselves in the Royal Mint of Spain. He manipulates the police to carry out his plan and in the Bank of Spain. It is a Netflix original series with 8.3/10 IMDB ratings. There is a total of 31 episodes in 2 seasons or 4 parts.

The Witcher is a Polish-American fantasy drama streaming series based on a book with the same name, which Polish writer Andrzej Sapkowski writes. This web series is about the Geralt of Rivia, Crown Princess Ciri, and the sorceress Yennefer of Vengerberg at different points in time. It explores formative events that shaped their characters before eventually merging into a single timeline detailing the invaders from Nilfgaard. It is a Netflix original series with 8.2/10 IMDB ratings. There is a total of 8 episodes in only 1 season.

Lucifer is an American Urban Fantasy Superhero television series. This web series is based on the DC Comics character named Vertigo. Based on Neil Gaiman, Sam Kieth, and Mike Dringenberg, Lucifer is the story of the original fallen angel. Bored and unhappy as the Lord of Hell, Lucifer has abandoned his throne and retired to L.A., where he owns Lux, which is an upscale nightclub. It is a Netflix original series with 8.1/10 IMDB ratings. There is a total of 75 episodes in 5 blockbuster seasons.

Last but not least, YOU is in the tenth position in the list of top 10 Netflix series in India. It is an American psychological thriller television series. YOU is based on the 2014 Novel written by Caroline Kepnes. This web series follows the story of Joe Goldberg, who is a bookstore manager in New York. He is an aspiring writer and becomes infatuated with her. He feeds his toxic obsession using social media and other technology to track her presence and remove obstacles to their romance. It is a Netflix original series with 7.7/10 IMDB ratings. There is a total of 20 episodes in 2 blockbuster seasons.

Q- Which is the most viewed Netflix Series?

Bridgerton is the most viewed series with 82 million views on Netflix.

Q- Which is the most viewed Netflix Show in India?

The popular thriller movie of Nawazuddin-Radhika Apte, “Raat Akeli Hai,” is the most viewed in India.

Q- Which is the Best movie on Netflix in India?

Army of the dead is considered the best movie on Netflix in India.

Q- Which is the most Successful Film ever?

Gone with the Wind is considered the most successful film ever, with a Global collection of $3.4 billion.