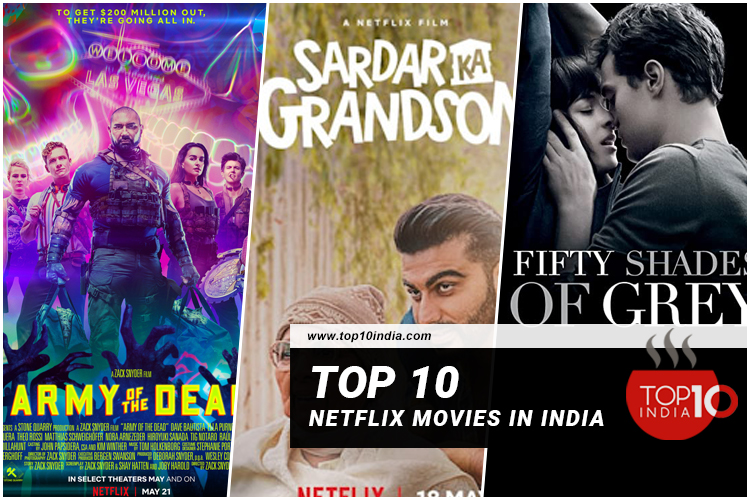 Top 10 Netflix Movies in India:- In the world of Entertainment, everyone loves to watch movies and videos. A Movie, also known as Film, is an art (visual) consist of stories, perceptions, various feelings, and ideas. Later, cinematography (Cinema in short) was used as the Film industry in art. It is a great achievement of Art. Nowadays, online entertainment is gaining a wide attraction all around the Globe. Below is the list of the top 10 Netflix movies in India.

There are so many options for online entertainment platforms in India. Some popular applications and websites are Netflix, Voot, Amazon Prime Videos, Zee5, Bigflix, Hotstar, Alt Balaji, Sony Liv, etc. Today we will discuss some top 10 Netflix Movies in India 2021. We have classified these movies based on their IMDB ratings in India.

Army of the dead is at the first position in the top 10 Netflix movies in India. It is an American Zombie heist film that Zack Snyder directed. Critics fully praised this movie for its action, humor, and cast. It was launched digitally by Netflix on May 21, 2021. This movie is about a great heist. A zombie outbreak in Las Vegas happens, and a group of mercenaries takes the ultimate gamble by venturing into the quarantine zone for the greatest heist ever. The group of zombies was intelligent and known as “Alphas.”

Sardar ka grandson is one of the best Netflix movies in India. This is an Indian Hindi language Comedy Drama Film. This movie was directed by Kaashvie Nair and written by Anuja Chauhan and Kaashvie Nair. It is a love story that is spanning three-generation, starting from 1946 and continuing till 2020. It shows a devoted grandson who tries to fulfill his Grandmother’s last wish that turns into a complicated cross-border affair. Netflix launched this movie on 18 May 2021 in the Hindi Language.

No.3- Fifty Shades of Grey

Fifty Shades of Grey is a famous English film you can watch on Netflix. It is an American erotic drama film. This movie was directed by Sam Taylor-Johnson, with a screenplay by the famous Kelly Marcel. This film is based on a popular novel with the same name written by the author E. L. James. In this movie, college senior Anastasia Steele goes in for her sick roommate to interview a businessman Christian Grey for their campus paper. Christian is rich and powerful and finds himself strangely drawn to Ana and she to him. Ana plunges headlong into an affair. This movie was most awarded at the 36th Golden Raspberry Awards.

The Kingdom is one of the best American action thriller films. This movie was directed by Peter Berg and written by Matthew Michael. This movie is based on the incident of the 1996 bombing over the Khobar housing complex, the Khobar Massacre 2004, and the 2003 bombings of four compounds in Riyadh. This movie was originally released in the English language on 28 September 2007. In this movie, Federal Agent Ron Fleury was charged with the most important assignment of his career and has one week to assemble a team, infiltrate and destroy a terrorist cell based in Riyadh, Saudi Arabia. Culture shock and opposition from local law enforcement combine to hinder his progress and that of his elite team. Still, a sympathetic Saudi police captain becomes an unexpected comrade-in-arms.

Wanted is another popular Netflix movie in India. It is a popular American Action Thriller Film Directed by Timur Bekmambetov and written by Michael Brandt, Derek Hass, and Chris Morgan. This movie is based on the comic book miniseries by Mark Millar and J.G. Jones. In this movie, Wesley Gibson is a loser cubicle rat abused by almost everyone in his life, including his boss, a local gang, his unfaithful girlfriend, and his best friend with whom his girlfriend is having an affair. The Action scene and performances of McAvoy gained the attraction of the viewers.

Cinema Bandi is one of the best Netflix Movies in India. It is an Indian Comedy-drama Film that Vasanth Maringanti wrote. This movie was originally released in the Telugu Language, later dubbed in Hindi and other languages. This movie shows a struggling rickshaw driver’s life who takes a rollicking turn when he comes upon an expensive camera. Then he decides to make a film with his fellow villagers. This film got premiered on Netflix on 14 May 2021. This movie got so much appreciation from the viewers.

Taxi Number 9 2 11 is an Indian comedy thriller film released in the Hindi language. It is a remake of a 2002 Hollywood film named Changing Lines. In this Movie, Raghav Shastri lives a double life, posing as an insurance salesman to his wife, but he is driving a cab in reality. When city rich kid Jai Mittal hails Raghav’s taxi to get to court and contest his wealthy father’s will, the duo is thrown together on a rollercoaster ride in a clash of class, attitude, and ego. This movie receives a massive response and success at the box office.

Last but not least, Roohi is in the tenth position in the list of top 10 Netflix movies in India. It is an Indian Comedy Horror film that Hardik Mehta directs. Mrighdeep Singh Lamba and Gautam Mehra write the story of the blockbuster film Roohi. The release date got postponed from June 2020 to March 2021 due to the Covid-19 pandemic in India. In this Movie, Two bumbling pals are hired to kidnap a bride. After the kidnapping, they find themselves in trouble when one falls for their abductee and the other for the spirit possessing her. The movie was released on 11 March 2021.

Which is the Best Movie on Netflix in India?

Army of the dead is considered the best movie on Netflix in India.

Which is the Best Web Series on Netflix in India?

Money Heist is considered the best Web Series on Netflix in India.

Which is the most Successful Film ever?

Gone with the Wind is considered the most successful film ever, with a Global collection of $3.4 billion.