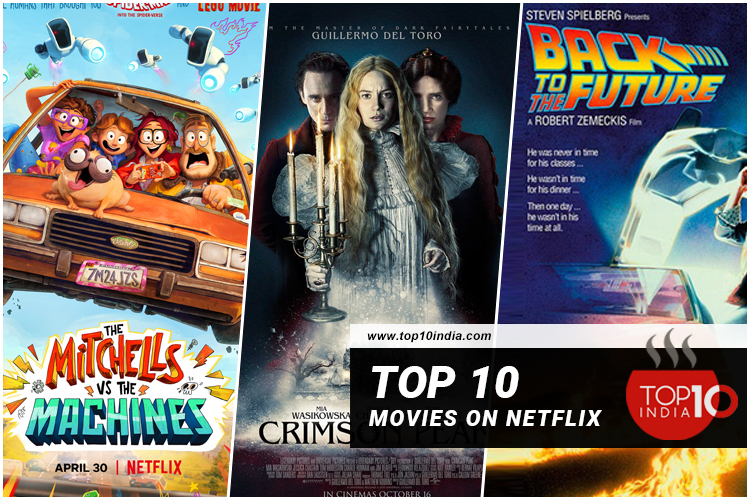 Top 10 Movies On NetFlix: A film, also called a movie, motion picture, or moving picture, is a work of visual art used to simulate experiences that communicate ideas, stories, perceptions, feelings, beauty, or atmosphere use of moving images. These images are generally accompanied by sound, and more rarely, other sensory stimulations. The word “cinema,” short for cinematography, is often used to refer to filmmaking and the Film Industry and the art form that results from it.

In this article, we are going to discuss the top 10 movies on NetFlix. This list will categorize these movies based on their watching, popularity, collection, IMDb rating, and many more details.  You have the entirety of Netflix at your disposal, including even a pared-down list of films you’ve already bookmarked to watch at a future date. But then there’s the choosing—the Mitchells Vs. The Machines movie is ranked in the first position in the list of top 10 movies on Netflix.

No.1 The Mitchells vs. The Machines

The director of the movie is Mike Rianda. The writer of the movie is Mike Rianda and Jeff Rowe. The starring cast of this movie is Abbi Jacobson, Danny McBride, Maya Rudolph, Mike Rianda, Olivia Colman, Fred Armisen, and Beck Bennett. The movie’s plot is the film finds a father and daughter struggling to connect and follows the family as the father decides they should take a road trip to send her off to college where she’s studying to be a filmmaker. Along the way, the robot apocalypse occurs, forcing them to work together to make it through. At every turn, The Mitchells vs. the Machines is surprising.

The director of the movie is Guillermo del Toro. The writer of the movie is Guillermo del Toro and Matthew Robbins. The starring cast of the movie is Mia Wasikowska, Tom Hiddleston, Jessica Chastain, and Charlie Hunnam. The movie’s plot is a story that follows an aspiring author (Mia Wasikowska) who meets a dashing English gentleman (Tom Hiddleston) and falls in love. The two quickly marry, and she moves to a remote part of England to live in an aging estate with her new husband and his icy sister (Jessica Chastain). The estate ends up being full of ghosts, and twists abound as our young protagonist finds herself in over her head.

No.3 Back to the Future

The director of the movie is Robert Zemeckis. The movie’s writer is Robert Zemeckis and Bob Gale, The starring cast of the movie, is Michael J. Fox, Christopher Lloyd, Lea Thompson, and Crispin Glover. The movie’s plot is The 1985 classic Back To The Future is a lot of things at once: a comedy, a sci-fi movie, a teen movie, a touching family drama. The fact that it works so well on so many different levels is a testament to Robert Zemeckis’ talent as a storyteller, as is the fact that it still feels relevant to what it’s like to be a teenager 25 years after it was released. The story basically posits what would happen if you went to high school with your parents, as teenager Marty McFly (Michael J. Fox) is sent back in time to prevent a catastrophic event, only to continue running into his parents at their high school.

The director of the movie is Ron Howard. The writer of the movie is Peter Morgan. The starring cast of the movie is Chris Hemsworth, Daniel Bruhl, Olivia Wilde, Alexandra Maria Lara, and Pierfrancesco Favino. The movie’s plot is the creator of The Crown teamed up with legendary director Ron Howard and two Marvel stars to make an exciting, racing drama – and nobody saw it. 2013’s Rush is a criminally underrated film, and it features one of Chris Hemsworth’s best dramatic performances as daring Formula One driver James Hunt. Cinematographer Anthony Dod Mantle tangibly conjures the 1970s aesthetic, and the racing scenes are wildly exciting.

The director of the movie is Ang Lee. The writer of the movie is Larry McMurtry and Diana Ossana. The starring cast of the movie is Heath Ledger, Jake Gyllenhaal, Michelle Williams, and Anne Hathaway. The plot of the movie is During their tenure, they develop a passionate sexual relationship that turns romantic, only for the complexity of their feelings – towards each other and towards themselves – to haunt them as the years go by. It’s an empathetic and emotional story, boasting a pair of powerful performances by Ledger and Gyllenhaal that will linger long after the credits have rolled.

The director of the movie is Antoine Fuqua. The writer of the movie is David Ayer. The starring cast of the movie is Ethan Hawke, Denzel Washington, Scott Glenn, Cliff Curtis, Dr. Dre, Snoop Dogg, and Eva Mendes. The film that won Denzel Washington his first Best Actor Oscar also still holds up pretty well as a nail-biting crime thriller. Training Day follows an LAPD officer named Jake (Ethan Hawke) on his first day as part of an evaluation by an esteemed narcotics officer named Alonzo (Denzel Washington). Still, as the day goes on, Jake discovers that not only is Alonzo corrupt, but the entire day is a set-up for which he could take the fall.

The director of the movie is Christopher Nolan. The writer of the movie is Christopher Nolan and David S. Goyer. The starring cast of the movie is Christian Bale, Michael Caine, Katie Holmes, Liam Neeson, Gary Oldman, Cillian Murphy, Morgan Freeman, and Ken Watanabe. The plot of the story is Casting Christian Bale in the lead role helped, but Nolan’s sprawling, Gotham-centric story feels more in line with a compelling character drama than a superhero movie—and that was by design. Batman Begins spawned two direct sequels and a trend in Hollywood of revitalizing franchises with the “gritty reboot” treatment, and this wholly influential redo still holds up over a decade later as a terrific Batman origin story.

No.8 The Dark Knight

The director of the movie is James Wan. The writer of the movie is Chad Hayes, Carey W. Hayes. The starring cast of the movie is Vera Farmiga, Patrick Wilson, Lili Taylor, Ron Livingston, Mackenzie Foy, Joey King, Hayley McFarland. The Plot of the movie is James Wan had already made a name for himself in the horror genre with mega-franchise starters SAW in 2004 and Insidious in 2010, and he pulled off the impossible once again with the 2013 pic, The Conjuring. This film was “so scary and intense” when Warner Bros. slapped it with an R rating even though there was no blood, gore, excessive violence, or profanity.

The director of the movie is Guy Ritchie. The writer of the movie is Michael Robert Johnson, Anthony Peckham, and Simon Kinberg. The starring cast of the movie is Robert Downey Jr., Jude Law, Rachel McAdams, Mark Strong, and Eddie Marsan. In the months following Iron Man’s blockbuster success, the movie’s plot is that Robert Downey Jr. doubled down by filming a very different kind of iconic role: that of Sherlock Holmes. Filmmaker Guy Ritchie brings his tough guy sensibilities to this 2009 adaptation of Sherlock Holmes, which positions Holmes as a bit of a superhero using slow-motion camera techniques and a punishing sound mix that makes you feel every punch landed by this surprisingly buff detective.

Based on research, here is the list of the top 10 Movies on Netflix. This article has classified these movies based on their watching, popularity, collection, IMDb rating, and many more details.

Please stay connected with us for further details. We will be keeping you updated from time to time.