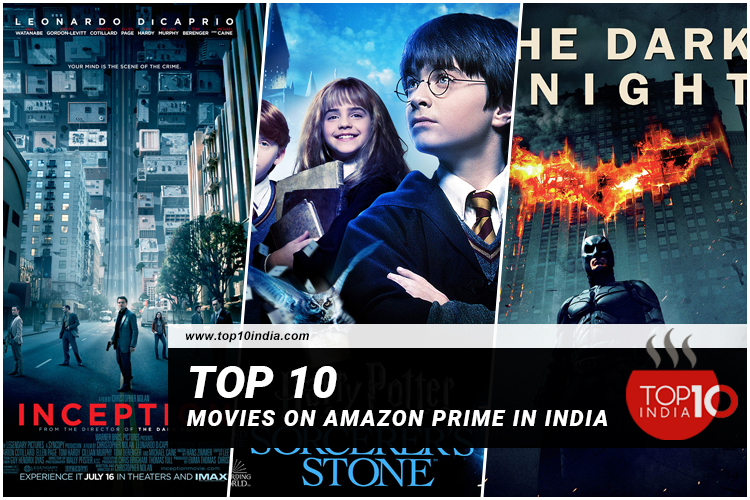 Top 10 Movies on Amazon Prime In India: Amazon Prime Video, or simply Prime Video, is a subscription video on demand over the top streaming and rental service of Amazon.com, Inc, offered as a standalone service or as part of Amazon’s Prime subscription. The service primarily distributes films and television series produced by Amazon Studios or licensed to Amazon, as Prime Originals (or Amazon Originals) or Exclusives. The service also hosts content from other providers, content add-ons, live sporting events, and video rental and purchasing services.

Inception is a 2010 scientific fiction action film. It is written and directed by Christopher Nolan and produced by Emma Thomas. The lead stars in the film are Leanardo De Caprio as a professional thief who steals information by infiltrating the subconscious of his targets. Dominick “Dom” Cobb and Arthur are “extractors”; they perform corporate espionage using experimental military technology to infiltrate their targets’ sunconsious and extract information through a shared dream world. Their latest target, Saito, reveals he arranged their mission to test Cobb for a seemingly impossible job: implanting an idea in a person’s subconscious, or “inception.”

Harry Potter is a series of seven fantasy novels. British author J.K. Rowling writes it. The novels chronicle the young wizard, Harry Potter, and his friends Hermoine Granger and Ron Weasely. The main story arc concerns Harry’s struggle against Lord Voldemort, a dark wizard who intends to become immortal, overthrow the wizard governing body known as the Ministry Of Magic. The wizarding world exists parallel to the Muggle world, albeit hidden and in secrecy. His magical ability is inborn, and children with such abilities are invited to attend exclusive magic schools that teach the necessary skills to succeed in the Wizarding World.

No.3 The Dark Knight

The Dark Knight is a 2008 superhero film directed, produced, and co-written by Christopher Nolan. Based on the DC Comics character Batman, the film is the second installment of Nolan’s The dark knight Trilogy and a sequel to 2005’s Batman Begins, starring Christian Bale. A gang of criminals robs a Gothan City mob bank, murdering each other for a higher share until only the Joker remains; he escapes with the money. Batman, District Attorney Harvey Dent, and Lieutenant Jin Gordon ally to rid Gotham of organized crime.

Justice League is a 2017 American superhero film based on the DC Comics superhero team of the same name. Produced by Ratpac-Dune Entertainment, DC Films, Atlas Entertainment, and Cruel and Unusual Films and distributed by Warner Bros Pictures, it is the fifth installment in the DC Extended Universe(DCEU) and the follow-up to Batman vs. Superman: Dawn of Justice. Thousands of years ago, Steppenwolf and his legions of Parademons had attempted to take over the Earth using the combined energies of the three Mother Boxes. The attempt was foiled by a unified alliance including the Olympian God, Amazon, Atlanteans, humanity, and extraterrestrial beings.

Bloodshot is a 2020 American superhero film based on the Valiant Comics character of the same name. It is intended to be the first installment in a series of films set within a Valiant Comics shared cinematic universe. Directed by David S. F. Wilson (in his feature directorial debut) from a screenplay by Jef Wadlow and Eric Heisserer and a story by Wadlow. After leading a successful rescue operation of hostages in Mombasa, U.S. soldier Ray Garrison, and his wife, Gina, travel for a holiday at an Italian beachside town on the Amalfi Coast. They are kidnapped by a group of mercenaries led by Martin Axe, who demands to know how the US military learned about the hostages and their location.

Wonder Woman is a 2017 American su[perhero film based on the Dc Comics character of the same name, produced by DC Films. in association with Rat Pac Entertainment and Chinese company Tencent Pictures, and distributed by Warner Bros Pictures. It is the fourth installment in the DC(DCEU). In present-day Paris, Diana Prince receives a photographic plate from Wayne Enterprises of herself and four men during World War I, prompting her to recall her past. The daughter of Queen Hippolyta, Diana is raised on the hidden island of Themyscira, home to the Amazons, women warriors created by the Olympian gods to protect humanity.

Transformers is a series of American science fiction action films based on the transformer franchise, which began in the 1980s. Michael Bay has directed the first five films: Transformers(2007), Revenge Of The Fallen(2009), Dark Of The Moon(2011), Age Of Extinction(2014), and The Last Knight(2017). Spielberg suggested that “a boy and his car” should be the focus. This appealed to Orci and Kurtzman because it conveyed themes of adulthood and responsibility, “the things that a car represents in the United States. The characters of Sam and Mikaela were the sole point of view given in Orci and Kurtzman’s first draft.

No.8 The Wolf Of The Wall Street

The Wolf of Wall Street is a 2013 American epic biological black comedy crime film directed by Martin Scorsese and written by Terrence Winter, based on the 2007 memoir of the same name by Jordan Belfort. It recounts Belfort’s perspective on his career as a stockbroker in New York City. In 1987, Jordan Belfort landed a job as a Wall Street stockbroker for L.F. Rothschild, employed under Mark Hanna. He is quickly enticed into the sex- and drug-fueled stockbroker culture and Hanna’s belief that a broker’s only goal is to make money for himself. Jordan loses his job following Black Monday, the largest one-day stock market drop in history.

Godzilla is a 2014 American monster film directed by Gareth Edwards. It is a reboot of Toho’s Godzilla Franchise. It is the 30th film in the Godzilla franchise, the first film in Legendary Monster Verse, and the second Godzilla film to be completely produced by a Hollywood studio. In 1954, Godzilla, a prehistoric alpha predator, is lured to Bikini Atoll to kill him with a Nuclear Bomb. In 1999, Monarch scientists Ishiro Serizawa and Vivienne Graham investigated the skeleton of a monster similar to Godzilla in a cavern unearthed by a collapsed uranium mine in the Phillippines.

Man of Steel is a 2013 superhero film based on the DC Comics character Superman. Warner Bros Pictures, Legendary Pictures, DC Entertainment, Syncopy, and Peter’s Entertainment, and distributed by Warner Bros. Pictures, is a British-American production and the first installment in the DC Extended Universe(DCEU). The planet Krypton is destabilized from the mining of the planetary core. Just before the planet explodes, Krypton’s supreme council chief advisor Jor-El infuses the genetics codex into his infant son, Kal El, the first naturally born Kryptonian child in centuries. Jor-El manages to send Kal-El in a spacecraft toward Earth before being killed by General Zod during an uprising.

Q- What movies are trending on Amazon Prime?

A- In this article, we have discussed the top 10 movies available on Amazon Prime. In this list, all the trending and the famous movie have been discussed. Rather than these movies, more movies like One night in Miami, Sound of Metal, and many more movies.

Q- Which is the best movie On Amazon Prime?

A- Inception is to be said as one of the best movies on the Amazon Prime Video.

Amazon Prime is no joke when it comes to the TV shows and movies you love. No matter your preferred genre—rom-com, thriller, sci-fi, action, Oscar-winning films.