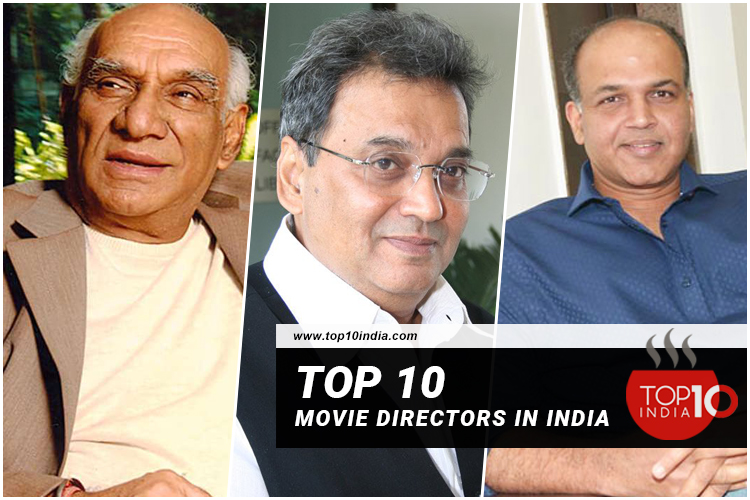 Top 10 Movie Directors in India: In India, movies are a part of the life of Indians. Indian loves to watch movies that contain- action, thrill, romance, and many more things. And to fulfill this demand f audience, directors make films that consist of a great story and uniqueness.

Bollywood movies are one of the most favorite things of Indian people. Indian people love to watch movies that entertain them. And the directors of movies know what their audience wants. So they make movies that create positive and great vibes in their audience. Here is a list of the Top 10 Directors in India. These directors have given us a huge number of great movies.

Yash Chopra is the most known Indian director and producer. He started his Bollywood journey in the year 1959 by directing ‘Dhool Ka Phool’ social drama. This film became the fourth highest-grossing film of that year. After this, Mr. Chopra directed also directed some movies – ‘Waqt,’ ‘Aadmi Aur Insaan,’ and ‘Ittefaq.’ In 1970, he founded his independent ‘Yash Raj Films’ in partnership with his brother. ‘Daag – A Poem Of Love’ was the first movie that the Yash Raj Films produced. Mr. Chopra mostly works with the same actors and actresses. Amitabh Bachan, Shashi Kapoor, Waheeda Rehman, Rakhee, and Sharukh Khan were the most seen cast in the Yash Raj Films. Some world-famous films of Yash Chopra were – Deewar, Darr, Dil To Pagal Hai, Dilwale Dulhaniya Le Jayenge, Veer-Zara, Chak De India, Chandani, Fanna, Mohabbatien, Saathiya, and many more. Mr. Chopra has given some great love stories to the Bollywood film industry. His many films have won – National Film Awards, Filmfare Awards, and Bollywood movies award.

Subhash Ghai is a Hindi film director, producer, and screenwriter. He started his film industry journey by participating in United Producers Filmfare talent contest. 5000 participants took part in it, out of which three were selected – Subhash Ghai, Rajesh Khanna, and Dheeraj Kumar. After a year, he got small roles in movies like – Taqdeer and Aradhana. Later, he got the lead role in Umang and Gumraah films. His directing journey started in 1980, and he directed Vidhaata, Karma, and Saudagar. He also won Filmfare Best Director Award for these films. Subhash has directed many hits movies like – Hero, My Jung, Ram Lakhan, Trimurti, Khalnayak, Pardes, Taal, Aitraaz, and Apna Sapna Money Money.

Ashutosh Gowariker is a director, actor, screenwriter, and producer of India. Ashutosh started his film industry journey as an actor in 1984 by film ‘Holi.’ He has also worked in TV shows – CID and Circus. He started his directing journey in 1993 with the film ‘Pehla Nasha.’ His directing career took a leed after the release of his period epic movie ‘Lagaan.’ Some most popular films of Ashutosh are – Swades, Jodha Akbar, What’s Your Rashee?, Mohenjo Daro, Baazi, and Panipat. His movies Lagaan. Swades and Jodha Akbar has many awards for the story, direction, and dialogues.

Rajkumar Hirani is a film director, producer, screenwriter, and editor. He started his journey as a film editor but didn’t get successful. So he started directing and producing advertisement films. But he wanted to make films, so he started working with Vidhu Vinod Chopra. He worked as a film editor in the movie ‘Mission Kashmir.’ He started his directing journey in 2003 with the movie ‘Munna Bhai M.B.B.S.’ This movie was a great hit and collected a worldwide total of ₹330 million. Some most popular movies of Rajkumar are – Lage Raho Munna Bhai, 3 Idiots, PK, and Sanju.

Imtiaz Ali is a film director, producer, and writer of India. He started his career directing tv shows like – Kurukshetra and Imtihaan. He directed his first movie ‘Socha Na Tha’ in 2005. His second film ‘Jab We Met’ turned out to be a blockbuster movie and took his journey towards success. Imtiaz founded his production company, ‘Window Seat Films,’ and produced its movie ‘Highway.’ He is also the writer of the excellent movie ‘Cocktail.’ He also directed the two most romantic movies. Bollywood- ‘Rockstar’ and ‘Love Aaj Kal.’ Every movie is a unique story with a lot of love and romance. These movies will fill you with a lot of love and romance.

Siddiqui is a director, actor, story writer, and producer in Indian cinema. He started his career as an assistant director of Aleksa Muhammed Fazil. Later, he teamed up with M. P. Michael and created many films, credited as ‘Sidiqque-Lal.’ he has also worked as an actor in movies – Five Star Hospital, Gulumaal: The Escape, Cinema Company, and Masterpiece. He has also produced two films – Fukri and Big Brother. Some of his most popular films are – Ramji Rao Speaking, In Harihar Nagar, Godfather, Hitler, Friends, Finger Print, Maaro, Bodyguard, King Liar, and Bhaskar Oru Rascal.

S.S Rajamouli is an Indian director and producer that works in Telugu cinema. He started his career by directing Telugu soap operas. Later he directed a TV series, ‘Santhi Nivasam.’ The first that he directed was ‘Student No.1’ in the year 2001. Then he directed 2-3 more movies, but they didn’t become much successful. After taking some breaks, he collaborated with Ravi Teja in the movie Vikramarkudu, leading him towards success. This film was remade in three languages – Kannada (Veera Madakari), Tamil (Siruthai), and Hindi (Rowdy Rathore). After this, he directed the movie ‘Magadheera’ and this movie was the highest-grossing Telugu film. He also directed an action movie, ‘Maryada Ramanna,’ and this movie was remade in Hindi as ‘Son Of Sardar.’ The most epic film he directed in his whole career was ‘Bahuballi: The Beginning, and it was the highest-grossing Indian film. The movie Bahuballi has two parts are both parts are incredible and mesmerizing.

Rajkumar Santoshi is a director, producer, and screenwriter of Hindi films. He started his career as an assistant director of Govind Nihalani. Then he directed his first film, ‘Ghayal,’ which was a hit movie. And then he launched ‘Damini’ in 1993. After two serious movies, he wanted to make a different kind of movie. So he directed the movie ‘Andaz Apna’ in 1994, which still has a huge fanbase. His movies – Ghayal, Damini, Ghatak, China Gate, Pukar, Andaz Apna Apna, The Legend Bhagat Singh, and Khakee have won many awards. In 2009, his movie ‘Ajab Prem Ki Gajab Kahani’ was the 4th highest-grossing Bollywood movie.

Karan Johar is a film director, producer, screenwriter, costume designer, actor, and television personality of India. Karan started his career as an assistant director of Aditya Chopra. The first that he directed was ‘Kuch Kuch Hota Hai’ in 1998, and this movie turns out to be a blockbuster movie. After this, he directed ‘Kabhi Khushi Kabhi Gham’ and ‘Kabhi Alvida Na Kehna,’ a .’ Theseies were also the hits of the time. Karan has also produced many films – Kal Ho Na Ho, Dear Zindagi, Yeh Jawani Hai Deewani, Dostana, Raazi, Dhadak, and Simmba. These movies are just amazing. He has also hosted a famous show, ‘Koffee With Karan.’ KJo has judged many shows like – India’s Got Talent, Jhalak Dikhlaja, and India’s Next Superstar. He has also worked as a costume designer for Shah Rukh Khan in movies – Dil To Pagal, Main Hoo Naa, Veer-Zara, Duplicate, and Om Shanti Om. In 2020, He was also honored with the Padma Shri.

Rohit Shetty is a Bollywood director and producer. He started his career at the age of 17 as an assistant director in the movie ‘Phool Aur Kaante.’ The film movie directed by him was ‘Zameen’ in 2003. In 2006, he directed the first part of ‘Golmaal,’ which became the hit of that time. In 2008, he released the sequel of ‘Golmaal,’ and it was also a hit. In 2010, he directed the third part of ‘Golmaal .’ This movie was his first movie that entered the 100 Crore Club. After this, he directed ‘Singham’ and ‘Bol Bachan movies, and both movies were also blockbusters. In 2013, his movie ‘Chennai Express’ became the highest-grossing Bollywood film. He has also hosted a tv show, ‘Khtron K Khiladi.’

In the present time, Subhash Ghai is the No. 1 Director in India.

3. Who is the greatest director of India of All-time?

Yash Raj Chopra is no more, but he has directed many best movies of All Time.